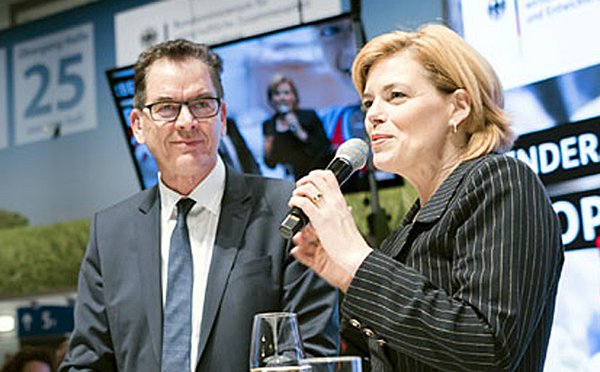 Germany’s Federal Minister for Food and Agriculture Julia Klöckner (BMEL) and German Federal Minister of Economic Cooperation and Development Gerd Müller (BMZ) presented a 10-point plan for sustainable cocoa at the International Green Week at the end of January 2019. The plan aims to reinforce and concretise the German government's efforts to ensure that, in the long term, 100 per cent of the products containing cocoa that are sold in Germany come from sustainable production.

More than 85 per cent of cocoa in Germany is produced in the West African countries of Nigeria, Ghana and Côte d’Ivoire. In Côte d’Ivoire, cocoa harvesting earns a seven-member farmer family around 170 euro. This hardly covers their living costs. The results are poverty, hunger, and also child labour. Alone in West Africa, around 2.3 million children are working in cocoa plantations.

As a cocoa producing and consuming country, Germany intends to lead the way forward with the “Sustainable Cocoa Forum” initiated by the two Federal ministries. The German confectionary and food industries, civil society and the Federal Government have joined forces to promote sustainable cocoa cultivation, resulting in the share of sustainably produced cocoa rising from five per cent in 2011 to what is now around 60 per cent in Germany.

In the long term, 100 per cent of the cocoa in Germany is to be produced and traded under fair conditions. This is why the BMZ and the BMEL have defined common goals for a sustainable cocoa sector in their 10-point plan. The aim of the plan is to achieve a fair income for the producers and to fight poverty and child labour in a sustainable way.

Federal Minister Müller said: "Chocolate is the most favourite sort of sweet in Germany, but chocolate still has a bitter side: starvation wages, poverty, child labour and deforestation of the rainforests must finally be a thing of the past."

Federal Minister Klöckner added: "With the 10-point plan, we are sending out a strong signal and are tackling the problems in cocoa cultivation. We stand up for forest conservation, and we also want to strengthen the role of women in cocoa production. Specifically, for example, we are supporting the ‘Pro Planteurs” project with over EUR 300,000, which trains farmers, especially women farmers, in sustainable cocoa production and thus creates perspectives on the spot. This has a model character.”

Pro Planteurs is a joint project of the German Initiative on Sustainable Cocoa together with the German and the Ivorian government. With this project, the German Initiative on Sustainable Cocoa aims to professionalise 20,000 cocoa-producing family-owned businesses and farmer organisations in the south-eastern regions of Côte d'Ivoire. In particular, the project’s objective is to provide women with opportunities to improve their income situation and create a better nutritional basis for their families with the help of additional crops. Furthermore, the project aims at contributing to making cocoa production more attractive and appropriate again for young male and female cocoa farmers.