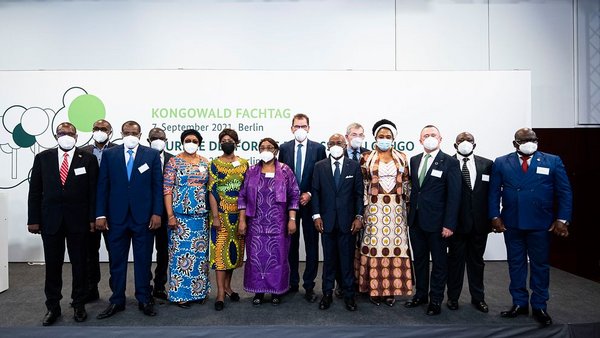 Representatives of the Congo Basin countries with Germany’s Development Minister Gerd Müller at the signing of the Declaration on the Protection of the Rainforest in Berlin.
Photo: ©Florian Gärtner/phototek

Calling for a ‘New Deal’ for forest protection

Together with representatives of the ten countries around the Congo Basin rainforest, Germany’s Development Minister Gerd Müller has signed a declaration for better protection of the tropical rainforests worldwide. The signing of the declaration marked the opening of the Tropical Forest Symposium in Berlin, Germany, in early September.

The German Federal Ministry for Economic Cooperation and Development (BMZ) currently holds the rotating presidency of the Congo Basin Forest Partnership of the Central African Forest Initiative (CAFI). Development Minister Gerd Müller therefore took the opportunity to invite representatives of the ten countries around the Congo Basin to a hybrid Tropical Forest Symposium, in the margins of which they signed a declaration on protecting the rainforest on the 7th September 2021.

Greater protection efforts by the ten countries together with sustainable forest management and forest protection measures are at the heart of the declaration. In return, countries like Germany commit to increased support for the tropical forest countries in Central Africa.

"Saving the climate and biodiversity cannot be accomplished without the world’s tropical forests. They account for about 20 per cent of terrestrial carbon sequestration,” Müller emphasised at the opening of the Symposium in Berlin.

He said that these forests were home to 75 per cent of all animal and plant species. “But the planet’s green lungs are in danger,” Müller warned. World-wide, an area of forest the size of a football pitch is being cleared every four seconds. The destruction of rainforests through slash-and-burn methods in places like the Amazon, Indonesia or the Congo Basin is responsible for eleven per cent of global CO2 emissions.”.

“Experts estimate that by 2100, no more rainforest will be left in the Congo Basin,” Müller explained. “The consequences will be devastating for the whole of humanity, because the Congo Basin is the second-biggest tropical forest in the world after the Amazon rainforest and the biggest CO2 sink. The African rainforests hold more CO2 than all other forests."

"We must stop the slash-and-burn and forest destruction immediately," Müller continued. “We need a ‘New Deal’ for forest protection. Today, at the Berlin Tropical Forest Symposium, I received a commitment from all ten of the Congo Basin rainforest countries to step up their forest protection and strengthen their sustainable forest management.”

According to a BMZ press release, the Declaration signed was drawn up jointly with scientists and civil society representatives from the ten countries. Germany is supporting this process via the Central African Forest Initiative (CAFI). The goal is to protect and restore 127 million hectares of forest by 2030. The protection measures include transparent supply chains for timber from the region, economic alternatives for the local people and closely involving the indigenous population as ‘forest guardians’.