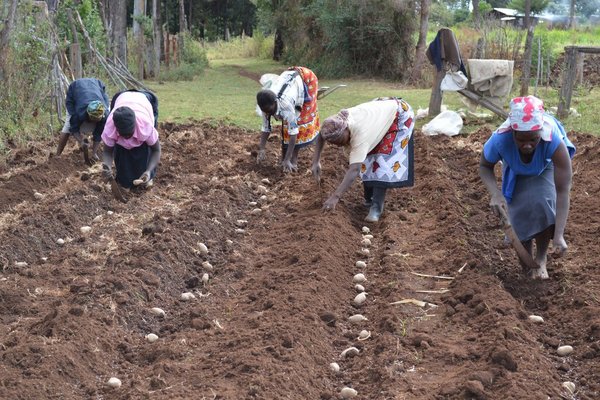 GIZ has trained more than 11,000 smallholders in Kenya in sustainable potato growing and marketing since 2016.
Photo: ©GIZ

Since 2016, Deutsche Gesellschaft für internationale Zusammenarbeit (GIZ) has trained more than 11,000 smallholders in Kenya in sustainable potato growing and marketing in the context of the Farmer Field and Business Schools, FFBS, with its global project “Promotion of Nutrition-Sensitive Potato Value Chains in East Africa”.

Higher yields and prices, or in other words, more income, is what many potato farmers in Kenya hope for. The way to achieve this involves interaction between more sustainable management and improved market access together with successful entrepreneurship. Kenyan potato farmers can acquire the knowledge and knowhow needed for this at the Farmer Field and Business Schools (FFBS) of the global project run by Deutsche Gesellschaft für internationale Zusammenarbeit (GIZ) called “Promotion of Nutrition-Sensitive Potato Value Chains in East Africa”. The project has been successful in supporting the participants with adopting Good Agricultural Practices (GAP).

In Kenya’s potato-growing regions, in cooperation with local administration and the latter’s extension services, the project backs getting the farmers at village level organised in groups of 20 to 25 people.

These farmers follow a curriculum adapted to potato growing to which they can add individual focal areas. The elements of the course include the right choice of seed, preparing the soil and nutrient management and crop sequencing, as well as calculating the required volume of finance and working out expected income as well as the correct approach to harvesting, sorting and storing of potatoes to be sold, consumed or sown next time.

Insights gained are always applied in practice, and success is made visible. Since learning by doing plays a crucial role for the FFBS, a demonstration patch is commonly cultivated. Thanks to cooperation with the International Potato Center (CIP), which maintains a large number of innovation plots for training purposes, new insights in potato growing are added to the training syllabus of the participants (for example integrated plant protection for handling leaf and potato blight, the potential of new varieties or the significance of crop rotation and sequencing). Farmers’ feedback also finds its way into the research activities of the CIP.

Since 2016, the project has run 619 FFBS in Kenya, reaching out to 11,265 potato farmers, 59 per cent of them women. The graduates from these courses demonstrably apply around 70 per cent of the practices which they have learnt in their smallholdings. In addition, a total of 292 farmers as well as 110 agricultural extension consultants have been trained as FFBS trainers in order to directly pass on and locally establish knowledge which they have acquired.

Thanks to the farmers’ field schools, the smallholdings involved were able to raise their potato yields from an average of roughly 8.0 tonnes per hectare (t/ha) in 2016 to 12.63 t/ha in 2020 – with positive income effects.

A precise analysis showed that the improved application of the GAP had a clearly positive impact on income in the form of the marginal return per hectare, and that under long-term review, the running of the fields schools resulted in a cost-benefit ratio of at least 1:20 (Vagliano, GIZ 2019). The most important factors for this positive development are careful sorting and classifying of the harvest as well as choosing and using one’s own, certified seed and the introduction of top dressing.

The training and upgrading approach of the FFBS also promotes access to better marketing and services, such as soil analysis and the use of machinery. Furthermore, the integration of the FFBS in healthcare and nutrition counselling has proven to be a success factor. Thus improved agricultural and entrepreneurial skills as well as better knowledge of food issues create prospects for a sustainable life and food situation.

Ann Waihuini King'ori visited the Githunguchu FFBS in Nyandarua District in 2018. The 37-year-old farmer attended this upgrading measure because she wanted to know how she could sustainably enhance her potato production. Her wish was to shift from subsistence agriculture to profitable potato growing. By applying the practices she learnt, Ann has since succeeded in more than doubling her production. In addition, with the aim of tapping better sales markets for her table potatoes and procuring inputs together, and hence at more favourable prices, she joined forces with 40 other farmers. After the group had been trained in organisational development and business management aspects such as collective marketing and procurement, it could officially be registered as a farmers’ organisation. Thus Ann can now engage in formalised contract farming, improve her marketing conditions and plan long-term. 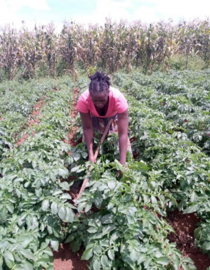 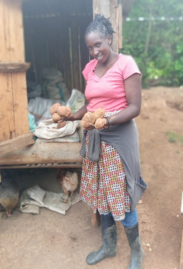