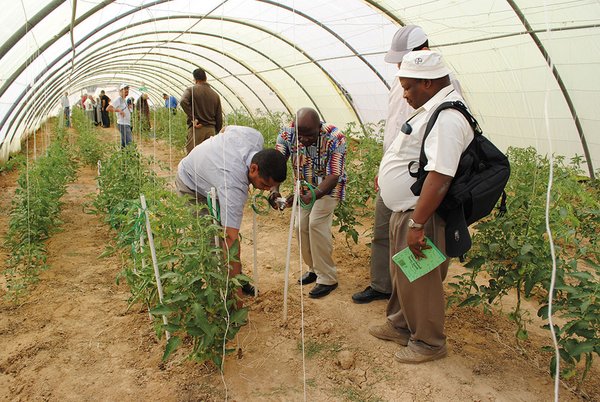 Saving water and energy with an intelligent subsurface irrigation system

Investigations have been carried out by a research group at Kassel University aimed at adapting the auto-regulative potential of the old clay pot (pitcher) irrigation system to modern and up-to-date irrigated agriculture. Within the frame of several international projects the new irrigation technique was developed and tested. Various stakeholders were involved in spreading the innovation among a broader community.

It was a simple idea. A permeable pipe filled with water buried in the ground near your plants makes sure that they will not suffer from water shortage. And your only job is to make sure that your pipe is always filled with water. With that technical solution, you will save water and energy while providing an optimal soil water content for your plants (near field capacity). This simple approach was adopted from the old “pitcher” (clay pot) irrigation method.

A technology known for centuries

Clay pot irrigation is a type of subsurface irrigation which has been known in arid and semi-arid areas for thousands of years. The unglazed porous clay pot is embedded in the ground and filled with water which eventually drains through the porous pot wall. One special feature of this irrigation method is its auto regulation ability (Abu-Zreig et al. 2006, Stein 1997, van Sen et al. 2007), which arises from the close interaction between the pot and its environment, namely the plant, the soil and the soil water tension. Thanks to their specific material properties, the pots deliver water to the soil when it is dry, soil water tension is high, and the crop is suffering water stress. Once soil humidity rises, soil water tension will decrease and the water flow will eventually decrease or even stop. The decisive parameters for the efficient operation of pot irrigation are the porosity and the hydraulic conductivity of the pot material (Stein 1996, Dührkoop 2008, Dührkoop 2011, Abu-Zreig et al. 2006).

Clay pot irrigation is simple, low-cost, requires only a low pressure head, and can be manufactured from local materials (Stein 1994, Batchelor et al. 1996, Zarei et al. 2003, Klingler 2005). The disadvantages of pot irrigation are its mechanical sensitivity, leading to an exclusion of mechanised agriculture, and the high level of labour required (Lungu 1996). Moreover, longevity of the pots is often unsatisfactory (Klingler 2007).

Subsurface drip irrigation or SDI is another subsurface technique. The American Society of Agricultural Engineers (ASAE) defines SDI as the “application of water below the soil surface through emitters, with discharge rates generally in the same range as drip irrigation” (Camp 1998). The advantages of SDI are its suitability for mechanised installation, options for use at large scale, and a long life expectancy (Lamm et al. 2012). One drawback is that the system needs energy to provide pressure for water release through the emitters.

Combining the best of both systems

An optimised, highly efficient irrigation method may be achieved by combining the advantages of SDI and clay pot irrigation, while avoiding their disadvantages. Advantages that SDI and clay pot irrigation share are the water release in the plant rooting zone, a dry plant surface, a dry soil surface and, consequently, low losses through evaporation and deep percolation, with the latter depending on SDI proper management.

A research project (2011–2013) within the frame of the support programme “Sustainable Solutions for Sub-Saharan Africa” financed by the German Federal Ministry of Education and Research (BMBF) was conducted at the Department of Agricultural and Biosystems Engineering at Kassel University, Germany, in order to develop a new environment-friendly and water-saving irrigation technology. The innovation consists of a flexible porous pipe made of high-tech polymer membrane material. Laboratory and small-scale irrigation tests had led to the assumption that this irrigation pipe had auto-regulation properties. In the project, activities focused on field testing, research and development on the membrane pipe. The project partners involved comprised universities, research institutes and industry from Algeria, Kenya and Germany.

Four field test sites were selected to represent different climate, soil and operation conditions, which led to a broad scope of test conditions for the irrigation pipe. The climate varied between Mediterranean (Algiers, in the North of Algeria, mean precipitation 600 mm, annual evapotranspiration 1,200 mm), arid (Biskra and Touggourt, southeast of Algeria, annual precipitation 100 mm, annual evapotranspiration 2,000 mm) and temperate climate (Nakuru, central Kenya in the highlands, mean precipitation 1,000 mm). Soils ranged from clayey with a high content of gypsum through loamy textured (saline) to sandy soils in the desert regions.

Greenhouses were equipped with both the membrane pipes and common local drip irrigation techniques to compare in terms of water consumption, crop development (yield) and use of marginal water (high salt content, high load of suspended solids, wastewater). The installation depth of the membrane pipe was 25 to 30 cm, and the distance depended on the type of soil. In heavy soils (clayey, loamy), the distance was 50 to 70 cm, and in light soils (sandy) 30 to 40 cm. Wetting capillarity was a crucial factor. The crops cultivated were tomatoes, beans, pepper, cucumbers and egg plants.

In all experimental fields, it was stated that the soil surface was dry, and no or significantly fewer weeds were observed in contrast to when surface drip irrigation was used. This is owing to the fact that water is only provided in the plant’s root area and losses through evaporation are ruled out. The dry soil surface prevents weeds from growing.

One test site in Algeria was in Biskra (see right Photo on page 36), bordering on the Sahara in an arid region. Results showed a 60 per cent higher yield (tomatoes) with 48 per cent less irrigation water compared to drip irrigation when using low quality/ salty irrigation water (4.69 decisiemens per metre). The supply of water directly on the soil surface with the drip irrigation quickly led to salt incrustations. This was not observed on the membrane pipe plots. When using water with a high content of suspended solids (e.g. dam water), the membrane pipes show a decrease of water flow through clogging (fouling) of the porous pipe. This needs to be monitored during operation, so that the system can be adjusted by introducing filters or by frequent flushing of the pipes.

The project showed promising results and led to more engagement in subsurface irrigation in order to promote this efficient system. A follow-up project, financed by Germany’s Federal Office for Agriculture and Food (BLE, 2013–2016), was initiated to establish links between projects dealing with subsurface irrigation (SI) methods in Algeria, Kenya, Turkey, Germany and Namibia. The SI techniques concerned were: subsurface drip irrigation, porous hose and the newly-developed “auto-regulative” system. Each project conducted an analysis of various SI methods in field trials under local conditions in terms of water productivity, use of low-quality water, salinity effects in the soil and socio-economic aspects. Results were presented at farmer field days held during the individual projects. In addition, the combined results were summarised in guidelines for stakeholders, farmers, water managers, water authorities and ministries (Dührkoop & Hensel 2018).

Up to now, the labour-intensive installation procedure – digging thousands of metres of trenches – has been a major hindrance to the large-scale application of subsurface irrigation. Since 2018, a group of scientists from the above-mentioned institute have been developing efficient and low-cost installation machinery for mechanised installation of subsurface irrigation pipes. It enables pipes to be installed with minimal disturbance of soil and vegetation. The technology is being produced and marketed by a German start-up company, with first sales to clients from Southern Europe and Northern Africa. Expansive marketing activities are currently starting in close cooperation with major irrigation technology providers.

Andrea Dührkoop is a postdoctoral researcher at Kassel University’s Department of Agricultural and Biosystems Engineering. Her focus is on irrigation and water resources.
Contact: duehrko(at)uni-kassel.de

Dührkoop, A. (2008): Material parameters for a combination of subsurface and clay pot irrigation. - Diploma thesis, University of Rostock.