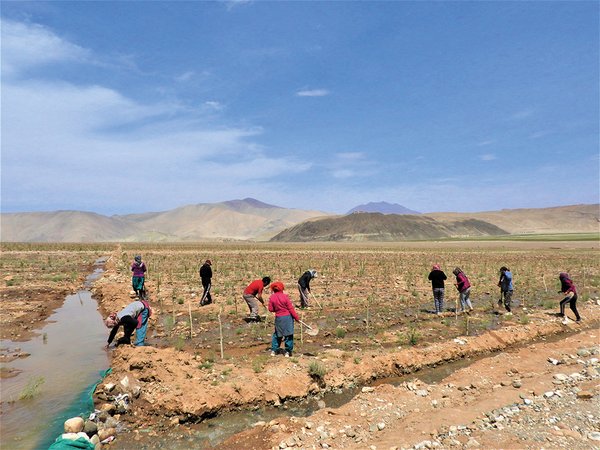 Greening a cold desert in the Himalayas – boon or bane?

Planting trees to tackle the impacts of air pollution and climate change – a measure which would appear to suggest itself. However, scientists warn against negative effects this could have in fragile ecosystems. The cold desert of Ladakh in the western Himalayas is one such system.

Gyan Thinlay is happy to soon see a huge area in his village going green. He is the man in charge of nurturing a newly set up nursery of 150,000 tree saplings with the help of his fellow villagers. The trend of planting trees is growing in Chushul, a village in eastern Ladakh, a cold desert in the western Himalayas near the border between India and China. Often called the “Roof of the World”, little grows in the Ladakh Himalayas, where average elevation is 3,353 metres above the sea level and temperatures swing between minus 35 degrees Celsius in winters and 35 degrees in the summer. Annual rainfall in the region is less than 100 millimetres. With its altitude of more than 4,270 metres, Chushul lies even higher up than most areas of Ladakh. Yet this did not discourage the villagers from going for massive tree plantation in a huge area in their village. “All we see around us is barren mountains. We now look forward to see greenery too,” says Thinlay, the Buddhist monk and deputy chairman of Go Green Go Organic Ladakh, the non-profit organisation behind the afforestation project. Thinlay is excitedly watching villagers irrigating the tree saplings which they planted this June, on the eve of World Environment Day. The water comes from a small stream which is fed by glacier-melt from June to October. When glacier-melt is not available in early summer, the villagers use solar powered motors to irrigate the tree saplings with ground water.

Benefits for livelihoods and the environment

Besides the greenery and fresh air, the trees are to help insects grow around them to make it easy for birds to feed on them. And they are to support livelihoods of villagers. People in Chushul traditionally depend on livestock rearing and have not shown interest in large-scale tree plantations so far, says the Councillor of the village, Konchok Stanzin. “But since 2015, our religious leader, His Holiness Chetsang Rinpoche, has informed people about the environmental and economic benefits of trees such as their role in reducing air pollution, feeding livestock and supporting the construction industry. This has attracted people towards tree plantation,” Stanzin notes, adding that villagers in other parts of his constituency have participated in tree plantation drives thrice since 2019.

The tree plantation drive in the region is not only backed by the religious leaders. The planting project has been supported by the forest department and the local administrative council, which are both government institutions. Soon after the plantation drive in Chushul on the 5th June, a tweet was put out on the official twitter handle of M. K. Mathur, Ladakh region’s administrative head, lauding the effort.

This support is not a coincidence. In India, a massive push to develop infrastructure is intensifying deforestation, a major driver of climate change. As much as 554 square kilometres of forest area has been diverted for non-forestry use in the last three years – for constructing roads, hydroelectric projects and other infrastructure construction. In the cold desert of Ladakh, where people have lived in traditional ways, such as by building houses with mud and wood and using dry toilets, construction activities and vehicular traffic have witnessed a sharp increase. “In my view, the number of vehicles in Ladakh has increased tenfold in the past few years and the region has also witnessed a construction boom,” says Nordan Otzer, a prominent social and environmental activist in Ladakh. 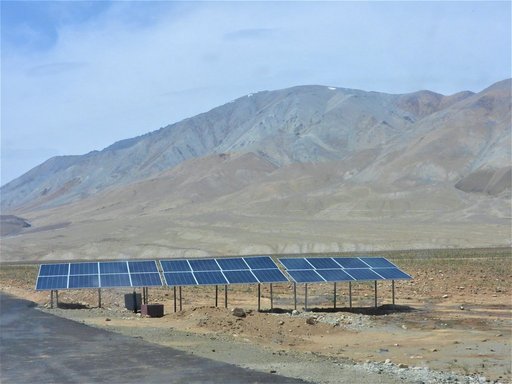 Solar energy is used to irrigate the tree saplings with ground water in early summer,
when glacier-melt is not available. Photo: Athar Parvaiz

Planting trees in a cold desert – ‘not cool’

Like most people in the region, environmental activists such as Otzer believe that planting trees in the desert will help reducing pollution and will lend a green look to Himalayan desert where the landscape is dominated by bare mountains. But scientists are not convinced as they assert that “mindless” tree-planting on a massive scale will damage the fragile and unique ecosystem of the cold desert. “Planting trees in deserts can be as harmful as cutting trees in forests,” Abi Tamim Vanak, senior fellow at Ashoka Trust for Research in Ecology and the Environment (ATREE), Bengaluru-India is convinced. The native fauna and flora of Ladakh, including the snow leopard, blue sheep and other wildlife, were not adapted to forested ecosystems, Vanak maintains. “Creating plantations, especially in areas where people don’t reside could harm native habitats and make them unusable for wildlife,” he states.

Moreover, trees require a lot of water, and this could increase aridity in areas that already face water stress, Vanak adds. He explains: “In effect, trees in the wrong places can ‘steal’ water from desert-adapted shrubs and herbs, and thereby outcompete them, resulting in less food for wildlife.”

Impacts of climate change are on the increase in the cold desert of Ladakh. “Although it is difficult to say that it is happening because of climate change, we have noticed some changes in weather patterns in the Ladakh region in recent years. Glaciers are melting fast while rain and snow patterns have undergone changes with extreme weather events such as cloudbursts occurring with more frequency,” says Mukhtar Ahmad, a scientist with the Indian Meteorological Department. To spread awareness about changing climate in Ladakh, young people in villages along the Pangong Tso Lake in the cold desert have started making arrangements for organising a 22 kilometre run over the frozen Lake in February 2023, naming it “The Last Run”, as they apprehend that the Lake might not freeze in coming years because of climate change.

Farmers in Ladakh say that because of unreliable water supply from glacier-melt, they increasingly depend on bore-wells to irrigate their farms. Cham Dolma, a 56-year-old farmer of Leh town, reports that her family had to spend 150,000 rupees (USD 1,900) a year on irrigating their farm near the house and on maintaining a sustainable supply of drinking water for the household. “What else can we do? We are only able to get a constant supply of water when it sufficiently snows during winter,” Dolma explains.

Forrest Fleischman, an Associate Professor at the Department of Forest Resources at the University of Minnesota, USA, is convinced that establishing tree plantations where forests did not historically occur destroys the habitats of plants and animals adapted to open ecosystems and threatens the livelihoods of people dependent on those ecosystems to produce wild game and domestic livestock. “The iconic savannahs of Africa are a prime example of the ecosystems that are threatened by large-scale afforestation campaigns,” he says. “Avoiding deforestation, improving forest management and protecting grasslands, peatlands and shrublands from land-use conversion should be the priority,” Fleischman maintains, quoting from the Paper Pitfalls of Tree Planting he published with co-authors in Nature in May this year. In their publication, the authors have also analysed the effects of tree planting on water resources. They come to the conclusion that large-scale tree-cover expansion can increase water availability by up to six per cent in some regions, while decreasing it by up to 38 per cent in others. They also stress the divergent impact on large river basins: some rivers could lose six per cent of their stream-flow due to enhanced evaporation, while for other rivers, the greater evaporation is counterbalanced by more moisture recycling. The publication has further concluded that several so-called hot spots for forest restoration could lose water, including regions that are already facing water scarcity today. “Tree restoration significantly shifts terrestrial water fluxes, and we emphasise that future tree-restoration strategies should consider these hydrological effects,” the paper states.

Jigmat Takpa, the former Joint Secretary in India’s Ministry of Environment and a Ladakhi himself, does not share these concerns for his region. “If you plant trees in one or two square kilometres out 57,000 square kilometres, how can it damage the desert?” he asks, adding that “trees will rather help reducing pollution and absorbing carbon emissions”. The Indian government has not given any estimate or plan of how much land it intends to bring under plantation. Stanzin Dolker, a young woman who was tending to the newly planted trees along with a group of other villagers, expresses hope that the trees will give a new look to her village. “We will make sure that each of these saplings grows into a tree. This is our resolve. We will work hard to irrigate them and help them grow,” she says. For Go Green Go Organic, planting trees is part of the organisation’s vision towards living sustainably in harmony with nature.