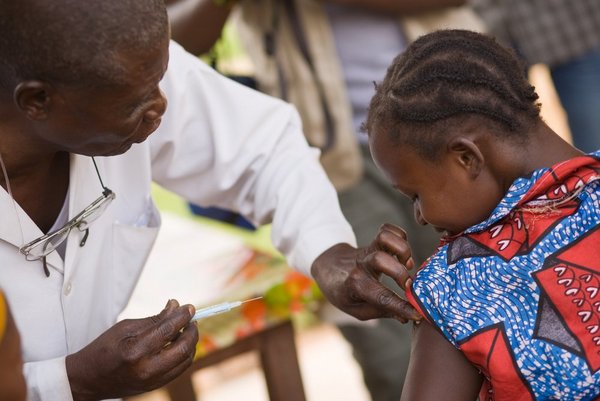 Vaccination in Democratic Republic of Congo (DRC). Uptake of routine immunisations has dropped in many vulnerable countries.
Photo: Shutterstock/Valeriya Anufriyeva

Fewer vaccinations because of COVID-19

One-off immunisation campaigns and national routine vaccine introductions delayed amid coronavirus pandemic, according to experts. Countries with ongoing conflicts and fragile health systems are most at risk.

Interruptions to vaccination programmes caused by the COVID-19 pandemic could result in new waves of measles or polio outbreaks, health experts warn, as SciDev.Net reported in late April 2020.

A growing number of one-off immunisation campaigns and national routine vaccine introductions are being delayed amid social distancing and other measures to curb the spread of SARS-CoV-2, leaving millions unprotected.

Uptake of routine immunisations has dropped in many vulnerable countries, with people unable or unwilling to travel to sessions — something that was also observed during the 2013-2016 Ebola outbreak in West Africa.

With both preventive campaigns and routine immunisations impacted, “we’ll have an increasing number of children who will become susceptible to vaccine-preventable diseases and that will definitely lead to outbreaks”, says Richard Mihigo, programme manager for immunisation and vaccines development at the World Health Organization’s Africa office.

Following the WHO’s recommendation last month that all mass vaccination campaigns should be suspended in response to COVID-19, Mihigo says mass preventive campaigns — which help to fill in the gaps in places with weak routine immunisation — had been put on hold in almost all African countries, while campaigns to target existing outbreaks are being considered on a case-by-case basis.

Those halted include preventive measles campaigns in Chad, Nigeria, Ethiopia and South Sudan, as well as in Kinshasa, the capital of the Democratic Republic of Congo (DRC). More than 6000 people died since last year in the DRC in what is currently the world’s largest measles outbreak. These campaigns alone had aimed to reach 21.2 million children under the age of five, Mihigo says.

Meanwhile Gavi, the global Vaccine Alliance, which vaccinates almost half of the world’s children, announced earlier this month that 14 major immunisation campaigns supported by the alliance had been postponed, along with four national routine vaccine introductions.

These delays, which impact campaigns against polio, measles, cholera, human papillomavirus (HPV), yellow fever and meningitis, have affected at least 13.5 million people in 13 of the world’s least-developed countries, the alliance says, cautioning that many more delays are expected. The Global Polio Eradication Initiative, which partners with Gavi and the WHO, has also recommended that all polio vaccination campaigns be paused worldwide.