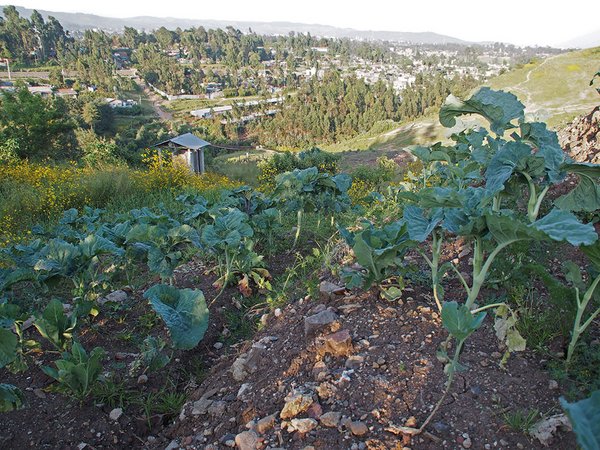 Agroecology has to become economical

Today, consumers are charged more for organic food than for conventionally produced food. But given the latter’s ecological footprint, this ought to be the other way round, our author of the Swiss Agency for Development and Cooperation maintains. To make this happen, he calls for public policies to be reformulated so that they include social and environmental costs and benefits in their food and agriculture legal frameworks.

Despite the fact that as many as 72 out of 129 developing countries have reached the hunger target of the Millennium Development Goals and the proportion of undernourished people in the developing regions has fallen by almost half since 1990, more than 800 million people still suffer from hunger, and two million from micronutrient deficiencies. A further 1.9 billion are overweight, increasingly also in the Global South. The pollution and degradation of air, soil and water as well as the loss of genetic heritage, together with the changing and increasingly unpredictable climate, threaten the foundation of food production and the livelihood of the world’s population. The present-day food system cannot provide enough healthy food for all while preserving the environment.

With an expected two thirds of the world population living in cities by 2050, food habits are going to change, and a growing number of people with low purchasing power will not be able to feed themselves decently. Also, food production will continuously shift to peri-urban and urban regions, where the pressure on available resources is growing drastically. Access to land is highly contested, and water resources are scarce and often polluted.

As José Graziano da Silva, Director General of the United Nations Food and Agriculture Organization (FAO), stated at the opening of the recent 2nd Agroecology Symposium in Rome, Italy, there is urgency “to get out of the trap of conventional, high-resource input systems with increasing productivity at any social and ecological costs, still not leading out of hunger for over 800 million people”.

Intensive use of external inputs such as chemical fertilisers and pesticides in crop production or feed concentrates for animals lead to increased yields and production. However, reduced soil fertility, water quality and (agro-)biodiversity, and in some instances, even air pollution are environmental costs often ignored. Chemical residues in food that is often highly refined and, thus, poor in nutrients, cause health costs that citizens and society have to bear. Furthermore, a food system that depends on transporting food thousands of kilometres around the globe is “not fit for the future”.

The Sustainable Development Goals towards ending hunger – without leaving anybody behind and tackling climate change and environmental protection – and the International Assessment of Agricultural Knowledge, Science and Technology for Development (IAASTD) set the frame for Swiss Development Cooperation (SDC) in its aim to support sustainable food and nutrition systems. As this report clearly states, “Business as usual is not an option!” It does not offer so-called “silver bullet” solutions but outlines in a comprehensive way the areas for action, including change in science, technology, policies, institutions, capacity development and investment.

Referring to the SDGs, the Swiss Government outlines its mandate “to help reduce global risks in the field of sustainable agriculture, food security and nutrition”. This has to include inter alia: improving access to healthy food, supporting seed systems, increasing agrobiodiversity and combating land degradation. Following the FAO, thus understanding agroecology as “the use of ecological principles for the design of agricultural systems” (see also article "A pathway to achieving the SDGs"), SDC promotes initiatives of agro-ecological agriculture and influences institutions that work towards reducing the environmental impact, such as initiatives to reduce the ecological footprint of agriculture and food systems or the conservation and sustainable use of agrobiodiversity, in particular smallholder farmers’ access to local and quality seeds. Some examples are given below.

A consortium of private and public sector partners and value chain actors for rice and cotton are promoting reduced water consumption in food production in the four countries of India, Kirgizstan, Pakistan and Tajikistan (Water Project WAPRO). Where previously the retailer would only have invested in the availability of water at field level, through public funds made available by SDC, water governance at the village level has become a main concern of the consortium. Through technical advice, made possible by the project, the farmers now apply cropping techniques that use less water in producing organic rice, which qualifies them to be paid a premium price. WAPRO also contributes to the revision of the global standards on rice production. Sharing responsibilities of different public, private and civil society actors constitutes a core concern of Agenda 2030. Through such partnerships, SDC envisions to influence transformation in how a global public good such as water is being governed.

With support from SDC, Bioversity International is promoting enhanced use of crop diversity through community managed seed banks. In Uganda, the project builds on the diversity that was available on farm to reduce the pressure of pests and diseases, and on farmers’ knowledge to develop new low-cost methods to increase common bean diversity. Common beans are primarily managed by women, therefore this project benefited not only local farmers but also women in terms of availing them with the much-needed diversity and equipping them with the capacities to grow better seeds for better yields, food and seed security. The lessons from these pilot community seed bank projects have guided the inclusion of community seed-banking in draft policies on seed and plant genetic resources of the Ugandan Government.

Responding to the Decision of the African Union (AU, 2011) on organic farming, the Ecological Organic Agriculture (EOA) Initiative has been established under the leadership of the AU Commission. Under the Initiative, which SDC and the Swedish Society for Nature Conservation are supporting, EOA is to be mainstreamed into national agricultural production systems, in public policies and investment plans, in technical standards and certification procedures, in research agendas and training curricula, in advisory and information practices and in the organisation of markets and value chains.

A transformation towards healthy food systems requires changes in the research and innovation systems in order to respond to agroecological approaches. SDC promotes scientific research on the potential of organic agriculture. The Swiss Research Institute of Organic Agriculture (FiBL), with partners in India, Bolivia, Kenya, Ghana and many other countries, and supported by SDC, has shown that organic production can be both economic and ecological if markets reflect true costs and if by-products of field and tree crops are brought into the calculations.

Prices have to reflect health and environmental costs

Smallholders will also feed a large proportion of the people world-wide in a future, highly urbanised world. Peri-urban and urban agriculture – in the proximity of the consumers – is going to play an increasing role in providing food. Therefore, improving productivity and quality of the products based on agroecological principles is crucial. However, agroecology is not solely a smallholder agriculture affair. On the contrary. Large-scale agriculture, broadly characterised by non-sustainable production methods, is challenged with the need for transformation. Upcoming digital agriculture technologies may assist in water saving production and reduced and optimally targeted application of pesticides and fertilisers. Investments – also in research – and public policies need to be reoriented. Market prices will have to reflect the health and environmental costs. On the markets today, consumers pay higher prices for healthier food. The change would mean that conventionally produced food needs to be more expensive as it damages the environment and health. To make this happen, public policies need to be reformulated in order to include social and environmental aspects (and benefits) in their food and agriculture legal frameworks.

Alice Muriuki lives as a farmer in the highly fertile Muranga Hills, in Kenia, some two hours’ drive from Nairobi. Muriuki recently switched to growing tea organically. When asked about her reasons, she mentioned the health problems that originated from the pesticides she applied. She has no marketing channels of her own and sells her tea to the local tea collection co-operative, where it is put on sale alongside conventional products. She participates in field research demonstrating the advantages of her farming practice and shares her experiences with neighbours.

Manuel Flury is Co-Head of the Global Programme Food Security (GPFS) at the Swiss Agency for Development and Cooperation (SDC) in Bern, Switzerland.
Contact: manuel.flury@eda.admin.ch