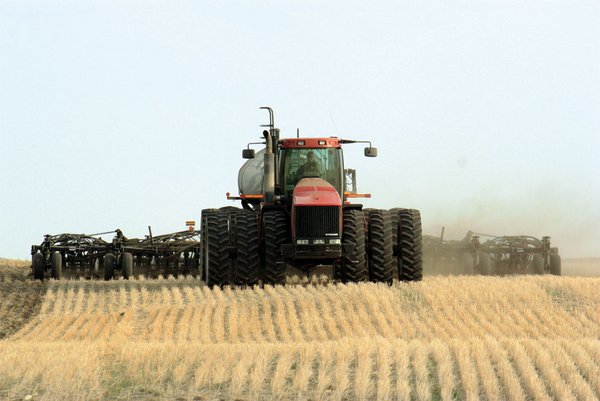 Direct sowing equipment has its price – one

What can conservation agriculture achieve?

Wind or water erosion are common phenomena on the majority of arable land. The resulting soil losses are generally higher than the rate of formation of new soil, so that the depth of fertile soil is decreasing. Moreover, eroded soil can cause severe off-site damages. One way of reducing erosion is the implementation of conservation agriculture (CA); this is a production system in which the soil is no longer ploughed.

According to the Food and Agriculture Organization of the United Nations (FAO), CA is based on three principles:

Conservation agriculture has been practised on a large scale for about 30 years. Although ploughing is still the standard, the area of land under CA increased from around 11 million hectares in 1990 to 106 million hectares in 2008/09 (source: FAO). It is estimated that CA is presently being practised on around 125 million hectares worldwide. Growth in CA has been most rapid in Latin America, especially in Brazil, Argentina and Paraguay, where CA now accounts for almost two thirds of the farmland. Other countries in which CA is prominent are the USA, Canada and Australia.

Many perceive conservation agriculture as a production system that is synonymous with monocultures, production of genetically modified organisms (GMO) and use of broad-spectrum herbicides. This is because on large areas that are cultivated without ploughing, particularly in North and South America, the other CA principles are not adhered to. This is not the proper CA as described above and should rather be called “conservation tillage”.

Provided that the three basic principles (no tillage, permanent soil cover, diverse crop rotation or intercropping) are always observed, CA is an important form of sustainable land management. It can be practised on a wide range of sites, under various socio-economic conditions and in different sizes of farming operations. Conservation agriculture has particular advantages in combating soil erosion and in improving water infiltration and storage in the soil. It is therefore a means of adapting to climate change, particularly to changing rainfall patterns.

After a conversion phase, the yield potential of conservation agriculture is just as high as, if not higher than, that of tillage farming. Since no soil tillage is needed, there is a saving of energy and capital. Production costs fall as a result, and the emission of greenhouse gases is reduced. On the other hand, at least during the conversion phase, higher production and labour costs may be incurred for weed control and for direct sowing equipment. This makes the conversion especially difficult for smallholder farmers, who often have no access to funds for inputs such as herbicides or farm equipment. Because smallholder farmers often also lack specialist knowledge, weed control poses a particular challenge for them. Furthermore, they frequently use their straw as feed for livestock, which makes it more difficult to maintain permanent soil cover. Therefore, CA is most widespread in large-scale farming operations, while it is hardly used by smallholders. The principle of maintaining a diverse crop rotation may also be difficult for farmers, if, for example, there is no market for legumes.

CA is often said to increase the carbon content in soils, so that farmers practising CA could be compensated for mitigating climate change. However, scientists are still debating the extent to which CA results in carbon enrichment in the soil, and further research is needed. More research is also needed regarding the adaptation of CA to local political, economic and social conditions and also to local environmental conditions. The question of which environmentally compatible strategies could be employed to control weeds, diseases and pests more effectively in CA also requires clarification.

In conclusion, CA is not a cure-all for the problems in agriculture. It is only one of several production systems which have their specific pros and cons. CA is particularly beneficial in areas that suffer from erosion. In order to successfully introduce CA on a larger scale and in a smallholder environment, strategies for the promotion of CA in specific regions, climates and farm types need to be developed. Since the environmental and economic advantages of conversion to CA only become apparent in the medium term, awareness raising is key to change the attitude of farmers, decision-makers, scientists, etc. towards CA. Policy development, training and access to appropriate machinery are other important preconditions. German development cooperation will continue to support these efforts.