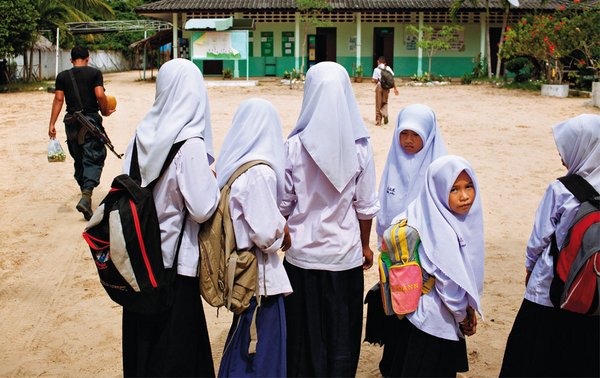 A paramilitary Ranger walks by students at Pakaluesong Elementary School, Thailand. About 30 Rangers live in a camp established in the school grounds.
Photo: © 2010 David Hogsholt/Getty Images for Human Rights Watch

In many conflicts around the world, schools are not just caught in the crossfire, they are intentionally targeted for attack. Armed groups have threatened and killed students and teachers, and burned schools. Government security forces have taken over schools for military purposes. This article suggests four ways that governments, international donors, and civil society can do more to protect education during armed conflict.

In conflict areas around the world schools, students, particularly girls, and teachers are intentionally targeted by armed groups and government security forces. Well-known are horrific attacks in Afghanistan, where men on motorbikes have sprayed pupils with gunfire and doused schoolgirls with acid to prevent them from going to school. The targeting of education in other conflicts has been less well-publicised. For example, in Somalia, the Islamist militant group al-Shabaab has turned schools into battlegrounds, using functioning school buildings and compounds to fire on opposing forces, deliberately placing students and teachers in harm’s way from often indiscriminate return fire. The group has in some cases bombed school buildings, killing students, teachers and bystanders. And the group has used schools to recruit students as fighters and to abduct girls and young women for rape and forced marriage.

Al-Shabaab have also imposed their harsh interpretation of Islam on schools in areas that they control, prohibiting English, the sciences and other subjects deemed improper, and enforcing severe restrictions on girls’ dress and interactions with male students. They have threatened and even killed teachers who resist their methods.

What are the reasons  of attacks?

World-wide, more than 40 percent of the 67 million primary-school-age children out of school live in conflict-affected countries, according to UNESCO. Between 2006 and 2011, schools were attacked or used for military purposes in Afghanistan, Burma, the Central African Republic, Chad, Colombia, Cote d’Ivoire, the Democratic Republic of Congo (DRC), Georgia, India, Iraq, Israel and the Occupied Palestinian Territories, Libya, Nepal, Pakistan, the Philippines, Somalia, South Sudan, Sudan, Syria, Thailand and Yemen.

Motives vary. Rebel groups may see schools and teachers as symbols of the state, high-visibility “soft” targets that they can use to garner media attention and undermine confidence in government control. Some groups oppose the content of curriculum, for example secular or “Western” material, or who is being educated, for example girls. Groups may seek out schools to indoctrinate children, recruit them, or abduct them for sex or forced marriage. Some attacks are non-ideological, relating to local disputes or criminal elements seeking to drive out authority. Government security forces and non-state armed groups are often attracted by the location, solid structure, and ready facilities found in schools, and use them for military bases, shelters, weapons caches and outposts.

Regardless of the reason, attacks are deeply damaging. Students and teachers may be traumatised, injured, or killed. Attacks often result in dramatic decreases in attendance, particularly among girls. Buildings and teaching materials may be damaged or destroyed. Classes may be suspended for days or even months; in the worst cases hundreds of schools may be closed. Attacks can also have a ripple effect on schools in surrounding areas, driving out or slowing down NGOs and other non-governmental education service providers.

Education is universally recognised as essential for individual intellectual and social development, and during situations of conflict, education can be both life-saving and life sustaining. When the school environment is safe, it can give children a sense of normalcy in an otherwise unstable situation. Schools can provide life-saving information and services, such as landmine-awareness. Education is also central to the realisation of other human rights, such as freedom of expression, association, and assembly; full participation in community life; and freedom from discrimination, sexual exploitation, and the worst forms of child labour. Indeed, the exercise of these rights may help countries overcome and recover from conflict. Educating girls carries particular benefit for a country’s overall development, from reducing maternal and infant mortality to promoting economic growth.

But even in contexts where attacks on education are recognised as a tactic of the conflict, governments and outside actors may overlook the nexus between security and education, instead focusing only on military strategies. This is especially true in fragile and conflict-affected states where the government is not carrying out its basic role, including core functions such as providing education. In these instances, the response falls on others, and the support of international donors is especially critical.

How to protect education during armed conflicts?

Without downplaying the importance of addressing security concerns – indeed, basic security is needed for children and teachers to travel to and study safely in schools – all political actors should consider the crucial relationship between security, state fragility and education.

“Abdi S.” describes what happened at his school in Somalia in mid-2010: “Al-Shabaab came into the compound of the school and told us to stay in class. It was noon and they set up [a surface to air rocket launcher] and they started launching from inside the school compound. They set it up in the ‘playing’ area…. Some students tried to get out of the compound but they were turned back by al-Shabaab. We were trapped for two hours ... There was incoming fire coming back at our direction. There were five rockets hitting around the school compound. One landed as we were released and it killed eight students.”

Recognising that targeted attacks on schools, teachers, and students are often present in conflicts around the globe, governments, international donors and civil society should thus ensure better protection for education in conflict in four areas:

All levels of education, including secondary and university education, also for girls, should be considered. First, timely and accurate monitoring and reporting on attacks on education is crucial for responding to attacks, for holding perpetrators accountable, and for seeking to prevent attacks from occurring in the first place. Yet reliable, first-hand information may be difficult to collect as areas most vulnerable to attacks may be the least accessible because of poor security and infrastructure. Those with the greatest access to information or responsibility to monitor may lack skills, resources or motivation to monitor, or may face serious security threats to their own safety or that of witnesses. Reporting systems may be weak or non-existent or not linked to effective responses.

Governments, and relevant UN bodies, NGOs and others all should monitor, report and respond to attacks on education. For example, the UN-led Monitoring and Reporting Mechanism on Children and Armed Conflict (MRM), currently present in 15 countries, has an explicit mandate to monitor attacks on schools, teachers, and students, as well as military use of schools. Based on this information, the UN Security Council can take strong action against parties that attack education.

Access to education should also be considered a non-military indicator of security: if an area is too unsafe for students and teachers to go to school, the area should not be considered secure. Using access to education is a practical benchmark in that it is often the most common point of interaction between individuals and their government and data are concrete, measurable, and outcome-focused.

Second, education service providers, including NGOs, UN agencies, and governments, supported by international donors, can develop more targeted programming to prevent and respond to attacks. Possible areas of focus include early warning systems, physical protection of schools, community involvement, alternative delivery and negotiations with armed groups, among others. A joint NGO and UN coalition, the Global Coalition to Protect Education from Attack (GCPEA), has begun to collect information about diverse strategies that are being tried in the field, but more research is needed on what works in what contexts, and why.

Third, governments should strengthen legal protections for schools. This is important not only for countries currently in conflict but also for those who wish to show leadership and build up good state practice.  International humanitarian law (“the laws of war”) prohibits attacks on schools and other education structures that are not being used for military purposes. However, many states in their criminal law afford no special protections to schools beyond those generally given to civilian property, which typically do not take into account the larger impact of destroying or damaging a school. This lapse includes the majority of the 116 states party to the Rome Statute, the international treaty establishing the International Criminal Court, which provides that international attacks on buildings dedicated to education are a war crime. Governments should make explicit in their criminal and military laws that intentional attacks on school buildings not being used for military purposes during an armed conflict are war crimes.

A teacher from Afghanistan: “I was sleeping and I was woken up by the noise. We went out and saw the building of the girls’ school was destroyed, the roof came down, the door was burned ...There were a lot of flames and smoke. I was a little bit scared when I saw that! It might have been a remote-control mine .... For one week after that just a few girls came and then we encouraged them to come. But there were some who never came back at all ... I have a girl relative who went to that school. Although we were worried about her, we didn’t forbid her to go because it’s her future, but I still feel worried. I feel there is a security problem. But now we are watchmen – we made a schedule and each person has one night.”

Additionally, the use of education institutions by militaries and armed groups during situations of conflict and insecurity can disrupt or completely deny education in both the immediate and long term. Only seven countries currently prohibit or explicitly restrict the use of education buildings by their armed forces, according to a recent survey of 56 countries by Human Rights Watch. However, this small number includes India, the Philippines, and Colombia, all states involved in prolonged internal armed conflict, demonstrating a belief that such use is not necessary for successful fighting. Governments should prohibit armed forces’ use of schools. NGOs should advocate for these protections, and donor governments should promote them.

Finally, accountability for those who attack schools, teachers, and students is critical, using information collected through effective monitoring and protections in criminal law. Where local laws and justice systems are not functional, however, civil society may need to resort to more informal methods of accountability, including through public stigma (increasing the price of attacks in the court of public opinion). The International Criminal Court also has jurisdiction over wartime attacks on buildings dedicated to education, although no one has yet been charged under this provision and the court can try only a very few cases. Other governments may help through travel bans, financial freezes and other forms of pressure. UN bodies, from the Committee on the Rights of the Child to the UN Security Council, can also increase the perceived “price” of attacks.

There is growing recognition among donor governments, UN agencies and non-governmental organisations that more needs to be done to protect schools, teachers and students from targeted attack in conflict. These areas – monitoring and reporting, programmatic response, legal protection and accountability – provide fertile ground for action.