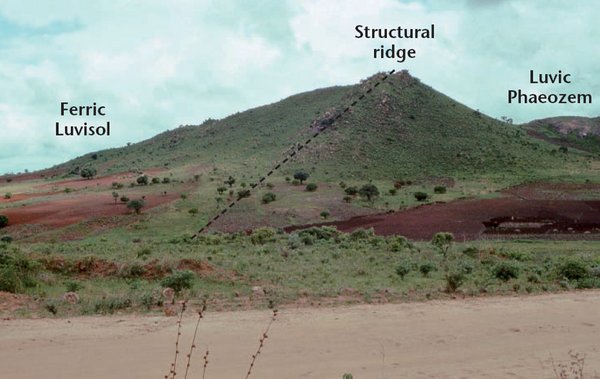 In the middle a tilted structural ridge with on the left a red soil with modest levels of organic matter (Ferric Luvisol) and on the right a brown soil very high in organic matter (Luvic Phaeozem)
Photo: R. Voortman

Why the Green Revolution failed in sub-Saharan Africa

Crop yield improvement is dearly needed in sub-Saharan Africa, but remarkably, African farmers do not adopt the available ‘Green Revolution’ fertiliser technologies. This has many reasons, a crucial one being soil properties.

The problems of poverty and malnutrition in sub-Saharan Africa (SSA) are well-known. Over the last five decennia, per capita food production has even decreased. The SSA food system is further threatened by rapid population growth, wide-spread soil erosion and agricultural practices of ‘nutrient mining’, leading to increasingly impoverished soils. It is further reasonable to assume that area expansion will take place on increasingly marginal soils. The single quick-fix solution to all these problems and threats, so it would seem, is the application of ‘Green Revolution’ technologies that are based on improved crop varieties in combination with ample supplies of irrigation water, inorganic fertilisers and pesticides. Since the 1960’s, these have dramatically increased crop yields in South and East Asia. Such technologies never took root in SSA, and fertiliser use per hectare remains negligible at less than 10 kg. The question we try to answer here is why African farmers are reluctant to use fertilisers.

A common narrative on the underlying causes for the failure of the Green Revolution in SSA is the lack of irrigation facilities and that rainfall is very unreliable, while soil fertility is also very low: ‘the unlucky fate of Africa ’. But there may be many other reasons why African farmers do not adopt fertilisers: lack of agro-dealer networks, lack of credit, lack of collateral, high fertiliser prices while farmers are cash constrained, and, indeed, possibly, the promoted technologies are not appropriate under the environmental conditions of Africa. Below, these issues are discussed with a production ecology perspective because, as will be shown, problems in this sense have primacy in being solved.

Irrigation potential, to begin with, is very modest in Africa, simply because, unlike Asia, it lacks extensive tracts of flat alluvial deposits under easy command of large rivers. Hence, the future agriculture of Africa will have to achieve most of its production increases under rainfed conditions. Unlike the common narrative, the rainfed climatic yield potential for grains is in the order of 7–10 tons/ha in large parts of the savanna and highland zones, where most rural Africans live. These potentials are lower only in wet areas such as the Congo basin and the drier zones around the Sahara and Kalahari, and in the Horn of Africa. It has been established that even in the Sahel, soil moisture is less restrictive for plant growth than soil nutrient content. Obviously, this holds a fortiori under wetter conditions such as in the savanna and highland zones. The climatic yield potentials imply that 3- to 4-fold yield increases can be achieved in large parts of Africa, provided that appropriate fertiliser technologies are applied.

With respect to soils and soil fertility, the prevailing image is one of vast expanses of uniform acid red and old soils that are leached of nutrients and consequently very unfertile, that suffer from aluminium toxicity and that fix the phosphorus that is applied as fertiliser. In the booklet ‘Myths and science of soils in the tropics’, a group of authoritative scholars show that in many ways, this is a gross simplification. Soils in the tropics are spatially as variable as in temperate zones. Soils with the combination of all mentioned undesirable properties do occur in Africa, but mainly in the rainforest zone. Elsewhere, soils mostly lack these properties. Moreover, naturally, the best soils have often been selected for putting into use. Thus from the production ecological perspective, African soils do not share common soil chemical properties that would make fertilisers ineffective.

Yet, African soils seem to behave unruly. Most African countries have ‘blanket’, pan-territorial, fertiliser recommendations similar to those of Asia: high doses, and mostly containing N and P only. It has been shown that a large portion of farmers applying these technologies do not recover the cost. Agronomic research also mostly tests high dose technologies with this restricted selection of essential plant nutrients. The results are very variable: sometimes, appreciable yield improvement is achieved, often the yield increase is very modest, and unexpectedly frequent yields even decline. Also, in a considerable number of cases, the application of N and P together has no greater effect on yield than either N or P separately. Other observations show that yields do not further increase, or even decline, above doses as low as 20 kg. On theoretical grounds, these phenomena must be taken as a sign that, rather than N and P, other essential nutrients are the most limiting, or that at low doses of N or P other nutrients soon become most limiting. Research on other essential plant nutrients is very rare, but does show that Ca, Mg, K and S can be effective and small doses of micronutrients can also increase crop yield considerably. In any case, the yield increase per kilo nutrient with high-dose N-P applications is frequently low to the extent that it is quite rational for farmers not to adopt such technologies.

Apparently African soils are different from those of the Green Revolution of Asia. In this context, it is important to observe that the largest yield increases in Asia have been achieved mainly on volcanic soils and in alluvial valleys. Most volcanic soils are inherently rich, including in micronutrients. River plains are also often fertile and, because the deposits consist of a mixture of material of a different geologic origin, here too, the chances of micronutrient deficiencies are less. This is the reason why simple fertiliser technologies, consisting of macronutrients N and P only, could be so successful. The African cultivated soils are of a different origin and have developed from crystalline bedrock. The soil chemistry therefore reflects the mineral composition of its parent material. Consequently, the chances of an unbalanced chemical composition are great and, beyond N and P, may refer to any of the essential plant nutrients.  Moreover, due to geological phenomena of rock formation, such as uplift, tilting, folding and faulting, the parent rock is very variable in space, even within short distances. Thus, African soils are locally homogeneous and spatially variable and, hence, at short distances, entirely different fine-tuned and site-specific fertiliser compositions and doses may be required to achieve the agro-climatic yield potentials.

Furthermore, fertilisers are expensive in Africa, which implies that to ensure profitability of its use, the applied fertiliser must have very large yield impacts, much larger than in Europe. Appropriate fertilisers then preferably contain only the most limiting nutrient(s). Moreover, low doses should be preferred, so as to avoid decreasing marginal returns, but also to fit the small purse of African farmers. As such, high fertiliser costs further underscore the issues of fine-tuning and site-specificity.

In sum, in African rainfed agriculture, the weather may impact on crop yields, just as anywhere else, but these effects will be dwarfed by the potential of appropriate fertiliser technologies that raise yields close to agro-climatic yield potentials. A Green Revolution is possible, but fine-tuning and site-specificity, while considering the entire spectrum of essential nutrients, is knowledge intensive. The hitherto literally trial and error approach has to be curbed to an approach whereby yield response to added nutrients is related to the nutrient content in the soil. In doing so, we may develop the unifying principles on the ‘chemistry’ between soils, plants and fertilisers that within a coherent analytical framework will allow the quick development of appropriate fertiliser technologies for SSA.