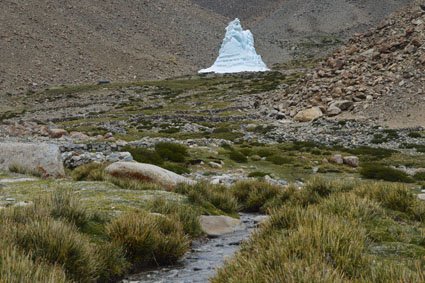 When farmers create glaciers for their farms

As glaciers way up in the mountains start supplying melt-water annually from July to early September, when the summer heat is at its peak, farmers in Ladakh Himalayas have traditionally struggled for enough supplies of water for irrigating their crops in the beginning of the farming season. Creating artificial glaciers could solve their problem.

Ladakh, some 1,250 km north-west of India’s capital, New Delhi, is a high-altitude desert in the western Himalayas, 4,450 metres above sea level. Blessed with a stunning landscape, the region is a hugely popular tourist destination. Adding to farmers’ worries, less snowfall and irregular ice-melting has become an almost permanent feature in the region in recent years, making the availability of water early in the season even more challenging. At best, average annual precipitation in Ladakh is four inches.

The Indus River, which originates in south-western Tibet and passes through Ladakh before meandering into neighbouring Pakistan, flows way below the farmlands of the district of Leh – too far below for the farmers to rely on its water. But thanks to Chewant Norphel’s pioneering work in 1990s, Ladakhi farmers in some villages have been able to adapt to this climatic and geographical disadvantage in recent years.

Norphel, a retired civil engineer who is now 84, cracked a solution to farmers’ water woes in Ladakh years before world leaders assembled in Kyoto in 1997 to put in place the first treaty to address climate change. He pioneered the art of making large glaciers near villages using the shades of large mountains.

Since 2014, Norphel’s innovation has been further modified by Sonam Wangchuk, another engineer from the region who has been successfully creating ice stupas from early winter for the past five years. Considered as highly sacred by Buddhists, stupas dot the landscape of Buddhist-dominated Leh almost everywhere near habitations. According to Nordan Otzer, a local writer, the round loam structures signify special qualities of Lord Buddha’s life and house important Buddhist scriptures. “They are built everywhere so that people get a sense of spirituality and get reminded of their responsibilities whenever they see them,” Otzer said.

This is why Wangchuk thought of shaping his artificial ice towers like stupas. They are both a visual delight and are spiritually quite relevant to people. “Creating the ice stupas is an effort to help the farmers getting water when they need it the most,” Wangchuk said, stressing that farmers in Ladakh face acute water shortages during the early crop-growing period between April and May. “We are also exploring ice climbing, ice skating, ice hockey and ice sculpture of the stupas in order to develop a new form of winter tourism in Ladakh,” he added.

Wangchuk says he was inspired by the artificial glaciers or ice-fields created by Chewant Norphel. His innovation has earned him accolades both within India and globally. He was among the five people from across the globe who bagged the Rolex Award for Enterprise in November 2016.

A low-cost solution which brings hope to farmers

The ice stupas – huge ice towers with heights ranging from 15 to 50 metres and standing very close to villages –  are formed using glacial stream water carried down from higher ground through buried plastic pipes whose final section rises vertically. “Due to the difference in height (i.e. gravity), pressure builds up in the pipe and the water passes along the pipe, flows up and out from its raised tip through a fountain into sub-zero air and then freezes as it falls to gradually form an ice cone or stupa,” Wangchuk explains. In late spring, the melt-water is collected in large tanks and then fed onto planted land using a drip-irrigation system.  According to Wangchuk, this is a solution that needs very little effort and investment (up  to 1,030 US dollars) and can be created for all the villages which need water for agriculture and other uses in early summer.

One of these villages is Shara. The creation of an ice stupa in the last winter raised the hopes of farmer Tsering Motup. “I want to be a role model for the farmers of my region in organic farming. But, availability of water at crucial times is a must for me to become a successful organic farmer,” Motup told the author in an interview in June 2019. “Nevertheless, just one single ice stupa is not enough to address our water woes,” he noted.

The artificial glacier near the edge of the mountain over his village just provided a trickle as the weather in Ladakh remained unexpectedly cold even in the month of June.  “If there were at least two or three ice stupas, a trickle from each of them would suffice for our needs,” the ambitious farmer said.

Motup presently has five acres of land from which he is growing organic vegetables and barley in just half an acre. “Whatever produce I get from my organic farm doesn’t fetch me extra money as of now,” he explains. “But once I get the certificate of an organic farmer, I will be able to make four times more money against my organic products.” Motup is waiting for the day when his village has the annual services of several ice stupas to ensure enough water supply for irrigation in late spring and early summer, when glacial-melt from natural glaciers is not available.

This also holds for the farmers of Ganglas, a village which is just eight kilometers north of Leh.  The ice stupa, made for the first time in their village last winter, is providing some water, “but just one glacier is not enough”, the villagers say.

Rigzin Mingyur, the team leader at Wangchuk’s Ice Stupa project in Leh, explained that they certainly had plans to create more of these artificial glaciers in future depending on the number a particular village needed. “Since we have experimented the creation and utility of ice stupas, we now want volunteers to create these stupas in their villages,” Mingyur said.

Last winter, expression of interest for making ice stupas was sought from villagers to which over 20 groups from different villages responded. “After interviews, twelve volunteer groups were given training and allotted all the required infrastructure based on their estimates for making ice stupas in their villages,” Mingyur said, adding that the first three position-holders had been given prizes as well.

The top prize was won by ten volunteers of Shara village, as they had made an ice-stupa measuring 33.5 m in height and with an estimated capacity of seven million litres. The first position fetched them a prize of half a million Indian rupees (USD 7,352). Villagers in Shara said that the volunteers from their village had also earned money by selling refreshments at the ice stupa site as tourists had kept coming to see the ice stupa for about three months after its completion.

Sonam Wangchuk at the Rolex Award for Enterprises website