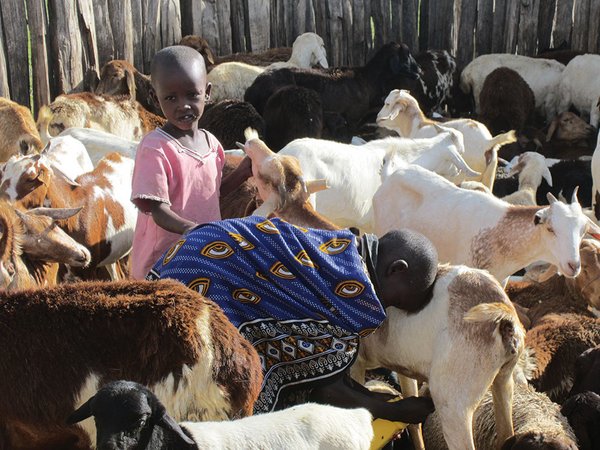 In many African societies, children have their own agricultural tasks, as herding livestock.
Photo: R. Birner

What is so special about family farms?

Family farms are especially well suited to meet the challenges of labour organisation in agriculture. In early stages of development, they play a particularly important role in creating productive employment for the major share of the population. Moreover, they have strong incentives to use their resources sustainably so as to pass them on to future generations. Yet, family farms should not be romanticised. Often, they only survive by working longer hours and accepting lower incomes than people employed in other sectors of the economy.

Farming requires three main factors of production: land, labour and capital. We can distinguish different organisational forms of agricultural production according to the question: Who owns the land and the capital, and who supplies the labour? The most important feature of the family farm is the family organisation of labour. According to the definition presented by FAO Director-General Graziano da Silva (see article "Family farms are key to feeding the world"), a family farm is “managed and operated by a family and predominantly reliant on family labour, including that of both women and men”. Family farms do not necessarily own the land that they cultivate. They may rent it under different land tenure arrangements. In developing countries, family farms are often operated under share cropping arrangements, where they have to give a share of the farm output to the land owner. In early stages of development, family farm capital is limited, consisting mostly of animals and agricultural tools. In industrialised societies, family farms typically operate with high capital inputs in form of machinery and buildings and own these capital assets, even though they rely on bank financing to acquire them.

Socio-cultural factors play an important role for family farms. They influence the gender division of labour, i.e. the rules on what activities are carried out by male vs. female family members. While taking care of the children and house-keeping are almost universally the tasks of women, the rules for agricultural activities differ widely across societies. In many African societies, women cultivate their own fields. In other parts of the world, women carry out specific tasks on jointly cultivated fields, such as transplanting rice or weeding, while male family members are in charge of other activities, such as ploughing. Children often have specific agricultural tasks, as well, such as herding livestock, which may interfere with school attendance. Socio-cultural factors also influence how land is bestowed to the children. In some societies, land is equally distributed among the children, while in others, only one child inherits the farm. In many developing societies, women are only able to access it through male family members.

The prospect of passing on the farm to the next generation also creates incentives to keep the farm in good condition, e.g. by investing in soil fertility. However, this does not imply that family farms are always managed sustainably. Among poor family farms, sustainable natural resource management is often hampered by the high labour demand for techniques such as establishing contour bounds and using manure, and by a lack of access to inputs such as inorganic fertiliser.

A look at other types of agricultural production

Family farms can also be distinguished from farm enterprises that mainly use hired labour. These operations may still be owned and managed by a family. In this case, it is ultimately a matter of definition to decide what percentage of the farm labour has to be supplied by family members to still classify the operation as a family farm. One well-known historical example of large-scale owner-managed farms that use mostly hired labour is the “Junker” estate in Prussia. Similar types of farm organisations were also established under colonialism in a range of developing countries, e.g. in Southern Africa. These farms are typically characterised by relatively high levels of productivity.

Another organisational type to be distinguished from the family farm and from the owner-managed farm using hired labour ist the corporation which uses both hired labour and hired management and relies on various forms of capital and land ownership. In the case of state farms, land and capital are owned by the state, and they are managed by state agencies. They were also common in former socialist and communist countries, and have suffered from similar problems as the producer co-operatives. Some countries in sub-Saharan Africa promoted large-scale mechanised farming on state farms, for example, in Sudan, Tanzania and Nigeria. These operations turned out not to be profitable. Companies with private capital and land ownership, which may take the form of joint stock companies, limited liability companies or other types of corporations, are a more successful type. In developing countries, this kind of agricultural organisation has been prevalent in the plantation sector since colonial times. In some of former socialist and communist countries, large-scale private holdings cultivating up to hundreds of thousands of hectares emerged during the transformation process, e.g. in Russia.

In developing countries, large-scale corporations have come to play an increasing role in recent years due to the large-scale acquisition of land, especially in sub-Saharan Africa. Such “land grabbing” by large-scale farms has led to the involuntary displacement of family farms from their land. Several international initiatives, e.g. by the Committee on World Food Security (CFS), are addressing this challenge.

Although family farms are not the only way to organise agricultural production, they are by far the most widespread type, both in the developing and in the industrialised world. And family farms prevail in all industrialised societies where they have not been abolished for ideological reasons, as in the former socialist and communist countries. This indicates that, except for special cases such as plantation crops, family farms have a comparative advantage vis-à-vis other forms of agricultural organisation. Why this is the case has been debated for a long time. In 1899, Karl Kautsky published a famous book entitled “The Agrarian Question”, in which he argued that family farms survive in the course of industrialisation because they are able to work longer hours and accept a lower income than farms that rely on hired labour. This ability of “overwork” and “underconsumption” is indeed a characteristic of the family farm, and it has ambiguous effects. Obviously, it has problematic implications for the working and living conditions of farm families. Yet, as family farms do not have to reach a return to labour and capital comparable to that of other sectors of the economy, family farms are able to secure the livelihoods of a large share of the population in early stages of economic development, where other employment opportunities are lacking. In this situation, family farms are only partly integrated into markets. A large share of them focus on subsistence production.

With economic development, the market integration of family farms expands. They sell an increasing share of their outputs, and operate with purchased inputs, often through service co-operatives. The term “commercial farms” is used for farms that are integrated into markets, but as long as it is the family that manages the farm and provides the major share of the farm labour, such commercial farms are still family farms.

In the course of industrialisation, the number of family farms declines as labour is increasingly absorbed by the non-agricultural sector. Mechanisation allows the remaining family farms to increase the area of land that they can cultivate with their family labour. Therefore, family farms can be rather large in industrialised countries, especially if population density is low, as in the USA or Australia. In the more densely populated industrialised countries of Western Europe, where land is scarce, family farms engage in mixed farming or specialise in livestock production to earn a sufficient return to their family labour, or they switch to part-time farming.

While Kautsky’s theory remains relevant to understand the nature of the family farm, a more recent branch of the economic literature called “New Institutional Economics” has identified another important reason for the comparative advantage of the family farm vis-à-vis other types of organisation: its ability to provide strong incentives for its members in a sector where the quality of work is inherently difficult to control. Farm work is difficult to supervise because it is dispersed in space, unlike industrialised work that can be concentrated within a factory. Moreover, it is not easy to assess, since outcome depends on many factors besides the worker’s effort, such as weather conditions. In addition, many farm activities, such as milking cows, require diligence and care and cannot be standardised in the same way as industrial activities. This contributes to the difficulties in supervising hired labour. Family farms are especially well suited for such types of work as they can rely on familial obligations and the prospect of inheriting the farm to motivate their members to work hard and apply the required diligence.

Since family farms occupy the largest share of the population in low-income countries, far-reaching development effects can be achieved if agricultural policies aim at improving their income opportunities, most notably through an increase in productivity. In fact, there is virtually no example of mass poverty reduction in modern history that did not start with sharp increases in productivity among small family farms. However, to reach this goal, family farms need a conducive policy environment. Investment in agricultural research, extension and education is particularly important in increasing family farm productivity. To enable family farms to access markets, public investment in infrastructure, such as rural roads, is essential. To what extent family farms require subsidies has remained to be one of the most contested questions in the current development policy debate. Subsidies often benefit the better-off and politically well-connected family farms more than the needy ones. Yet, past experience shows that subsidies can play an important role in introducing new technologies and in kick-starting markets. As already mentioned, family farms also benefit from the opportunity to form service co-operatives and to act collectively when accessing input and output markets. Family farms can increase their income through contract farming with agribusiness enterprises as well, but such arrangements need a conducive policy framework, too. Last but not least, family farms benefit from a political environment that allows them to form farmers’ associations and develop political voice. This is essential to overcome the widespread political bias against agriculture in development policy, and to use family farms as an engine of poverty reduction, economic growth and prosperity.

Birner, R. (1999). The Role of Livestock in Agricultural Development - Theoretical Approaches and Their Application in the Case of Sri Lanka. Aldershot: Ashgate.

Schmitt, G. (1991). Why Is the Agriculture of Advanced Western Economies Still Organized by Family Farms? Will This Continue to Be So in the Future? European Review of Agricultural Economics, 18, 443–458.