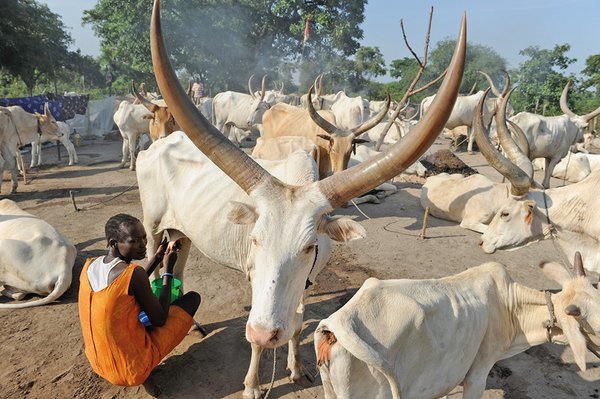 Greenhouse gas emissions from ruminant livestock vary considerably depending on production conditions. In sub-Saharan Africa, for example, levels of emissions per kg of edible milk protein are several times higher than in Europe or North America.
Photo: J. Boethling

What is needed for reducing the greenhouse gas footprint?

Livestock production is responsible for a large amount of greenhouse gas (GHG) emissions. However, numerous approaches have been developed to reduce these emissions and thus lower environmental pollution caused by livestock husbandry. This article shows where interventions are possible and which hurdles have to be cleared in implementing the various measures needed.

Increasing consumption of livestock products due to changes in people’s diet and greater food demand of a growing world population has been highlighted by the scientific community and public media as a major threat to the global climate system as well as other aspects of the global environment, specifically land degradation, water pollution and biodiversity loss (FAO, 2006). Increasing greenhouse gas (GHG) concentrations in the atmosphere (particularly carbon dioxide – CO2, methane – CH4 and nitrous oxide – N2O) are driving global climate change (IPCC, 2013). Enteric fermentation during feed digestion by ruminants is a major source of atmospheric CH4 (see Figure on page 33). Moreover, CH4 and N2O are released following excretion of faeces and urine e.g. on pastures, as well as during storage and application to agriculture land. In total, it is estimated that livestock-related GHG emissions, defined as the “sum of emissions from enteric fermentation and manure emissions, plus emissions from cropland for feed cultivation”, represent over 80 per cent of total agriculture emissions or 12 per cent of total global anthropogenic emissions (Tubielle et al., 2013).

Dairy and beef cattle in the more developed regions (Europe incl. Russia, Oceania and North America) comprise approximately 18 per cent of the global cattle stocks; thus about the same number of cattle that can be found under totally different production and climatic conditions in sub-Saharan Africa (SSA). Production conditions differ largely across these regions and climate zones (Herrero et al., 2013), and with them the livestock management practices and the availability and nutritional quality of feedstocks. These differences result in markedly different GHG emissions from ruminant livestock. For example, while emissions per kg of edible milk protein range from 10 to 20 kg CO2 equivalents in Europe or North America, respective emissions in SSA are in excess of 100 kg CO2 equivalents per kg edible milk protein, approximately one order of magnitude higher. Major reasons for this discrepancy in the GHG emission intensity between more developed and developing regions are generally related to differences in feed intake, diet composition and nutritional quality of feeds, as well as animal species and breeds (i.e. genetic potential, adaptive capacity, etc.), although differences in reproductive rates, health and mortality and overall herd and farm management may also contribute. Besides, handling of animal wastes and its use for crop and feed production may be less sophisticated in developing than in developed regions, resulting in higher nutrient losses and GHG emissions.

Hundreds of peer-reviewed publications on feeding strategies to mitigate CH4 emissions from enteric fermentation in ruminant production have been published during the last decades, including several extensive review papers (Hristov et al., 2013). Diet additives such as plant secondary compounds (e.g. tannins, ethereal oils), electron receptors (e.g. fumarate), ionophores (e.g. monensin) or dietary lipids with high proportions of unsaturated fatty acids were frequently shown to reduce enteric CH4 production. However, effects, if expressed in CH4 per unit of digestible feed intake, are relatively small, and doubts exist whether they persist in the long term and are transferable to on farm and different production situations (Knapp et al., 2014). Moreover, these additives are partly toxic or prohibited in animal feeding and are likely to be unavailable or too costly for (smallholder) farmers, particularly in rural regions of the world. Methane production during enteric fermentation is essential to reduce hydrogen load in the rumen and thereby maintain its functioning. Above-mentioned rumen modifiers therefore may interfere with feed digestion and thus hamper animal health and performance (Knapp et al., 2014). Hence, any strategies to increase feed use efficiency (i.e. product yield per unit of feed intake) in ruminant production, such as tactical supplementation of high-quality feeds or the processing of forages to improve their digestibility, are considered the most effective and promising mitigation measures to reduce methane emission intensity.

In terms of N (nitrogen) emissions, efficiency of N use by ruminants is very low. Even in high-yielding dairy cows, only about 25 per cent of the ingested N is converted into milk protein. Efficiency values range from 15 to 40 per cent (Calsamiglia et al., 2010), showing that there is a great potential to reduce N2O emission intensity through feeding and management optimisation compared to CH4 without impairing gastrointestinal tract health and functioning. For instance, adjusting N intake to actual requirements of rumen microbes and the host animal, while taking into account rumen microbial protein synthesis and N recycling via the rumino-hepatic cycle, can considerably reduce N losses from ruminant systems (Dijkstra et al., 2013). Besides, feeding and feed management strategies, such as feed processing technologies, the use of secondary plant compounds to protect feed protein from microbial degradation or the synchronisation of N and energy supply to rumen microbes, may greatly increase duodenal protein flow and reduce ruminal ammonia absorption and, consequently, N excretion via urine. These measures will thereby enhance N use efficiency at individual animal level while modifying excreta composition and reducing N emissions from animal manures.

A holistic approach is needed

Reducing the GHG footprint requires an examination of the entire livestock production system; from feed cultivation to the animals themselves (see above) and to management of the excreta. This will require a holistic approach to reduce losses from the system. For example, monogastric species are sometimes promoted as a climate mitigation strategy because they are more efficient and produce less GHG emissions than ruminants. However, the additional environmental costs associated with the higher quality feeds required by monogastrics and the direct competition with humans for edible plant biomass should also be accounted for (Gill et al., 2010).
For feed production, much of the GHG emissions is related to N fertiliser applications to the soils. However, effective fertiliser management (i.e. altering the type of fertiliser, timing of application, matching applications to crop requirements, etc.) can reduce these emissions. This may also entail re-using livestock waste where applicable, although care must be taken since in some soils (particularly those with low C content) adding manure as a fertiliser may increase soil N2O emissions relative to synthetic N fertiliser applications (Velthof et al., 2003).

With the exception of grazing systems where the animals excrete directly onto the pasture, livestock production generally requires some form of manure management (e.g. storage and removal/application to land), which provides further risk of nutrient loss and GHG emissions. Simple storage methods such as compacting and covering solid excreta can reduce N2O emissions by up to 90 per cent as well as NH3 emissions (that can then cause offsite GHG emissions) by up to 30 per cent (Chadwick, 2005), while reducing the surface area:volume ratio of the slurry storage pits or capping the pits will also reduce emissions. Further, manure can be used as an energy source through its use in biogas plants and the controlled conversion to CH4, although care must be taken to ensure that no leakages occur as this may even increase total GHG emissions (Bruun et al., 2014). Finally, the manure (or slurry from the biogas plant) can be used as fertiliser, reducing the need for external inputs (e.g. synthetic fertilisers that require energy during production) while potentially lowering leaching and gaseous losses compared to mineral fertilisers. However, prior treatment (e.g. digestion, filtration etc.) and an appropriate application method (injection or incorporation or trailing hose) should be used to reduce gaseous N losses, although technologies that reduce NH3 emissions often increase N2O emissions and vice versa (Petersen et al., 2011).

Research needs: focusing on the South

Generally, research on the environmental impact of livestock production systems has been focused nearly exclusively on production systems in developed countries. However, more than three quarters of global livestock is kept in so-called developing countries, making it obvious that significant mitigation of GHG emissions from livestock systems requires much more knowledge about such systems as the basis for the development of region-specific mitigation strategies.

Reducing GHG emissions from livestock in developing regions will require a sustainable intensification of current livestock systems. For this, complementary feeding, and herd and manure management schemes that enhance animal productivity while minimising environmental impacts from livestock for a broad range of diverse production conditions need to be investigated.
In view of the diversity of feeding situations world-wide, much research is still needed on feed protein evaluation and the efficiency of microbial protein synthesis to be able to minimise dietary protein supply without compromising animal performance.
Livestock production systems are often detached from crop production systems in terms of nutrient cycling and recovery. Regional scale options to better link livestock and crop production need to be explored, which would not only benefit the productivity of overall systems but also tighten nutrient cycles and thereby reduce GHG emissions.

Adoptability of such feeding or management strategies for crop and livestock producers must be explored for different production systems. Also, system analyses that consider interactions of different strategies at larger temporal and regional scales are needed. These analyses should consider all functions and deliverables of livestock within farming systems and not just the amount of edible products produced (e.g. draught power, financial security, etc.), which for smallholder farms, may be of similar or even higher importance than crop, meat or milk yields themselves.

Due to a lack of measurement and information, the magnitude and spatial distribution of livestock GHG emissions are highly uncertain. In SSA for example, no in situ data on ruminant CH4 emissions are available, nor is there any information summarising feeding practices, seasonal changes in nutritional quality and availability of feeds for most of the livestock systems. Lack of information hampers developing countries in including livestock systems in emission-trading schemes or in improving their national GHG inventories by using country-specific emission factors (e.g. Tier II instead of Tier I method of the International Panel on Climate Change).

Livestock production systems are responsible for a large amount of anthropogenic GHG emissions. However, there is also an opportunity for large emission reductions through improved (system-specific) feeding and manure management, primarily in low-yielding smallholder production systems of many developing countries. Accurate quantification of the reductions in GHG emissions (or emission intensities) and the development of sustainable intensification strategies require empirical data on existing (in particular smallholder) systems using a holistic, multidisciplinary systems approach.