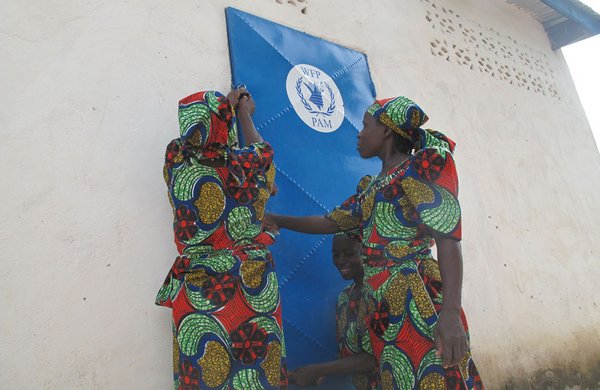 Most of the 410 WFP-supported granaries are founded and managed by women.
Photo: J. Howard, WFP

The UN World Food Programme (WFP) in Cameroon, in co-operation with the Government, the European Union and local NGOs, has developed a system of village granaries to minimise the effects of high prices, droughts and other disasters on food security and nutrition.

Village granaries are small warehouses used to store farm produce with the aim of making food available all the year round. Most of the 410 WFP-supported granaries are founded and managed by women. They are a tool for local development that allows for effective responsibility and participation of local communities in securing food access for the most vulnerable people during the lean season. In this manner, more than 2.7 million people were provided with 3,711 tons of grain from 2008 to 2010.

A village granary is a cereal reserve in the form of a revolving fund constituted in the harvest period and kept in stock to be sold at affordable prices to community members when cereals get scarce and expensive on the local market. The villagers avoid falling into the hands of unscrupulous traders who put up prices when commodities are in short supply.

Family strategies of conservation, planning and use of food crops originate from ancient times in almost all African regions with a fragile ecology. Community granaries have been tried elsewhere in West Africa and are well suited to regions of northern Cameroon, part of which lies in the dry Sahel zone.

Villagers can access the granary in three ways. They can withdraw stocks from the granary as a food loan during the lean season (generally July – September) and “pay them back” later with their own crops during harvest time. They can buy stocks from the granary during the lean season at affordable prices. Or they can deposit a portion of their harvest into the granary in order to access a small cash loan; once it is repaid (plus interest in the form of a small amount of cash or cereal), they get the commodities they deposited back. Families who do not have crops to deposit can provide other forms of collateral, such as goats, sheep or chickens.

The management committee determine when to open the granary, the sales prices and conditions for loans. They also identify the members of the community who could buy or benefit from loans. Two or three well-respected members of the community are selected as key-holders, and they act as storekeepers. Both – or sometimes all three – key-holders need to be present to unlock the granary. WFP provides an initial stock of 10 metric tons of cereal, and the capacity of most village granaries is 20 to 40 metric tons. On average, granary groups consist of around 30 members, with women comprising 89 percent of the management committees.

The type of food crop stored depends on the populations’ preferences and habits. In general, in northern Cameroon it is either millet/sorghum or maize. Revenue collected from the sales is secured in local microfinance institutions. During the harvest period, when cereal prices are low, the management committee withdraws money and embarks on purchases to reconstitute the stocks. This cyclic process allows households to have cereal stocks available all the year round and avoid having to buy at extortionate prices. Local NGOs provide technical, organisational and managerial capacity-building to the management committee members, training them in food storage, book-keeping, etc.

The benefits derived from this seasonal process – of buying, storing, conserving, selling and saving – contribute on the one hand to increasing village food security, and on the other to realising communal, social and economic micro-investments such as grain mills, water pumps or school supplies and creating an income-generating activity for the group.

To watch a short video on the project, please visit:
www.wfp.org/countries/Cameroon/Media/Saving-Up-For-A-Grainy-Day