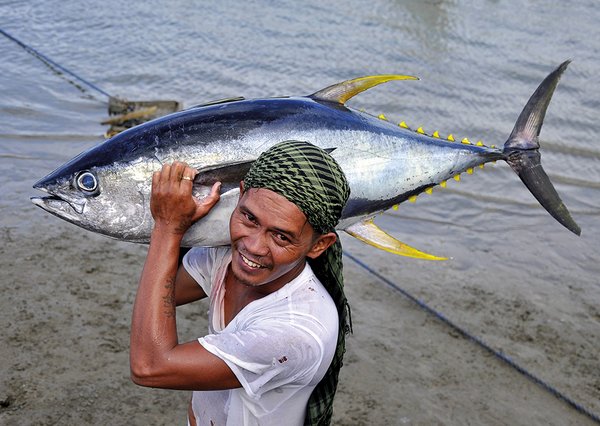 A fisher and his catch in Mamburao/Mindoro Strait. The dwindling tuna stocks in the Philippine waters are putting the fishers and their families at risk of losing their livelihoods.
Photo: WWF/G. Yan

Towards sustainable tuna fisheries in the Philippines

A project run by the WWF has set itself the goal of transforming Philippine tuna fisheries towards more sustainable practices, securing the livelihoods of the small-scale fishers in the long term. European buyers who have committed to source from them provide the necessary incentives.

Tuna are highly migratory fish which undertake long distance migrations through the world’s oceans. With annual global catches of about 4.6 million tonnes of the major commercial tuna species (2013), they belong to the most popular food fishes. But industrialised tuna fishing comes at a high ecological price: longline vessels deploy millions of hooks every day, and purse seiners with huge nets encircle anything that swims under the fish aggregating devices (FADs). These unselective fishing methods cause millions of other non-target marine animals to die as by-catch, such as threatened sharks, billfish and sea turtles. Purse seines also catch small, juvenile fish of overfished tuna stocks, such as bigeye tuna (Thunnus obesus) or bluefin tuna (Thunnus orientalis). Due to the high fishing pressure, 35 per cent of tuna stocks are overfished.

Catches of yellowfin tuna (Thunnus albacares) in the Western and Central Pacific Ocean reached 536,000 tonnes in 2013, to which the Philippines domestic fisheries contributed about 47,000 tonnes. Yellowfin tuna supports the Philippines’ domestic food supplies while also being the country’s biggest seafood export commodity at 260 million euros per year.

A case for handline fishing

Tuna fishery in the Philippines is more or less open access, with few measures in place to restrict catch levels. It is divided into municipal fisheries, mainly artisanal fishers using small boats, and commercial fisheries with boats larger than three gross tonnes. The commercial vessels use various fishing gears such as trawls or ringnets which can catch large amounts of juvenile yellowfin tuna and other non-target species. Up to 87 per cent of total yellowfin tuna landings are small juveniles (0.5–3 kg), with pressure exceeding sustainable levels. This has led to a decrease of yellowfin tuna biomass in Philippine waters and a dramatic decline of the adult yellowfin tuna catches to only 25 per cent of their 1990 level within 20 years. Artisanal handline fishing operations need to extend further out into the sea to evade the increasing fishing pressure in nearshore areas. These fishers, originally fishing inwaters up to 15 km from the shore, are now operating up to 100 km offshore.

Artisanal tuna handline fishery has very little by-catch of other species or juvenile tuna. Two to five fishers are employed on each vessel. Every fisher works with a single hook and line deployed at depths of between 50–150 metres targeting only individual, mature tuna. Its selectivity makes the handline fishing method an environmentally sound practice. It has been securing the income of many families for generations.

The dwindling tuna stocks in Philippine waters are putting these fishers and their families at risk of losing their livelihoods. To halt the downward trend of the yellowfin tuna stock and to secure the income for artisanal fishers in the long-term, the World Wide Fund for Nature (WWF) and the food processing company Bell Schweiz AG explored possibilities of improving the sustainability of tuna fisheries. In 2011, WWF launched the “Partnership Project Towards Sustainable Tuna Fisheries” (see Box below) in two of the most productive fishing areas in the Philippines: Lagonoy Gulf and Mindoro Strait. Roughly 5,800 handline fishers with 3,200 vessels joined the project.

The “Partnership Project Towards Sustainable Tuna Fisheries”
The WWF project is aiming to transform Philippine tuna fisheries towards more sustainable practices. Through strong stakeholder involvement and market incentives from buyers in Europe, fisheries governance is gradually being improved. The project is aiming for Marine Stewardship Council (MSC) certification of the yellowfin handline fisheries in the project sites by 2017. In addition, it seeks to provide economic benefits to small-scale tuna handline fishery through capacity building on the proper handling of tuna, as well as generally improving the supply chain through ensuring a robust traceability back to legal catch and quality improvement work with the landing stations and tuna processors. The European-based retailer COOP and the processing companies Bell Schweiz AG and Sea Fresh BV have made long-term commitments to market the handline-caught tuna in Europe. They financially support the project, which is a private-public partnership, together with the German Investment and Development Corporation (Deutsche Entwicklungs – und Investitionsgesellschaft, DEG).

To empower handline fishers to participate in fisheries management, the project facilitated the formation of tuna handline associations. A series of community consultations were conducted among the 112 tuna fishing villages of Lagonoy Gulf and 28 tuna fishing villages of Mindoro Strait, during which fishers’ representatives were identified. Based on community feedback and issues identified by the tuna fishers, a community organising framework was designed. Several municipal tuna fishers associations were then founded and legally registered with the authorised agencies.

Close collaboration with partner institutions, such as the Bureau of Fisheries and Aquatic Resources (BFAR) and the Local Government Units, was instrumental in the formation of tuna fishers’ organisations. In order to give the fisheries sector higher priority than it had previously had in all municipalities, the project employed an outreach strategy to gain the support of key local authority staff. The local officers were explained that project interventions were designed to improve governance and secure the livelihood of their constituents via meaningful and active participation of stakeholders in the tuna fisheries management process.

The project encouraged transparent and fair pricing practices and taught fishers how to determine the quality of their fish. Tuna prices are determined through a grading system, ranging from A grade for high-quality red meat down to C grade for light-coloured meat. Tuna that has been exposed to higher temperatures during catch and transport usually turns out with a light-coloured meat and is not suitable for the high-priced surimi market. Through improved handling practices, such as correct storage and improved cooling techniques for the catch, fishers can now actually earn more without having to catch more. The improved quality of the tuna adds substantial value to the catch. The fishery thus becomes more profitable without the need to increase fishing pressure.

In addition, WWF conducted numerous hands-on trainings as well as providing traceability manuals to the owners of the landing sites and processing companies in the supply chain. These training included discussions on illegal, unreported and unregulated (IUU) fishing that emphasised the importance of adhering to fishing regulations and the monitoring of fishing efforts through licensing and registration, on the proper use of the fish catch documentation and the importance of traceability back to the catching vessel.

The project supported local fishery authorities and fishers in introducing a registration and licensing system to better regulate fishery. More than 70 per cent of the tuna fishing vessels in the project regions have now registered, and fishers have obtained fishing licenses. This provides local authorities with a system to monitor and control fishing activities and combat illegal and undocumented fishing in their waters. To ensure compliance with fisheries laws, WWF also trained fishers volunteering to help patrol fishing areas to detect and report non-compliant fishing activities.

In addition, governance structures have been strengthened by facilitating the establishment of so-called Fisheries and Aquatic Resources Management Councils (FARMCs), which are required by Philippine Law to enable participation of stakeholders in the governance of aquatic resources. The Councils bring together scientists, relevant government agencies as well as representatives of the newly formed tuna fishers’ organisations, who now have seats in the Council and a voice on matters related to governance of their tuna resources.
Fishers now document the catches and provide certificates that give information on the location and time of the catch. Moreover, research plans have been developed to be implemented by local universities in both project sites to help inform a sound management of the tuna resources in future. WWF carried out additional data collection on bait and by-catch species to assess the risk of negative impacts of handline fishery. It appears that the risk of fishery negatively impacting on other marine species or the ecosystem is negligible.

The annual process of licensing of tuna vessels grants fishers the right to gain access to fishery resources within the Philippine waters. But the implementation of the licensing systems varies from one municipality to the other. While some offer a free system, others charge, and licensing fees are difficult for the fishers to afford. A major challenge of the project was to harmonise these varying policies in order to find some licensing scheme that facilitated high compliance for tuna fishers in order to combat illegal, unreported and unregulated (IUU) fishing.
By using the MSC criteria for assessing progress, improvements regarding socio-economic conditions of the fishers were not sufficiently quantified, as the MSC does not include such criteria. Clearly, there are benefits for the fishers in the project, such as a higher value of catch through capacity building on fish handling, as well as empowerment of the small-scale sector to participate in governance, which enables a degree of co-management. However, to measure effects of these improvements in socio-economic terms, additional benchmarking criteria to objectively quantify the socio-economic changes are necessary. Therefore, WWF will explore the use of socio-economic criteria for small-scale fishers further. Guidelines and standards such as the FAO Guidelines for small-scale fisheries (see article on page 20) and fair trade standards are likely to form a good basis in this respect.

In June 2014, the Philippines had been warned by the European Commission by means of a so-called “yellow card” for being non-co-operative in the fight against IUU fishing. Shortcomings, such as lack of system of sanctions to deter IUU activities and lack of adherence to regional conservation management measures for fish stocks, had been identified. The EU warning triggered a rapid reform of the fisheries law in the Philippines. The reform has also led to the political will to review the national and local tuna management plans for Lagonoy Gulf and Mindoro Strait, which means stronger measures to ensure a sustainable tuna fishery can be included.

First policy measures for sustainable fisheries management have been enacted. A major task ahead to reach MSC certification is to see to it that the tuna management plans are reviewed to ensure sustainable catch levels of yellowfin tuna in Philippine waters. With the newly formed handline fishers associations, small-scale fishers in the project sites now have the mandate to participate in the drafting of the tuna management plans, thus enabling them to secure their access rights in years to come.

With the envisaged MSC ecolabel, tuna from the Philippine handline fisheries can be readily recognised and accessed by the consumer. The project will set a precedent: tuna travel across entire oceans, so it is important that their stocks are managed sustainably not only at local, but on a regional scale. To this end, the WWF Partnership Project can be used as a learning model for tuna mangers in other regions.