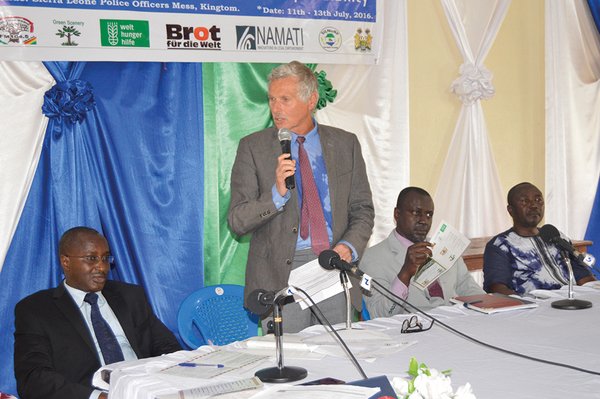 Those in darkness drop from sight

Sierra Leone is one of the least developed countries in the world and is still recovering from a civil war that ended in 2002. Increasingly, the Sierra Leonean government seeks to attract foreign investors through providing opportunities for large-scale land leases for the development of agribusiness. This has triggered a rapid transformation process that poses a considerable threat to food security and social stability. Despite being a pilot country for the implementation of the Voluntary Guidelines on the Responsible Governance of Tenure, there is no real change on the ground as yet.

In February 2011, villagers of Malen Chiefdom in Pujehun District in the South of Sierra Leone were informed by their Paramount Chief that their land was going to be allocated to a foreign company. The investor was Socfin Agriculture Company S.L. Ltd. (SAC), a subsidiary of the Belgian corporation Socfin, registered in Luxembourg. Socfin leased 6,560 hectares of agricultural land in Malen Chiefdom for a period of 50 years, with the option for renewal for an additional 25 years. The land in Malen Chiefdom was leased by the Ministry of Agriculture from the traditional authorities and sub-leased to SAC.

On March 5th, 2011, a chiefdom meeting was held for the signing of the contract. It was guarded by armed security forces; the Paramount Chief, the Sierra Leone Minister of Agriculture and the General Manager of SAC were in attendance. The latter brought along 173 million Leones, about 40,000 US dollars. This was meant to be the landowners’ share of a year’s rent. The annual rent for an acre of land is five US dollars (USD), which means 12.50 USD a hectare, but 50 per cent of this rent is deducted for the District Council, the Chiefdom Administration and the National Government.

In Sierra Leonean traditional law, the land is owned by families, while land rights are managed and controlled by the family head. The Paramount chief, as the highest custodian, plays a key role in the process, but the decision to lease land is always taken by the family who provides the land. However, in this meeting, the lease agreement was signed by some of the section chiefs that are appointed by the Paramount Chief without consultation of the landowning families. The money was stacked on the table for all to see but directly paid only to those who signed. However, even for those who signed, it was not clear that this was the first payment of the rent and that accepting this money meant that the land lease was sealed. They thought it to be “handshake money”, a present that a visitor is usually expected to bring to his host.

Malen Chiefdom has 63 villages. To date, except for the area of eight villages, the whole chiefdom is covered by the plantation. With the conversion of the land into a large-scale palm oil plantation, subsistence food production has stopped. Discussions in affected villages showed that the people had assessed the supply of basic food items in general as “abundant” to “satisfactory” in the years prior to the investment. Production was sufficient and surplus could be sold. By May 2012, all interviewees reported that they now had less food available in their households. Stored foods such as dried cassava, groundnuts and oil palm had been exhausted. Wild foods were hardly available any longer, since the bush land had been cleared. In just a year’s time, market prices for food in the region have risen by 27 per cent, whereas the national inflation rate varies between 11 and 18.5 per cent.

The agriculture-based subsistence economy was transformed into a labour-based economy. But the employment opportunities created did not suffice as an alternative way of creating access to food. The contract contains no clause about employment that would give those villagers who had lost their land preference for jobs. And work is mainly available on a daily or piece rate basis. Payment per day is 10,000 Leones (2.20 USD). If only one family member is hired, the salary will fall far short of what is required to cover the daily food needs of the family, let alone other expenses like school fees or healthcare. So it does not bring people above the poverty line. The number of jobs created is unclear, as well as the boundaries of the actual investment.

Intimidation, no consultation, lack of transparency

From the outset, communities denounced the Socfin land agreement as illegitimate. The land owners affected formed a community-based organisation called “Malen Affected Land Owners and Land Users Association” (MALOA). Already in 2011, MALOA members expressed their concerns in letters to the local and national authorities that described the shortcomings of the process: inadequate consultation, lack of transparency, inadequate compensation, high levels of corruption, destruction of livelihoods, appalling working conditions for labourers working in the plantation, lack of proper documentation of financial transaction with landowners, failure of the company to mark the boundaries of family lands before clearing, destruction of the biodiversity of ecosystems and so on. In sum, this included just about everything that goes against the Voluntary Guidelines on the Responsible Governance of Tenure (VGGT). As the human rights network FIAN reports, community protests have sometimes been violently repressed by the local police, even with the use of live bullets, and dozens of people have been put in jail. MALOA members report that they are not allowed to meet and assemble peacefully.

A pilot country for the implementation of the VGGT

Sierra Leone is a pilot country for the implementation of the VGGT, which provide for processes that ensure “active, free, effective, meaningful and informed participation” of affected landowners (VGGT 3.B 6.), that protect “legitimate tenure rights” which include also customary and informal rights (VGGT 3.A) and in general improve the governance of tenure “with an emphasis on vulnerable and marginalized people, with the goals of food security and progressive realization of the right to adequate food” (VGGT Objectives 1.1). Implementation in Sierra Leone is flanked by a trilateral G7 partnership on land between the governments of Sierra Leone, Germany and the United Nations Food and Agriculture Organization (FAO), and also supported by other donors like the UK and institutions such as the World Bank. A multi-stakeholder platform for the implementation of the VGGT was established including five ministries and civil society.

One achievement is the integration of the VGGT into the new National Land Policy, which received Cabinet approval in November 2015. Other tenure-related laws and governance systems were assessed to identify gaps. An action plan was formulated by the multi-stakeholder platform to identify responsibilities and implement the recommendations. Other activities include trainings by FAO on the VGGT at community level and to increase transparency by disclosing government contracts for land acquisitions. However, it remains to be seen whether improved co-ordination and transparency will ultimately translate into political will to implement the reforms needed and to disclose the leases the government has entered into with private companies.

So far, there is no sign of the government and the investor’s seriously reviewing the process in light of the VGGT. Supporters of the Socfin investment argue that NGOs and CSOs should not interfere and that investments like these are urgently needed for a poor country like Sierra Leone. And indeed, the investment does have positive effects, like the construction of an oil mill, infrastructure or social and capacity building projects. Nevertheless, if it is creating a gulf between “winners” and “losers”, social cohesion will be in danger.

Sierra Leone is still well set to make use of its pole position in implementing the VGGT for an inclusive development of the country and especially the agricultural sector. One important first step forward was a National Conference on Land Governance, held in Sierra Leone’s capital Freetown in July 2016, organised by national CSOs with the support of German NGOs, attended by government officials and at least one investor (not Socfin). There must be serious ongoing dialogue, giving a voice and power to those directly affected by land grabbing. The German poet Bertolt Brecht, in his famous “Threepenny Opera”, wrote the lyrics: “And you see the ones in brightness. Those in darkness drop from sight.” So special attention should be given to those in the darkness.
If there are no peaceful solutions that restore justice, this could be a source of violent conflict, and everybody will lose.