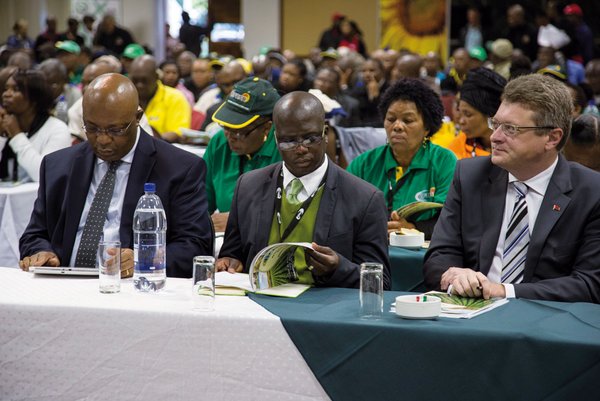 The role of farmers’ organisations in defining national policies

Farmer organisations play a crucial role in the development of rural areas. But how influential are they when it comes to defining national policies? What can they achieve, and where are their limits? Our authors demonstrate this with regard to the small farmer organisations in South Africa.

In developing countries, growth in agriculture has proven to be more effective in reducing poverty than equivalent growth in any other sector, and in sub-Saharan Africa this is as much as 11 times more effective than in non-agricultural sectors. Hence the world has been seeking better ways of growing the agricultural sector, and in the process realised that farmer organisations could play a central role in driving the intended growth.

In Africa, the role of farmer organisations in driving the development of the sector has increased over the years, especially after the economic structural adjustment programmes that reduced government involvement in providing vital support services such as extension and linkage to markets. In South Africa, the agricultural sector was deregulated in 1996, leaving the farmers vulnerable to free market forces. The shock eliminated many of the smaller commercial farmers, and the number of commercial farmers dropped from 60,900 in 1996 to about 37,000 large-scale farmers presently. Like many of the established commercial farmers, smallholder farmers had had no incentive to acquire marketing skills under the regulated environment, leaving them worse off after deregulation. They lacked appropriate training as well as access to marketing information and marketing infrastructure. Unlike the established commercial farmers who had commodity organisations as well as firmly rooted unions such as AgriSA and TAU SA, the majority of smallholder farmers were not nearly as well organised, especially at national level, where there was only one newly-established organisation called the National African Farmers’ Union (NAFU). They were left in the lurch, with virtually no access to information of what to produce, how to produce it, how much to produce and where to sell.

NAFU was established in 1991 as the first national organisation representing smallholder farmers’ interests. Its main objectives were to:

These are still core issues concerning the smallholder farmers in South Africa about which their representative organisations should ensure that there are national policies that build the production capacity of the farmers and enable them to participate meaningfully in all available markets.

In the broader sector there are macro-economic factors, such as international trade arrangements, tariffs and taxes, and high costs of inputs and doing business. While important, these issues tend not to feature strongly in the lobbying and advocacy of farmer organisations that represent smallholder farmers. The main reason for this could be that the current major focus amongst most smallholder farmers in the country is to access land and/or have tenure security on land, which will enable them to invest on a long-term basis. Secondly, they need basic knowledge and technical skills of what to produce, for which market and how. Thirdly, smallholder farmer organisations lack the well-built structures that farmer organisations of established commercial farmers have, with enough resources to engage appropriately qualified technocrats to handle and advice on the various aspects that impact on the sector.

Smallholder farmer organisations largely recognise and uphold their obligation to influence national policies in favour of the smallholder producers, especially to transform the sector and enable broader participation. Smallholder farmers usually join farmer organisations to derive social and economic benefits, so they have an internal rather than external focus. Also, because of the heterogeneous membership (youth, women, poorer and developing farmers), the internal expectations from the organisations are usually correspondingly diverse, exerting much pressure on the leadership of their organisations to deliver in a meaningful and measurable way to each subgroup.

One of the major challenges for the smallholder farmer organisations in South Africa was growing in a time when there was reduced government direct support to the sector as a result of deregulation. They therefore had to immediately contend with ensuring that the members were receiving appropriate services, while at the same time urging that policies provided for such services to be available on a broad scale.

On the whole, the farmer organisations in South Africa have raised the concerns of the smallholder farmers to appropriate authorities. However, concrete proposals of how exactly the government should address farmer capacitation issues have perhaps been lacking. The farmers’ organisations have often reacted to how existing and new government farmer support and development programmes (such as Land Redistribution for Agricultural Development [LRAD], Comprehensive Agriculture Support Programme [CASP], Micro-Agricultural Finance Schemes of South Africa [MAFISA], extension services and recapitalisation fund programme for land reform beneficiaries) have not been effective in providing the intended support. The attempt to influence farmer support has thus largely been reactive to programmes rather than proactively influencing the formulation of policies that yield these programmes.

Limited funding has probably been the principal stumbling block, curtailing the organisations’ ability to influence policies accordingly, and, e.g. in the case of NAFU, to communicate with members, convene members’ meetings and employ capable staff with adequate resources to address farmers’ needs. In some cases, this was confounded by self-serving leaders using the organisation to their advantage. Such constraints made it difficult for effective representation and policy engagement.

Parallel to the farmer organisations’ efforts, the government’s relationship with them also impacts on their ability to influence national policies. On the whole, the South African government has been open to working with organised agriculture in developing policies and programmes, and states this in its strategic documents (e.g. as in the Strategic Plan for South African Agriculture, 2001 and all subsequent plans). In practice, however, the officials frequently want to facilitate the formation of other organisations outside the already established ones or do not trust the legitimacy and representativeness of the existing organisations. They hence call up meetings of farmers in general, without necessarily going through the leadership of the existing organisations. In such instances, it has been up to the leaders of the farmer organisations to approach the relevant government representatives and insist on their inclusion in the processes as organised agriculture, which has worked well in a number of cases.

In recent years, the consultative processes have been progressively more inclusive, the classic example being the manner in which the Department of Rural Development & Land Reform conducted its consultative processes in developing policies out of the recent green paper on land reform. The Department used National Reference Groups (NAREG) consisting of farmer representatives from each province and representatives of stakeholder organisations. The NAREG were used as public forum platforms, discussing and providing input into the proposed policies on land reform. The impact of the farmer organisations under such a process would depend on how consistent their representatives were in participating in the consultative processes, the extent to which they consulted and provided feedback to the groups that they represented, how informed they were about the policies and what needed to be done, and whether they could engage at national level with relevant government representatives and ensure that their position was heard and considered.

The limited institutional capacity has generally limited input into the broader macro-economic issues. However, since these directly affect the entire agricultural sector, the organisations of established farmers have tended to handle them on behalf of the sector. Typical examples here include negotiations on wage determination, and input into the development of water policies and into the tariffs related to meat imports.

Members of organised agriculture have increasingly realised that, despite differences between developing and established farmers, with one group still seeking means of production and the other looking for more market opportunities locally and abroad, the sector cannot be as influential as possible as long as it remains divided. Hence the Agri-Sector Unity Forum (ASUF) was established in 2011, consisting of the following organisations:

Under ASUF, participating organisations can speak with a united voice on matters of common interest where consensus has been reached. Since its establishment, ASUF has presented the need to support growth of agriculture to the ruling party, and provided strong opinions and recommendations of labour wages, land reform and Agricultural Broad-Based Economic Empowerment (AgriBEE). Endeavours to have policy standpoints on various issues and thus proactively influencing policy reforms are a notable development within ASUF. Thus the united sector has the potential to pool together a critical mass of resources and represent a balanced view (of both smallholder and large-scale farmers) on the policies required in the sector. On the other hand, because of the disparities between the smallholder and established commercial producers, and the entrenched structures, it will probably take a few more years before all organisations truly amalgamate into one body.

Experiences with the revitalisation of NAFU

In 2010, the National Emergent Red Meat Producers’ Organisation (NERPO) was tasked to revitalise the then existing farmers union, NAFU, after it had been be-riddled with a number of challenges that virtually left a vacuum in the representation of smallholder farmers in the country. As part of the exercise, NERPO conducted surveys of stakeholders and farmers to determine what the perceived problems were with the existing national union and what their proposed solutions were. According to the farmers’ opinion, the union was there to:

The responses were indicative of the needs on the ground, and hence the type of policies
that the unions should drive in order to ensure that the farmers were developed.
The farmers felt that the union had not met their needs for a number of reasons, which
included poor governance, poor communication with members and lack of capacity
and required resources.