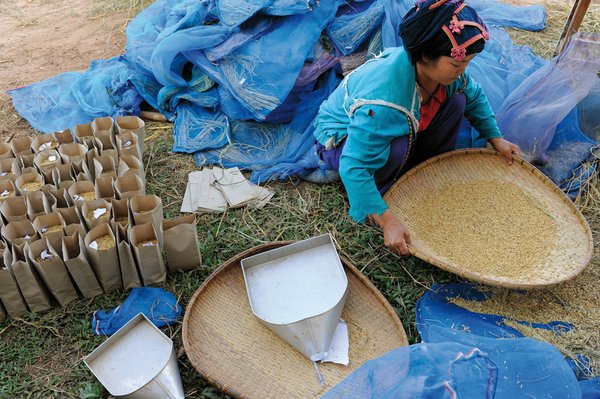 Rice varieties at Naphork Center are developed in close cooperation with the farmers. Consequently, the varieties are very well accepted.
Photo: J. Boethling

Laos has achieved a minor miracle. For some years now, this Southeast Asian country has been able to feed its people with rice that is exclusively grown locally. However, the success story is under threat.

Bounthanh Nhanphatna is sitting in the shade, under a gnarled tamarind tree. Her hands are callused. In spite of this, she is so deft at weaving a basket with bamboo fibres that the eye of the observer can hardly keep track of the movements. “Which sort I like to grow best? No question: Hom Sang Thong!” Behind her, in a hollow, you can see the rice paddies of Ban Hai Tai, a small village in Laos, to the north of the capital Vientiane. Bounthanh Nhanphatna also cultivates her two hectares in the hollow, partly growing black rice, but above all Hom Sang Thong. “It provides the best yields.” The 50-year-old knows all about rice: she has been growing it all her life.

Food security, not only for farmers

Rice has been grown in Laos for around 4,000 years. Rice is the chief staple food of the Laotians. The inhabitants of this Southeast Asian country eat it mainly as sticky rice. The varieties containing starch are cooked in a bamboo basket with steam – for breakfast, lunch and supper. Each of the just below 6.2 million inhabitants consumes an average of one kilogramme a day. Most of the rice is self-produced. Four fifths of the people in Laos grow rice. In a country only slightly smaller than Great Britain rice is grown in an area of around 700,000 hectares. In this manner, many Laotians provide food for their families alongside their true professions. Wages are low in the country. For example, an agricultural engineer earns the equivalent of a mere 125 US dollars a month.

For a long time, Laos was unable to feed itself. Although there were no major famines, malnutrition and food insecurity were on the daily agenda for decades. But since 1995, the country has been able to double its yields – by improving cultivation methods and through the introduction of new seed or the optimisation of existing varieties. In the 1960s, the average yield per hectare was below one tonne. Today, the rice farmers harvest an average of nearly three tonnes per hectare, and in especially good regions, there might even be seven tonnes. Compared to industrial rice cultivation, this may sound modest, but for mountainous Laos, with its extremely compartmentalised agriculture, this is a significant improvement.

This agricultural revolution has been driven by the Laotian government, the International Rice Research Institute (IRRI), various aid organisations and the people in the villages – such as farmer Bounthanh Nhanphatna. She can achieve up to four-and-a-half tonnes a hectare with her local variety. “It used to be less than half this amount.” Success was not immediate: Bounthanh Nhanphatna had to try several local varieties. For twelve years, she has now been producing her own seed. She makes her own fertiliser, and in addition, together with the other farmers, she has improved marketing. Recently, she started growing rice for fair trade that is distributed via Claro in Switzerland and via Gepa in Germany. And the farmers of Ban Hai Tai have given their local varieties new names: “We used to call this variety ‘Little Man with a Black Bottom’,” Bounthanh Nhanphatna laughs. “But we thought that was too negative, and have renamed it Hom Sang Thong.” Translated, Hom Sang Thong means ‘Fragrance of Sang Thong’, which is the name of the province the village is situated in.

The Naphork Rice Research Center, IRRI’s Laotian co-operation partner, is on the outskirts of Vientiane, and is surrounded by 180 hectares of fields for trial cultivation. The Center operates the country’s only seed bank. Wrapped up in little plastic bags, around 2,000 different local rice varieties and more than 13,000 samples are stored in wooden shelves in a simple wooden shack. The users of the local varieties have also given them their names. The institute is continuing to use them. The bags are marked in red Edding with: ‘Little Chicken’, ‘Fat Duck’ or ‘Forgotten Husband’. “Because this variety tastes so good that the wife forgets her husband,” says Phoumé Inthapanya, his gaunt face breaking into a laugh. This 56-year-old agricultural engineer did part of his studies in Vietnam, and has been working on rice for more than 35 years. He has been director of the Naphork Center since 1991.

Local varieties are adapted to the micro-climate, the soil texture or cultivating methods in the region. “We have developed twelve varieties and some sub-varieties of TDK from them,” the rice researcher explains. TDK stands for Tadokam, the translation of which is ‘Port of the Yellow Flowers’. “Our method has mainly consisted of mass selection and conventional cross-breeding, but recently, we have also applied genetic engineering in individual cases.” In addition, the scientists used the same methods to enhance 14 existing local varieties. Sometimes, seed from Thailand or the Philippines is also crossbred to optimise or develop local varieties. In return, IRRI uses varieties from Laos to improve rice varieties for cultivation in Bangladesh or India.

“The length of the stem, the size of the grain, storm resistance, water requirement, length of ripening period, taste, nutritional value, consistency – the demands on all these parameters may vary considerably locally. We develop the varieties in close co-ordination with the farmers – they are the ones who are supposed to grow it,” the director explains. “This is why our varieties enjoy a very high level of acceptance.” The research centre operates branches throughout the country in which new and improved varieties are distributed and instructions on growing them are handed out. The farmers receive the varieties free-of-charge. Seed firms have to buy them. They can multiply and then sell the rice varieties without having to obtain a licence.

Next year, the research centre intends to introduce a TDK variety that can survive prolonged flooding of the fields. In the course of climate change, unusually severe and long-lasting flooding has been occurring more and more frequently.

Now Laos is even producing a modest surplus, part of which is exported. “Our rice is of best quality and has often been grown without chemical fertiliser or pesticides,” says Khamphenphet Chengsavang, who runs one of the country’s largest rice mills. This entrepreneur has just invested a million US dollars in a sorting machine. So far, he has above all been supplying the police and military in Laos. But for two years, he has also been exporting to Thailand, China and Vietnam. However, all that glitters is not gold. Laos may have managed to feed its people with the country’s rice. Neither have the world-wide price hikes had an impact on the country’s staple foods. But is Laos going to be able to feed its population in the future, too?

Laotian farmers cultivate their fields mainly by hand. They do employ hand tractors in some regions, but only where the fields are not situated along steep slopes. However, rice-growing is performed in a fifth of the overall cultivated area. There, the fields are hardly larger than a handball pitch. Each year, the farmers move on with their fields. They clear trees and bushes with their axes and machetes and then burn them. The ashes provide fertiliser. In the rainy season, they cross the fields with sticks and poke small holes into the ground. Each of these holes is filled with a rice grain. The farmers leave a field they have harvested fallow for a few years and let it get overgrown. Then it is burnt down again and cultivated. In former times, slash-and-burn clearing and nomadic farming fitted into the region. The steep slopes cannot be tilled with tractors or water buffalos. There is a lack of suitable land, labour and resources for terraces and artificial irrigation systems. But such cultivating only yields poor harvests. A hectare will provide barely one tonne. Moreover, slash-and-burn cultivating is eating its way ever deeper into the forest-clad hills. Thus they are becoming more and more barren – with disastrous consequences for the microclimate and water reserves. “This method of cultivation may have worked for centuries, but now it can no longer feed the growing population,” says Holger Grages of Welthungerhilfe (WHH).

Investors are just around the corner

The problem is being aggravated by a growing number of plantations, usually with gum or teak trees. Investors from the neighbouring countries of China and Vietnam sign contracts with farmers for them or directly take a lease on land from local government that they then have cultivated. Many farmers are unable to assess the risks of contract farming. “Neither do they possess any titles of ownership for the fields that they have cultivated using the slash-and-burn method,” Grages adds. The aid organisation is attempting to counter adverse developments by extending irrigated rice cultivation and crop diversification. In the dry season, the farmers only grow gherkins, basil, maize, Job’s tear grass or sorghum.

Even in the fertile lowlands, investors are knocking at the doors of the smallholders more and more often. “Companies from South Korea, Vietnam, China and Kuwait have already called on me, and they all wanted to grow food for exports,” says Kham Phey. This 46-year-old is cultivating two hectares of HDK rice varieties for the local market. Thanks to artificial irrigation, he can bring in two rice harvests a year. Even three would be possible. But most Laotian farmers are not in favour of this. They fear price slumps on the local market as well as exhausted soil.

For its own consumption, the family prefers a variety called ‘Aromatic Swallow’. “It is not quite as high-yielding, but it tastes a lot better,” Kham Phey laughs. His family are doing well. A satellite antenna has been fixed to the stone house, and a brand new motor scooter stands in front of the building. To the back of the yard, mango trees are growing in half a hectare of land, and their fruit sells well. Even so, he can imagine leasing his land. “Why shouldn’t I, if the terms are alright?” But long-term lease-holding is forbidden in this district – officially, at least. That Kham Phey would lease his land is also because his two children are studying in the capital. Neither of them is keen to take over the farm.
Bounthanh Nhanphatna faces a similar dilemma. Thanks to her increased income, this farmer from the province of Sang Thong can enable some of her children to study in Vientiane. Those who have stayed in the village have gone into business with a small tailor’s shop and a beauty parlour. They are helping with the farm, but in the long run, the successful rice farmer wants to have the land cultivated by hired labour. Once the up-and-coming generation have migrated to the city, it will not be possible to maintain the success of Laotian rice-growing.

Laos in figures
- 75 percent of Laotians are employed in the agricultural sector, a major share of them in subsistence farming.
- 30 percent of the gross national product is produced in the agricultural sector.
- Since the economic opening up of the socialist country in the mid-1980s, mining, energy (hydropower), light industries and tourism have become important driving forces of economic growth attaining rates between 6 and 8 percent.
- The government hopes to enable Laos to join the group of developed countries by 2020.