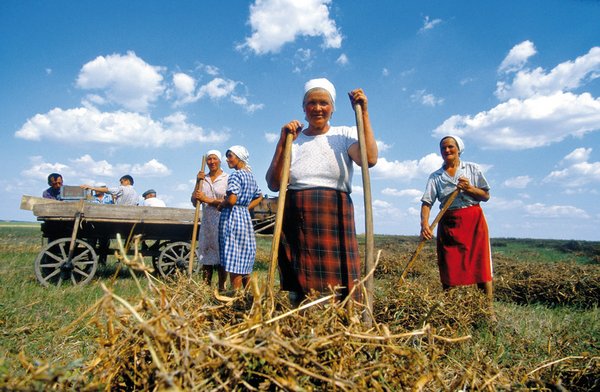 Many cooperatives in transition countries have difficulties in coping with their new economic freedom
Photo: laif

Attempts to harness cooperatives for the purposes of the state are just as old as the notion of independence, which is inherent in the concept of the cooperative. In many countries, this has resulted in a deep distrust of cooperative organisations. In the transition economies in particular, the question arises whether and how cooperatives can survive.

Cooperatives in the industrial age have always performed tasks for the benefit of society. The founders of the present cooperative movement were not only social philosophers, theologians, lawyers, economists or entrepreneurs (see article "Cooperatives - the magic bullet of poverty reduction?") but also had a particular socio-political perspective. For them cooperatives were not just institutions for providing economic benefits for their members; they were also a strategy for liberation from dependency of any sort, whether economic, social or political. The cooperative system of values, together with the key features of the structure and functioning of cooperatives, of the relationship between cooperatives and the state and of the promotion of cooperatives by the state are encapsulated in a number of international standards:

Threats to the value system

What is a cooperative?

“A cooperative is an autonomous association of persons united voluntarily to meet their common economic, social, and cultural needs and aspirations through a jointly owned and democratically controlled enterprise. ... Cooperatives are based on the values of self-help, self-responsibility, democracy, equality, equity and solidarity. In the tradition of cooperative founders, cooperative members believe in the ethical values of honesty, openness, social responsibility and caring for others.”

In principle the ICA’s standards have acquired international validity – they not only inspire national legislators but should also be binding on them. Yet there is a risk that this system of values is eroded, especially in the following areas:

Position within the economy

While a cooperative is a business enterprise and an association of individuals, it is at the same time an assistance and service system operating in an intermediate zone between hierarchy and market. This intermediate position also binds it to the surrounding economic systems. Four different options are possible here. The purpose of cooperatives can be to

In most developing countries, cooperatives in the classical sense have existed only since their introduction by the colonial authorities and/or European emigrants who brought the European concept and practice of the cooperative to the colonies. This imposed on the developing countries a form of economic organisation which is historically thoroughly European in its origins. It fitted with the mother countries’ considerations of usefulness and also with the view of modernisation prevalent at the time, according to which the cooperative, being a modern form, was to be preferred over traditional forms. In the colonies the colonial governments therefore established one-sided infrastructure systems and economic and administrative patterns that served the interests of the mother countries, with the aim of launching development in the colonies by mobilising social and economic resources.

Practical steps to encourage the introduction and spread of cooperatives were not taken until the turn of the 20th century, and on a larger scale after the First World War. Large numbers of cooperatives were founded rapidly with external assistance, with no consideration of a basis for self-help within the group. Of course this did not happen simultaneously and in the same manner everywhere. There are differences between countries in terms of timing and approach. These differences are particularly apparent in the procedures adopted by the English and the French. The English pursued a strategy of “bottom up” cooperative creation, while the more centralist-minded French preferred a “top down” approach. It was not until after the Second World War – and at the latest upon achieving independence – that the developing countries established cooperative systems of their own. These systems, however, continue to be based on the model of the European cooperative.

Only slowly is the realisation growing that importing foreign models cannot provide a sound basis for cooperative development or short-cut the slow and arduous process of establishing strong member groups “from the bottom up”.

Only if cooperatives have a stable member base can they provide their members with access to new knowledge, markets and sources of capital and help them with issues such as coping with the shift from subsistence farming to agricultural production for the market, overcoming the disadvantages of small business size and developing market power.
Instead of correcting these familiar failings, many development organisations continue to reject the tried-and-tested cooperative model and to experiment with the promotion of less well-tried cooperative-like structures.

Cooperatives in the transformation process

Prior to 1989 the cooperatives in Central and Eastern Europe were used by the Communist regime for their own ends. In a situation characterised by incomplete information and planning failure, the cooperatives’ main function was to serve as stopgaps. As an intermediate form between private and state property they were incorporated into the rigid hierarchy of the centrally planned economic system and subject to its dictates. At the same time, whenever administrative state decisions permitted cooperative schemes as an alternative to state property, all private-sector initiatives (including criminal ones) turned to the cooperative form.

Because of the absence of any theory of transformation, the need to convert the planned economy into a market economy was experienced in all Central and Eastern European countries as a crisis. Experience shows that economic crises boost the popularity of the cooperative idea. This therefore led people to ask whether and to what extent cooperatives can put market principles into practice in a situation in which they must first acquire these abilities themselves. In theory cooperatives are perfectly positioned to:

However, cooperatives can only have these effects if the constituent conditions mentioned above are inherent to them. Under adverse general conditions cooperatives, as self-help organisations, can still support their members to a limited extent, but they are no substitute for state regulatory and process policy and certainly no substitute for the introduction of market-economy conditions.

The next question to arise was that of whether existing cooperatives could survive the process of transformation “from plan to market”.
The position in which the cooperatives found themselves after the system switch was not favourable. After decades of officialisation they were discredited and as a result of the imperative plan their “self-management” had become unattractive and inefficient. The reputation of the cooperatives was and is poor. Although – paradoxically – they were regarded in “real” socialism as being partly based on private enterprise, they are dismissed as relics of the socialist economic system and considered to be unsuited to the transition to a market economy. Often the terms “cooperative”, “Communism” and “controlled economy” are not only mentioned in the same breath but also regarded as inevitably going hand in hand.

The anti-cooperative policies of the Communist parties contributed in no small way to this poor reputation. Cooperative property, in contrast to state property, was held to be underdeveloped and its existence was attributed “theoretically” to the underdeveloped productive forces in the cooperative sector. The cooperative continues to be regarded as a synonym for inefficiency – but now by comparison with the private sector. This overlooks the fact that under real socialism the economic activities of the cooperatives were tightly controlled by the Communist authorities and the cooperatives operated for the most part only in areas in which fixed prices gave them very little leeway.
The transition to a market economy has released the existing cooperatives from the central planning system and given them scope to pursue cooperative business principles. At the same time, however, the transformation has exposed the cooperatives to newly emerged competition from domestic and foreign businesses. For many, knowing how to cope with the “economic freedom” that had been achieved was a problem.

But one thing was clear from the outset: to survive in the new socio-political and economic environment, the cooperatives would have to undergo comprehensive reform involving deofficialisation of both ownership and decision-making structures. Although this has been achieved in most Central and Eastern European countries through the passing of new legislation based on international standards, the cooperatives have still largely failed to shake off their negative image and most of them have been privatised or dissolved.
When considering possible cooperative scenarios for the future it should be assumed that the necessary conditions for the development of cooperatives in the transformation countries will not be established until the transformation process itself is completed.