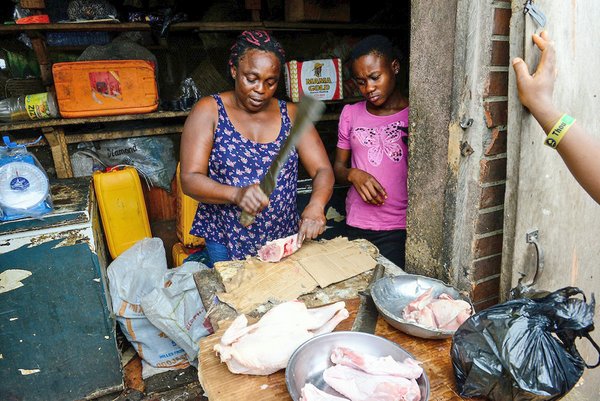 Selling of illegal imported chicken meat from Europe on the Arena market. The meat is smuggled from Benin.
Photo: Jörg Böthling

In 2003, Nigeria banned chicken meat imports to protect the domestic poultry sector. Yet the markets in Africa’s largest economy are full of frozen poultry smuggled over the border from neighbouring Benin. Those who suffer are mainly small-scale farmers and traders.

Rainy season in Nigeria. A mud battle rages at the Arena Market in Lagos’ Oshodi district, a vast former military base. People jump the puddles, or balance on stones and along boards to get across. This is the only way to keep their feet more or less dry when they go to one of the countless stalls where traders are advertising their vegetables, spices, household goods and meat at the tops of their voices. Asinuju Iaybo, a market trader, stands solid as a rock in the hustle and bustle, her arms folded. Her hens are clucking away in the cages behind her. “The rain is the least of our problems, it’s the frozen chicken that is much worse.” She wipes some raindrops from her face with her hand. “They sell birds from England and Spain over there,” she says, pointing to one of the many long red-brick barracks in the marketplace. A whole chicken for only a thousand naira, equivalent to 2.50 euros. “I pay that much to buy them from the farm out in the country, then I have transport costs and rent for the stall on top.” So a chicken from her costs at least 1,200 naira, and that is for a hen that has finished laying. The little free-range chickens in the next cage cost the customers an extra hundred naira. “But for that you get a really tasty bird”, says Asinuju Iaybo, with a broad grin.

What’s left of the chicken ...

That doesn’t do the trick, though. Nigeria’s economy has slumped, owing to the falling price of oil. Many people are choosing cheap imported chickens, especially as these can be bought as portions for the equivalent of barely one euro per kilogramme.

Farmers in the EU, Brazil and the USA are more than happy with a price that saves them the cost of disposing of their surpluses. Their markets of choice demand mainly breast meat and perhaps legs as well, but what about the rest?

That is why wings, giblets and other parts end up in West Africa. Once they are unloaded from the ship in West Africa, there is no question of a cold chain any more. The goods are driven by van or car over bumpy country roads in tropical temperatures, then sit unrefrigerated on market stalls or in antiquated freezer cabinets that have to contend with daily power failures. Salmonella and other bacteria multiply as a result. There is also contamination with formaldehyde, a solution of which is used as a disinfectant and preservative, and with antibiotics.

“The government must do more to tackle imports of frozen meat.” Asinuju Iaybo’s eyes narrow angrily. She is now sitting on a small wooden bench next to the cages, a wad of tattered banknotes in her hand. The elder of her two daughters hands her some notes and asks for change. A customer has bought two chickens, and now stands waiting somewhat impatiently in the mud by the stall in her black patent shoes and neatly pressed business suit. “I always buy live chickens”, says this woman, who runs a guesthouse. “Although they cost more than frozen birds, they are fresh and safe.”

Asinuju Iaybo’s chicken business at the Arena Market provides almost half the family income. Her husband is a self-employed engineer. “My business lets us eat well, and I can afford clothes and school fees for the children.” However, she sees this increasingly under threat: “Imported frozen chicken is ruining our business.” It is the same for Lateef Jimoh. Just a few yards away he and his colleagues slaughter the chickens after they are bought, then scald and pluck them. For each chicken he earns the equivalent of 30 eurocents. “On good market days I used to slaughter fifty birds; now it’s often only twenty or thirty. The frozen ones are already dead and plucked, of course.”

There is actually an import ban on chicken in place in Nigeria. It was issued back in 2003 by the then president Olusegun Obasanjo, who is reputed to be one of the largest poultry farmers in West Africa. His successors have strengthened the ban several times and extended it to other agricultural products, most recently in June 2015.

How little that helps is shown by a walk through Ijora Market on the mainland close to Lagos Island. Huddling in the shadow of a huge concrete viaduct – a Chinese company is in the process of building the city’s first Metro – we find low shelters in which long lines of old freezers sit humming away. Ijora Market offers frozen food at bargain prices. The traders work on rough wooden tables, chopping frozen meat, fish and blocks of shrimps into the portions required. When we ask for imported chicken, one of the traders heaves three boxes of frozen chicken legs onto the table. The countries of origin – USA, Brazil and the United Kingdom – are visible on the sodden packaging. Some of the legs are already beginning to thaw. We enquire whether he can get French or German chicken. “No problem, just give me a while.” He trades openly. He has a cold store in neighbouring Benin, only an hour and a half’s drive from Lagos, where it is legal to import meat. Business partners in the various countries of origin send him the frozen goods via the port of Cotonou. Every day the trader or one of his brothers crosses the border to fetch the goods for their stall at Ijora Market. They simply slip a few notes to the customs officer.

According to the Nigerian poultry association, meat to the value of three billion dollars is smuggled into the country like this every year. Around a million jobs could be created in the feedstuffs industry, on farms and in other occupations along the value chain, if the estimated 1.2 million tonnes of poultry imported illegally were produced in the country. But that is nowhere near happening in Nigeria.

West Africa’s Economic Partnership Agreement (EPA) with the European Union will not exactly improve the situation. Ghana recently ratified this trade agreement, as one of the last West African countries to do so. Critics fear that it will bring even more subsidised agricultural imports into the region. Although Nigeria has so far refused to sign the free trade agreement, this refusal and the import ban will have little effect as long as the goods are smuggled in from neighbouring countries.

The authorities – powerless or unwilling?

So why isn’t the smuggling prevented? The chief officer of the customs authority in one border province is only prepared to talk off the record, but still. He offers wholehearted assurances that the border authority is doing everything in its power to end the smuggling. To prove this, he lays out colour photos of battered vans on his large desk. Inside the vans are piles of sodden cardboard boxes, like the ones we saw at Ijora Market. However, he himself admits that his men only rarely get a haul like this.

The long border with Benin is too porous and difficult to control, he says, plus the smugglers are crafty, and there are too many of them. The Nigerian border authority is engaging in publicity stunts in an attempt at reassurance. For example, one unit recently discovered a lorry containing 1,600 boxes of smuggled poultry outside Ibadan in Oyo state, one of the largest cities in the country with a population of around 5.5 million. The load was incinerated in the presence of local journalists.

“That’s pointless. Smuggled poultry is sold everywhere in our markets without the police or customs intervening”, says Victor Olowe. The harm being done to the members of his Farmers Development Union (FADU) is considerable, continues the director of the Ibadan-based organisation. Ibadan liegt im Bundesstaat Oyo, the main centre for poultry rearing in Nigeria. It is also where Asinuju Iaybo buys the hens for her stall at the Arena Market in Lagos. Of the 500,000 members of FADU a fifth keep hens, for eggs and to produce meat. The organisation finds them customers, provides microcredit and arranges courses on animal health, hygiene and book-keeping. In this way it tries to make up for the lack of support for the farmers from the government of their own country.

One of these farmers is Joshua Olajide Olufeme from Shukuru, a village an hour and a half’s drive from Ibadan. The farmer is sitting outside his little stone cottage. The clucking of his choir of 850 hens drifts across from the run that he has built from bricks, battens and chicken wire. The minibus in which Olufeme delivers his produce – eggs, meat, cassava, maize, bananas, citrus fruits and his palm oil crop – is parked next to the chicken run. The family of six can live quite well from the farm. Poultry farming has provided half their earnings for twenty years. Sales of eggs bring in a regular income. On Christian and Muslim feast days the meat from hens past laying and a few broilers provides the farmer with extra funds for investment and other more major expenses. Recently, however, soaring feed prices have swallowed up all the profit from poultry rearing. Furthermore, he has increasingly to compete with factory farms. Some of these farms, owned by Nigerian and Lebanese investors, use the latest technology such as light manipulation to stimulate growth. This means they can supply retailers like the supermarket chains in the country at very favourable rates.

The fact that people are choosing to buy smuggled chicken even more often on account of the recession could mean the end of small-scale farmers like Joshua Olajide Olufeme. “I may soon have to give up poultry farming”, he says, gazing thoughtfully round his farm. For a brief moment the sun breaks through the rain clouds. It will start raining again any minute. But the rain is the least of Joshua Olajide Olufeme’s problems.