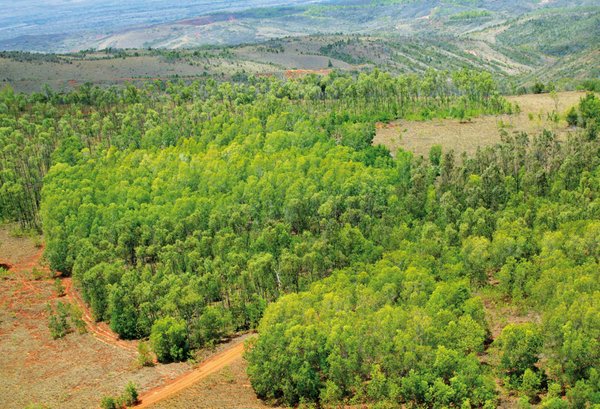 Newly created plantations ease the pressure on natural forests. Using the RVI approach has allowed 49,000 hectares of forests to be preserved.
Photo: GIZ/ECO

German Development Cooperation has developed an approach for the sustainable production of charcoal that has proved to have a considerable impact in Northern Madagascar. Since both environmental and socioeconomic aspects are addressed in a very effective way, this approach has high potential referring to global challenges such as land degradation, rural poverty and climate change.

In sub-Saharan Africa, wood-fuels have always been the most important energy carrier, including in urban centres where charcoal is chiefly used for cooking. Even in a middle- and long-term perspective, wood energy and charcoal will remain the major energy source for most African countries. Already today, more than half of the world-wide charcoal production, about 24,000,000 tons, is consumed in Africa. Between 1992 and 2007, the production of charcoal in Africa grew by 65 per cent, a trend expected to continue in line with population growth. Only about 10 per cent of the population have access to modern energies like electricity and gas.

Dry forest ecosystems (with up to 1,500 mm precipitation per year) supply about 80 per cent of the energy needed by the rural and urban population in sub-Saharan Africa. Such forests are hardly ever subject to regulated and sustainable management, resulting in overexploitation and degradation. Around urban centres in particular, degradation and deforestation progress in a concentric fashion, with desertification as the inevitable end-result. Due to the dry forests’ low increment rates, charcoal production tends to destroy this vulnerable ecosystem. Moreover, conversion of forests to farmland and mounting degradation further impair the dry forests’ potential to supply wood. Weak forest governance, commonly regarded as the biggest obstacle to sustainable forest management in sub-Saharan Africa, likewise restricts wood energy supplies (of charcoal in particular) from natural forests.

Natural forests aside, wood energy originates from various sources such as trees outside of forests, agroforestry, agricultural plantations and tree plantations. Considering the huge and increasing demand for energy wood and the decreasing potential of sustainable production in natural forests (especially around urban centres), it becomes clear that this mix of energy wood sources needs to prioritise more productive sources. Consequently, Deutsche Gesell­schaft für Internationale Zusammenarbeit (GIZ) GmbH pioneered an approach in Northern Madagascar to boost sustainable charcoal production through wood plantations. Its main features are presented in the following.

The case of Northern Madagascar

Over the last two decades, progressive deforestation at a rate of 0.6 per cent per year and subsequent erosion has already stripped Madagascar of many of its fertile soils, directly affecting the country’s population of 20 million, especially in rural areas. Creating a vicious circle, loss of soil fertility has driven many small/subsistence farmers into charcoal production. Primary forests, secondary forests and savannah are used, often illegally, as a freely accessible resource. Eighty-five per cent of all Madagascan households depend on woodfuel. Population growth and urbanisation further increase the demand for charcoal. Yet, despite its significance and potential (as illustrated by an annual turn-over of about 125 million euro), national policies tend to almost entirely omit charcoal. This further fuels unsustainable and inefficient production, and, by extension, deforestation and soil degradation. Eventually, opportunities to modernise the charcoal value chain are lost, and government revenue is foregone – not to mention the longer term loss of wood-fuel supplies.

Private tenure as the basis of the value chain approach

Unlike community forest management, the RVI approach (Reboisement Villageois Individuel) prioritises individual smallholders as forest stewards with secure tenure rights. At its core, surplus/freely disposable wasteland unsuitable for other purposes is to be reforested with the goal of producing wood-fuel in a sustainable and highly efficient manner. To realise this goal, the project

Mechanical soil preparation along contour lines serves to break up top-soil compaction and increases water infiltration, making tree growth more resilient to climate change. Investment per hectare amounts to about 210 euro, 66 per cent of which is covered by technical assistance, with the remainder being provided by plantation owners through their own labour. Furthermore, during the exploitation phase the charcoal producers are instructed to operate more efficient charcoal kilns. Networking support helps to create small rural businesses with better market outreach and easier proof of origin of sustainably produced fuel (“Green charcoal chain”). NGOs have been specially qualified by the project to train and advise the small farming households in the implementation of the approach.

The RVI approach thus addresses the full value chain, from the sustainable production of wood-based fuels to their processing, conversion, distribution and marketing, all the way to end-consumers and related technology such as improved kilns and stoves. A comprehensive GIS-based monitoring has been set up to monitor selected indicators along the marketing chain of forest products and compiled to an “atlas”. In addition, livelihood indicators on the level of the target groups are periodically assessed and integrated.

The RVI approach is not only pro-poor, pro-development and a potential driver of sustainable economic growth (green economy), but also highly valuable in mitigating biodiversity loss and climate change. Unlike other community based forest management approaches, RVI relieves governments of the need for organisational and governance interventions, yet retains many of the same environmental benefits. Once the plantations are established, the process of managing, harvesting, and replanting is self-sustaining through wood sales revenues.

Environment. Overall, 2,900 households have so far afforested 7,000 hectares of wasteland around 68 villages, mainly using eucalyptus. Since mechanical tillage is mandated by the approach, degraded areas with compacted top-soils can be valorised through rehabilitation. Newly created plantations ease the pressure on natural forests, especially around protected areas under threat of conversion for charcoal production (biodiversity conservation as a co-benefit). Additionally, bush fires in the afforestation zones decrease, since the owners of the forest plots have a strong interest in protecting their property. Coupled with efficient technologies, this has resulted in the preservation of about 49,000 hectares of natural forests, with corresponding carbon sequestration.

Poverty alleviation. Small farmer households participating in the RVI own up to three hectares of energy forest, enabling them to produce about 2.9 tons of charcoal a year for at least 27 years without any additional investment. This results in a doubling of their annual income compared to the rural average. For many people, the increase will be significantly higher, since about 30 per cent of farming households belong to the poorest landless section of the population. RVI also gives women greater opportunities to own forest plots (current share 33 %) and thus strengthens their economic position in society. The 7,000 urban households (roughly equivalent to 33,000 people) using improved stoves save some 733 tons of charcoal a year, worth a total of 101,000 euro or 14 euro per household (which corresponds to an 18 per cent drop in expenditure).

Energy supply. Of the total afforested area of 7,000 hectares, 800 hectares can be logged each year. This, combined with the efficient utilisation technologies, enables production of a total of 3,500 tons of charcoal, meaning that, particularly in the regional capital of Antsiranana, about 33,000 people (30 % of the town’s population) can be sustainably supplied with domestic energy.

Local capacity development. Local service providers (e.g. NGOs and small private businesses) are increasingly capable of providing professional advice and continuous support to the relevant target groups. Most of the initial participants have by now attained sufficient skills to carry out the afforestation work independently. Village-level networking has the concerned stakeholders’ decision-making rights at the local level, particularly on important issues such as land use planning. For some municipalities, regulated charcoal production has turned into a source of tax revenue.

Even though some headway has been made in providing alternative energy sources, wood energy will remain centre-stage in sub-Saharan Africa. Within the wood energy segment, diversification of sources is essential in order to reduce pressure on natural forests, especially in regard to charcoal production. Therefore, existing and proven good practices such as the RVI approach from Madagascar warrant wider dissemination with a view to achieving large-scale impact. For this reason German Development Cooperation is currently assessing the feasibility of expanding this approach to other African countries. Wood-fuel plantations are also a very promising way of rehabilitating and valorising land that has already been degraded. Furthermore, they provide sustainable income for the rural population which, in consequence, is much less affected by extreme weather events threatening annual crops. In this context, the RVI approach was presented at a side event of the UNCCD COP 11, in September 2013, in Namibia that explored innovative approaches to combat land degradation and strengthen the resilience of rural people through sustainable wood energy production. It has been agreed that planted forests for wood energy have an undeveloped potential to contribute to these targets.

Success factors at a glance