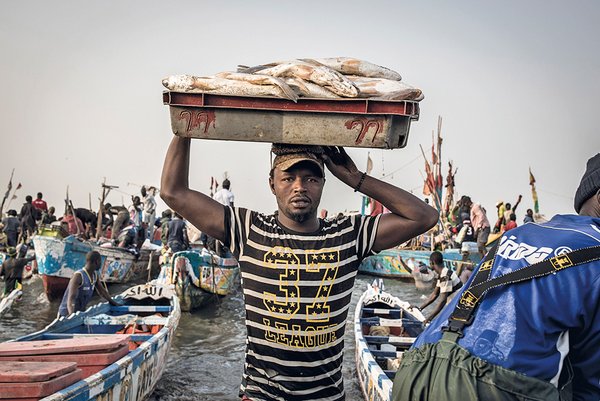 The CADDP 10 per cent target – still pursued by African leaders?

The 2003 Maputo Declaration aimed at boosting African agriculture requires governments to make difficult decisions on budget priorities. Furthermore, tracking the progress of the initiative presents problems. Our author looks at these and other challenges the Maputo Declaration is facing. And against the background of a continuing decline in government expenditure on agriculture on the continent, he argues that new evidence on expenditure outcomes is required to get governments to reverse the trend.

In 2003 at the African Union (AU) Summit held in Maputo, Mozambique, the heads of state and government pledged to invest ten per cent of the annual national budget in agriculture. This initiative, popularly referred to as the Maputo Declaration, is the main instrument that the leaders put in place when launching the Comprehensive Africa Agriculture Development Programme (CAADP) to achieve an annual agricultural growth rate of six per cent. The ten per cent government expenditure pledge for agricultural development in pursuit of a six per cent annual agricultural growth rate has remained over time and been the foundation of successive AU declarations on agriculture-led development such as the 2014 Malabo Declaration on accelerated agricultural growth and transformation for shared prosperity and improved livelihoods.

In most parts of Africa, agriculture is the primary economic activity of the major share of the labour force and provides substantial foreign exchange to governments through raw material exports. Also, most of the poor, food insecure and malnourished people live in rural areas and depend on agriculture for their livelihoods. So increasing the share of the national budget allocated to agriculture seems worthy to drive economic growth, generate more income for the government, raise incomes of farmers, and reduce poverty and food insecurity in rural areas. However, since the allocation of the national budget to different sectors of the economy is a zero-sum game, the question arises which sectors’ budget to cut to increase the share allocated to agriculture? Cutting the budget of a sector contributing more to the above objectives than agriculture does not make economic sense.

Thus, obtaining evidence on the relative contribution of the government’s expenditure on different sectors to the various development objectives that it is seeking to achieve is a major challenge to making such decisions. There are political factors to consider as well. For example, African leaders have also signed on to various AU charters demanding hefty shares of the national budget for other sectors, including the “Abuja Declaration on HIV/AIDS, Tuberculosis and Other Related Infectious Diseases”, calling for 15 per cent of the national budget to be spent on the health sector, and the “Nairobi Declaration and Call for Action on Education”, seeking at least 15 to 20 per cent of total public expenditure for education. Therefore, convincing policy-makers to increase the share of the national budget allocated to agriculture will also depend on political economy factors such as the incentives and constraints of the actors (politicians, bureaucrats, interest groups, donors, etc.) lobbying for agriculture or the Maputo Declaration versus those lobbying for other sectors or declarations.

Tracking implementation of the pledge is problematic

The types of government expenditure to count as part of the ten per cent have continuously been debated. In 2005, the AU published a Guidance Note that recommends using an “enhanced COFOG” (Classification of the Functions of Government) definition of the indicator to track implementation of the pledge. This is made up of three components: (1) expenditures associated with the administration, construction, operation or support activities, compensation, grants or subsidies for crops, livestock, forestry, and fishing and hunting; (2) expenditures associated with research and development on crops, livestock, forestry, and fishing and hunting; and (3) expenditures associated with other functions contributing directly to increased agricultural development, such as food and nutrition security, feeder roads, rural land administration, natural resource management, climate change adaptation, multi-purpose development projects with agricultural benefits, mandated public functions of state corporations, agriculture marketing, capacity development, subnational expenditures, information and communications technology, and rural electrification. The third component, in addition to the recommendation to count expenditures of both government units and state-owned enterprises (SOEs), which together constitute the enhanced expenditure idea, has generated controversy because it includes expenditures on non-traditional agricultural functions and expenditures of non-governmental units.

The results of using the enhanced definition tend to mask the often low and declining trend of government expenditures on critical agricultural functions such as research, irrigation, extension and other high productive investments. As it is these negative trends that motivated the Maputo Declaration, the rationale for using the enhanced COFOG definition seems counterintuitive.

In the Government Finance Statistics (GFS) manual presenting the international standards for compiling and presenting fiscal statistics, expenditures in the third component of the “enhanced COFOG” definition are already captured under other functions of the government, such as transport, communication, energy, environmental protection, community development, education and social protection. Since the AU Guidance Note does not provide any measure of apportioning such expenditures for agriculture, different countries have used different methods, which affects cross-country and intertemporal analysis of government agriculture expenditures and tracking implementation of the pledge.

The GFS manual is also clear about the issue of governmental versus non-governmental units or the entities whose expenditures to count. Units must assume responsibility for providing goods and services to the community or individual households primarily on a non-market basis, redistribute income and wealth through transfers, engage primarily in non-market or not-for-profit production and finance their activities primarily out of taxation or other compulsory transfers. Thus, although SOEs may be mandated to perform some public functions, the majority of them do not qualify as governmental units and so their expenditures may not be included as part of government agriculture expenditure. Most SOEs provide market goods and services at economically significant prices to finance their activities. From a practical perspective as well, the financial management and expenditure determination processes of such SOEs differ from those of the government units (e.g. ministries, departments and agencies) that own or control them, and there is no way of reallocating expenditures across SOEs. For SOEs or other public boards and corporations whose expenditures qualify as government expenditure, they are already captured in the consolidated government accounts as grants, subsidies or subventions that the government gives to them.

Therefore, it seems the rationale for recommending use of the “enhanced COFOG” definition is to help show that governments were already spending more on the sector and the ten per cent pledge is, or is close to, being achieved. This is like raising the high-jump crossbar at the Olympics to set a higher record and simultaneously placing a springboard for the athletes to use to jump over it.

The ten per cent pledge seems far from being achieved

After two decades since the Maputo Declaration was made, very few countries have achieved the ten per cent target, with an average of seven countries succeeding in the pre-CAADP periods compared to five afterwards (see Figure). Five countries (Burkina Faso, Ethiopia, Malawi, Mali and Niger) consistently achieved the target from 1980 to 2020 (i.e. before and after the pledge was made), whereas Benin, Mozambique, Senegal and Sierra Leone are the countries having achieved the target in some years only after the pledge was made. The share of agriculture in total government expenditure for the continent has persistently declined over time from about seven per cent per year on average in the 1980s to less than three per cent per year on average in the last decade. Together, these results suggest that although the continent is far from achieving the pledge, making the pledge may have helped reduce the rate of decline in the average share substantially, compared to the rate of decline especially in the 1990s. 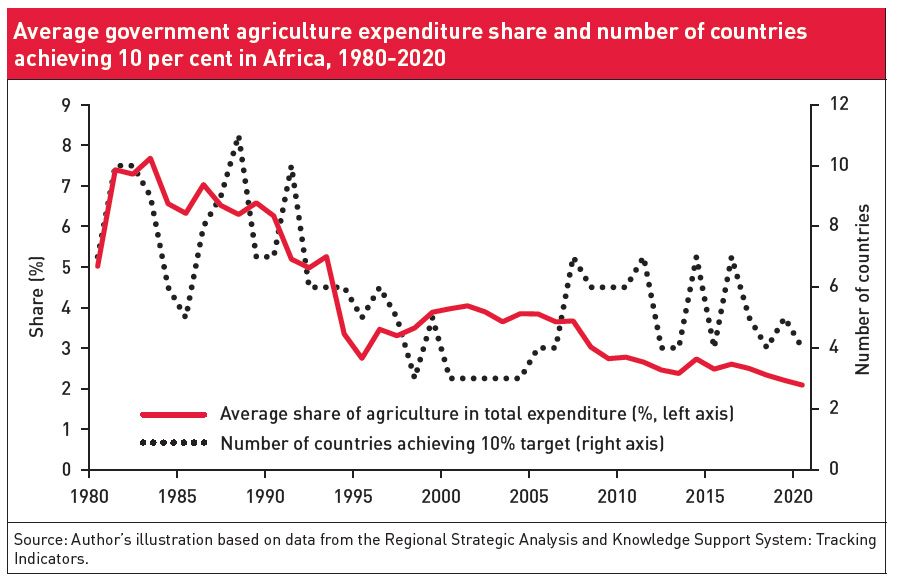 Failure to meet the pledge may not be so worrisome, as the numerical goal of ten per cent seems arbitrary. However, since public agriculture expenditure has high returns in terms of economic growth, and agricultural growth has been more effective in reducing poverty than growth originating from other sectors, the continuous decline in the share of agriculture in total government expenditure share in Africa is indeed of concern. In the last decade (2010–2019) for example, agricultural productivity growth in Africa has been slowest among the developing regions of the world, with about half of the countries in the continent achieving a negative annual average agricultural productivity growth rate. Furthermore, the contribution of agriculture to gross domestic product has remained about 15 per cent on average for the continent since the 1980s, whereas in addition to providing food security, the sector is expected to address malnutrition, reduce poverty and build resilience among other outcomes, while dealing with challenges like climate change, degrading natural resources, and widespread pests and diseases (see e.g. the Malabo Declaration).

Making a case to convince policy-makers to increase the share of the national budget allocated to agriculture to reverse the declining trend would require stressing these new demands on the sector as well as new evidence on the productivity and outcomes of recent trends in government expenditure on agriculture relative to the other sectors. This is because the trends and composition of public agriculture expenditure associated with the periods (1980–2000) analysed in the studies that are commonly cited in reference to the evidence on the returns to public agriculture spending in Africa are different from recent trends, especially the periods of the Maputo (2003–2015) and Malabo (2014–2025) Declarations.

The AU Guidance Note – On Tracking and Measuring the Levels and Quality of Government Expenditures for Agriculture.
https://www.nepad.org/caadp/publication/au-guidance-note-tracking-and-measuring-levels-and-quality-of-government

Nairobi Declaration and Call for Action on Education. Bridging continental and global education frameworks for the Africa We Want.
http://fawe.org/wp-content/uploads/2018/05/PACE-2018_Nairobi-Declaration_draft.pdf