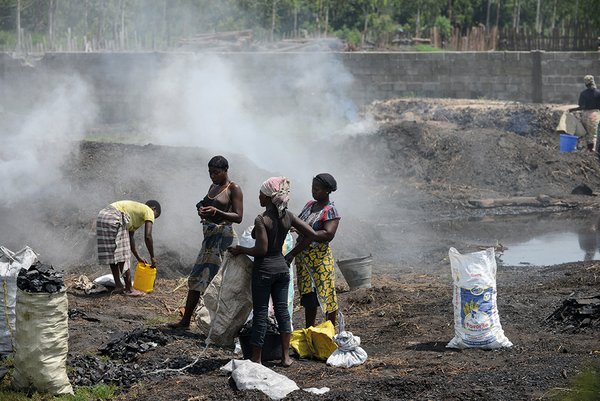 The Beira Development Corridor – an upswing or a sell-out?

For decades, the Mozambican port city of Beira was desolate. The civil war and a failed economy left deep wounds. But now a consortium of the government and corporations is promising a new start. The Beira Development Corridor is to bring affluence to the people living in the region. However, smallholders fear for their land.

It is meant to be nothing less than a revolution. For a city in ruins and a region that is desolated. Up to the 1970s, Beira, lying on the east coast of Mozambique, had been a paradise for rich Portuguese and white farmers from the neighbouring country of what is now Zimbabwe, who used to spend their holidays there. The gigantic Grand Hotel bears testimony to this period – but also to its decline. Today, it accommodates up to 3,000 people. The building has turned into a slum, with children playing in the puddles, rubbish piling up in the lift shafts, and men hanging around waiting for better times – which are now, at last, supposed to be just around the corner. For the region has been designated as one of six so-called Development Corridors by the Mozambican government.

In 2010, Mozambique joined up with a consortium of private investors, international agricultural corporations and donors such as the World Bank in order to step up the development of industrial agriculture. There is certainly enough space available. The Beira Corridor has roughly the same area as Great Britain. From Beira, it leads westwards towards the city of Chimoio. Carrying on straight ahead, you reach Zimbabwe at some point, and turning off to the right, heading northwards, you would get to Malawi and Zambia.

“It is the gateway to Southeast Africa,” an official image brochure called “Delivering the Potential” tells us. And: “It is also a large area with huge agricultural potential. In Mozambique alone there are ten million hectares of arable land with good soils, climate and access to water. But this potential has not been realised.”

Now this is to change – with commercial agriculture on a grand scale. New cultivating methods, different seed and better fertiliser. But how realistic are these plans? Fears are already growing that at the end of the day, it will once again only be the foreigners who are making a profit, leaving nothing for the locals.

There is dense traffic on the relatively new roads, which are used mostly by lorries carrying valuable logs. Their drivers are Chinese. “While the Chinese take the timber, our children must sit on the floor because they haven’t even got tables and chairs,” says Richard Ujwigowa, describing the ordeal that Mozambique is facing. Born in Congo, Ujwigowa belongs to the Catholic community of African missionaries and is a member of the Catholic Commission for Peace and Justice in Mozambique. Almost every day, people tell him what is happening to them, their villages and their land. “Company representatives come to the village and present documents they have received from the government in Maputo or from the district authorities,” says Ujwigowa. And with little presents, they persuade the village chieftains to hand over their land to them. “One was pressured by loggers. They gave him a motorbike and new clothes for his wife. Then he approved.” The Church tries to inform the people, to explain to them what their rights are and what losing their land could mean for them. But this isn’t easy. For they don’t all have the same view on the matter. Younger people in particular say: “Surely it’s good to have something new. Or do you want to carry on slogging away in the fields with your bare hands and our old tools forever?”

One of the driving forces behind the Beira Corridor is the fertiliser manufacturer Yara, from Norway. Seeking new markets for its products, the company is campaigning for “partnership with agriculture and food companies” and intends to “embrace subsistence farmers rather than exclude them”, as a paper commissioned by Yara announces. This approach, supported by almost 30 countries across the world and by government donors from Norway, Brazil, Japan, the USA and the United Kingdom and financed by the World Bank, is said to be “unusual, but potentially revolutionary”.

Investments are planned for a total of 150 new large-scale farms up to 2030, the Investment Blueprint (2010 – 2030) states. Sugar cane is to be grown on 10,000 hectares of the land and rice on 3,000 hectares. And then reference is made to medium-size farms producing bananas, citrus fruits and mangos or grain such as wheat, soy and maize. A further 3,000 hectares has been earmarked for livestock (cattle and chickens). By 2030, the Beira Corridor “establishes Mozambique and the wider region as a major breadbasket”, the vision suggests. And it is stressed again and again that the smallholders are to benefit from these plans as well: for example through better seed, better irrigation for their fields, and new marketing options. However, a number of projects have already failed. For example the plantations in Mozambique that are supposed to supply renewable raw materials for biofuel. Close to Chimoio, long rows of fields with green bushes stretch across the landscape. About ten years ago, Jatropha was seen as a wonder plant, or at least as a serious alternative to the planet’s dwindling mineral oil reserves. The oil-bearing nut was meant to yield fuel, and even companies like Deutsche Lufthansa took part in the scheme. Around 2,000 hectares of Jatropha was planted in the Chimoio region. The UK’s SunBiofuels made use of fallow tobacco and cotton fields dating back to colonial days. And now the bushes are standing there, just like the old colonial villa and the swimming-pool that the Portuguese plantation founder used to bathe in. Two guards keep an eye on the site. In 2011, SunBiofuels filed for bankruptcy. The Chimoio Jatropha project, which so many had placed their hopes on, had failed. “This is what the people here don’t understand,” says missionary Ujwigowa. “That plants are grown purely for exports, such as Jatropha, sugar cane or eucalyptus, whereas it is food that they are in need of most of all.”

Smallholder Anoria Vurande lives next to one of the abandoned plantations. “We have heard that white men are now coming again, with a new project,” she says. First her father and other people from her village grew tobacco for the Portuguese. Then they planted Jatropha. “Now it is supposed to be maize,” Ms Vurande explains, digging over a small maize field in between the fallow shrubs. Her twelve-year-old daughter is helping her. She lets the maize corns fall to the ground and covers them with the deep-brown soil. “There they are,” she says, pointing to a lorry. “They’re workers staking out routes for new roads.” This has roused excitement among the villagers. “They’re saying that a plantation will be coming and that we’ll have to hand over our land. But we have protested against this,” says Ms Vurande. The authorities seem to have backed down. “They’ve promised us that there will be a meeting at which the land is to be distributed among us all.” But will this really happen? Ms Vurande just shrugs.

The Beira Corridor does indeed offer great prospects for those with an entrepreneurial spirit, good education and, above all, some seed capital. A number of companies can boast success, like poultry breeder Abilio Antunes. At the chicken farm close to Chimoio, the junior manager welcomes his visitors: “We slaughter 100,000 chickens a day and supply markets throughout the country.” Alone the abattoir employs 100 men, and the chicken pens and battery cages provide further jobs.

Evening shadows are lengthening in Chimoio. The bulky lorries are still racing each other on the way to Beira. They will get to the port in three hours’ time, loaded with timber from the forests that is destined for China, copper from the mines of Zambia, and oil and petrol from the refineries. In the city, smartly dressed people are shopping at Shoprite, a supermarket chain from South Africa. Abilio Antunes’ deep-freeze chickens are on sale here too. While the customers are loading their stuffed plastic bags into their cars, a few older women in front of the market are still waiting for people to buy their small bananas with brown spots, grown in their own gardens. One woman is stooping over a little fire. She has heated up a bowl of oil and is frying something for dinner. They are chicken heads that have just been defrozen – the rest of what the others’ new affluence has left over for her.