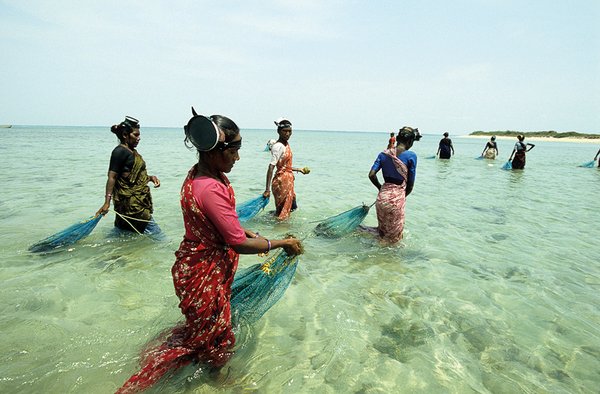 Small-scale fishers and aquaculture communities, including poor and marginalised people, are often in tension with large corporations and production units over access to fish and fish-related employment.
Photo: J. Boethling

Fishery plays a crucial role in poverty and hunger alleviation. It is therefore all the more important to secure the long-term conservation of fish stocks as a natural resource and to ensure fair access to them.

Our oceans cover 71 per cent of the Earth’s surface. Their importance and their resources are enormous regarding food security and protection of livelihoods of the further increasing global population. It is estimated that fisheries and aquaculture are the basis of the livelihoods for 660 to 820 million people (fishers, fish farmers, fish traders, workers in fish-processing factories, and their families), representing ten to twelve per cent of the world’s population. Ninety per cent of these people are employed by capture fisheries operating on a small scale in developing countries. Nearly half of the 120 million people who work in the capture fisheries sector and its supply chains are women.

Fish has unique nutritional properties which make it essential to the health of billions of consumers in both developed and developing countries. Worldwide, annual fish per capita consumption tripled from 6 kg in 1950 to 18.8 kg in 2011. Rising economic wealth and health consciousness have contributed to this tangibly increasing demand. Today, almost every fish caught by small-scale fisheries and about 80 per cent of the industrial fleets’ landings is for human consumption. The aquaculture sector also makes a significant contribution to meeting the demand.

However, there are still inequalities in who eats the fish and who benefits from the value chains. Small-scale fishers and aquaculture communities, including poor and marginalised people, are often in tension with large corporations and production units over access to fish and fish-related employment. Thus we have to ask ourselves how we can achieve sustainably managed fisheries that benefit all of us.

At the same time, scientific data confirms the critical status of global fish stocks. Apart from over-fishing, illegal, unreported and unregulated fisheries (IUU) is one major factor that contributes to jeopardising effective and efficient fish supply for human consumption. It leads to loss of revenues, employment and fish supply for local populations. In addition, the value chains of international fisheries call for improvements as by-catch and post-landing losses are significant. To this end, we collaborate closely with the private sector for the certification of wild catch and aquaculture produce.

Factors such as environmental pollution, littering, increasing extraction of raw materials from the seabed, destruction of marine habitats and biodiversity, natural disasters and climate change have an impact on fish stocks and the state of our oceans. The policy of the German Federal Ministry for Economic Cooperation and Development (BMZ) is designed to meet these challenges. We are reinforcing our efforts to better protect and sustainably manage the marine environment. Experiences made, for example in the framework of the European Union’s fishery partnership agreements, must be up-scaled to other partner countries, in particular the developing ones. We are supporting these countries in achieving responsible and sustainable fisheries development.

In the “One World – No Hunger” initiative, launched by the BMZ last year (see also Rural 21, No 1/2015), fish is strategically integrated to reduce hunger and malnutrition in our developing partner countries as well as to ascertain livelihoods for millions of families, including women and minority groups. Together with our international and national partners, German development cooperation is working to improve key issues in the fishery and aquaculture sector in the following areas: (i) combating IUU; (ii) improving value chains; (iii) reducing fish meal and fish oil production from wild catch; (iv) supporting small-scale fisheries through the application of the Food and Agriculture Organization (FAO) Code of Conduct for Responsible Fisheries and the Voluntary Guidelines for Sustainable Small-Scale Fisheries; (v) supporting cross-country fishery agreements for a joint and efficient governance of fish stocks and their exploitation; (vi) promoting sustainable aquaculture; (vii) certifying of capture fisheries and aquaculture produce, and (viii) respecting human rights and social standards in the fisheries sector.

Our goal is to eradicate hunger and malnutrition and to put in place a basis for making sure that future generations of a growing world population will be able to feed themselves. Therefore, the BMZ welcomes the focus of the current Rural 21 issue as sustainably managed fisheries contribute significantly to reaching this goal.