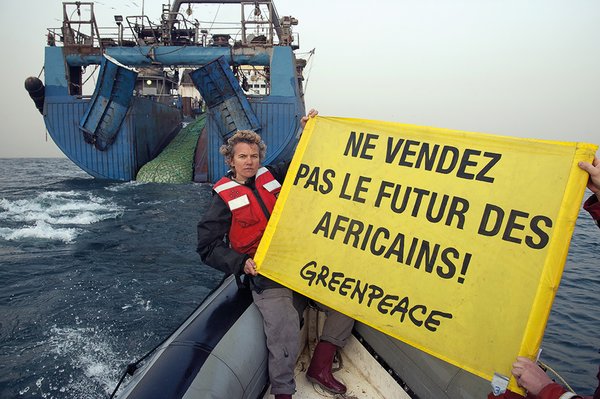 Sustainable management of fisheries and aquaculture: a huge challenge for development cooperation

The global demand for fish and fish products is continuously increasing. However, fisheries management is still insufficient, leading to over-exploitation, illegal fishing and massive post-harvest losses. Our authors describe what has to be done.

Globally, 158 million tonnes of fish was produced in 2012: 11.6 from inland fisheries, 79.7 from marine capture fisheries, 41.9 from inland aquaculture and 24.7 from marine aquaculture. From these landings, 136 million tonnes was used for human consumption. This amount, however, does not represent all global catches. The UN Food and Agriculture Organization (FAO) only receives information of an estimated 70 per cent of all commercially targeted fish stocks. Catches of small-scale fisheries are often underestimated or not included in national fishery statistics.

Fishes are among the most efficient converters of feed into high quality food. Their carbon footprint is low compared to that of other animals that we eat. More than 1.5 billion people cover about 20 per cent, and another three billion people 15 per cent of their daily per capita protein consumption from fish. In 2010, fish as a protein source was twice as important as poultry and three times as large as cattle. Fish is directly used for human consumption and indirectly as fishmeal for aquaculture and poultry or livestock feed. Three quarters of all countries where fish represents more than half of daily protein consumption are amongst the poorest countries of the world, with insufficient nutritional supply. However, inadequate handling and processing methods can lead to quality and nutritional loss and, in turn, substantial economic losses. Specific requirements and preservation techniques are needed to preserve the nutritional quality of fish, extend its shelf-life, minimise the activity of bacteria spoilage and avoid losses caused by poor handling.

Pressure is building up on the resource

The FAO estimates that approximately 30 per cent of all fish stocks are over-exploited, while 57 per cent are fully exploited, and only 13 per cent of the stocks are subject to low or moderate fishing pressure. The International Union for Conservation of Nature and Natural Resources (IUCN) has already drawn up a long list of fish and marine species that are threatened or at risk. The World Bank has examined the economic impact of this development. It estimates that poor fisheries management costs roughly 56 billion euro annually. Over the last 30 years, losses in economic potential have amounted to over two trillion euro. Public awareness about facts and figures has triggered a rising expectation to urgently restore fish stocks and sustainable production levels. But this is not an easy task.

Fisheries can be grouped into two main categories: small-scale and industrial fisheries. Compared to small-scale fisheries, characteristics of large-scale industrial fisheries are an increasing ocean area that is fished, reduced labour intensity, increased supply to external and global markets, increased energy consumption and often the use of environmentally unfriendly catch and production methods. In 2010, there were about 4.36 million fishing vessels in the world, 3.23 million vessels (74 %) of which are considered to operate in marine waters and 1.13 million in inland waters. World-wide subsidies of fishing fleets amount to an annual range of about 20 billion euros. Although catches are increasingly smaller due to over-fished and reduced fish stocks, innovative technology leads to fishing vessels progressively equipped with more effective, capital intensive and less environmentally friendly catch methods.

Whereas fish stocks are constantly decreasing, high economic and population pressure and poverty are causing the number of small-scale fishing vessels operating in near shore areas of coastal countries to grow. Although global capture fisheries have remained at a relatively stable level, an increasing number of parties will want a share of this catch in future. This is a clear indicator of progressive over-fishing, i.e. an exploitation that exceeds the maximum sustainable yield (MSY) – the defined natural productivity level of our marine stocks that can be harvested sustainably. Additional signs of overfishing include the decreasing size of targeted fish towards immature individuals. Shifts in species compositions in the fished ecosystems indicate a strong reduction in the biomass and abundance of high-value larger predator species (e.g. sharks, billfish, tunas and groupers) and increases in biomass and abundance of smaller short-lived species (e.g. small pelagic fish and cephalopods).

Illegal, unreported and unregulated fisheries (IUU) – including unauthorised fishing gear and lack of catch documentation – accounts for at least 15 per cent of world catches globally, i.e. roughly 11 to 26 million tonnes of fish per year, or 10 to 23 billion euros in loss of revenues for the coastal countries concerned. IUU contributes to reducing the food supply of coastal countries.

Nearly a third is lost

Fish not worth landing commercially, such as by-catch of non-targeted species, legally undersized, low-quality, partially damaged or spoilt fish, can end up dumped overboard. Global discard rates of the world’s total capture fisheries are estimated at eight per cent, with a lower rate of 3.7 per cent for small-scale fisheries. This equals losses in food supply of 10 to 12 million tons of fish annually.
As a very perishable food, fish is susceptible to high post-harvest losses after landing, either in quantity or quality, due to post-harvest handling during transports, storage, processing, on the way to markets or in markets waiting to be sold. Globally, 27 per cent of landed fish is lost or wasted from landing to consumption. While this is particularly crucial to food security and income in developing countries, waste at consumer level is quite important in rich countries too.

The triumph of aquaculture – and its consequences

Over the past 25 years, the aquaculture sector has grown enormously. Per capita supply from this sector increased from 0.7 kg in 1970 to 7.8 kg in 2006. Aquaculture has increased the availability of fish and contributed to the awareness and consumption of fish products worldwide. It has created a more competitive fish market overall that generally sells its produce at lower prices than wild caught fish, benefiting income generation, food security and nutritional status for aquaculture households, such as reduction in underweight children.

The World Bank and FAO estimate that the demand for aquatic food will continue to rise, and that part of this demand will be supplied by aquaculture, with an estimated 62 per cent of total human aquatic food consumption by 2030. Aquaculture has the potential to make a significant contribution to the increasing demand in most regions of the world. However, the sector (and its aqua-farmers) face great challenges. For example, high-input high-output intensive aquaculture systems (culture of salmonids in raceways and cages) lead to discharge of suspended solids, nutrient and organic enrichment of recipient waters resulting in build-up of anoxic sediments, changes in benthic communities and the eutrophication of lakes. Large-scale shrimp culture has caused physical degradation of coastal habitats, for example mangrove forests, destruction of wetlands and salinisation of agriculture and drinking water supplies. Growth of aquaculture has been accompanied by a rapid increase in the use of antibiotics and antimicrobial agents to overcome shortcomings in sanitary and unhealthy conditions in fish farming. These can be detrimental to the environment and human health.

A multitude of influential factors

More than 90 per cent of all transport world-wide is maritime. Unlike other transportation systems, maritime transport is not taxed and little controlled. Given the globalisation of trade, ensuring cost transparency between all transport systems, including costs of consequences, is crucial. The ‘polluter pays’ principle must be applied for the maritime transport sector in view of its ecological and socio-economic consequences. Climate change causes proven stress factors including sea level rise, acidification, slow-onset changes such as warming and oceanographic changes and storm surges that impact on the marine habitat and fish stocks. The fishery sector is accountable for annual CO2 emissions of 43 to 134 million tonnes. Large-scale industrial fishing vessels and production chains are the main emitters.

Today, we are aware that traditional indicators of the status of fisheries based on annual landings, sizes of fish stocks and fishing fleets are no longer sufficient. They need to be complemented by approaches including access rights to fishery resources, improved governance, including the participation of fisheries and coastal communities, particularly women, locally available technologies, traditional knowledge and social cohesion among user groups. For the successful development of sustainable management mechanisms, it is imperative to reach a balance between the protection of marine life and the vital role that fisheries plays in many economic regions. On behalf of Germany’s Federal Ministry for Economic Cooperation and Development (BMZ) and in close cooperation with national, European and international governmental, civil society and private organisations and partners worldwide, Deutsche Gesellschaft für Internationale Zusammenarbeit (GIZ) has been operating here for many years. In particular, its global project ‘Support to Sustainable Fisheries and Aquaculture’ aims at contributing to improving fisheries and aquaculture governance and management. Our aim is to help safeguard livelihoods, food security and nutrition as well as to support economic growth in the fishery sector by promoting and supporting sustainable, ecosystem based and socially acceptable approaches, methods and solutions.

Who may fish where? – Ownership, access rights and the value of deep sea fishes
Ownership, governance and access rights are crucial factors that determine the sustainable management of our oceans. The Law of the Sea Treaty under the United Nations Convention on the Law of the Sea (UNCLOS), adopted in 1982, established a comprehensive set of rules governing the oceans. It is based on the concept of common heritage of humankind. It introduced the exclusive economic zone (EEZ), also known as the 200 nautical mile (nm) zone. Accordingly, coastal countries have the right to exclusively use an ocean area within 200 nm from their shoreline, including the exploitation of fisheries resources. The Law of the Sea also regulates the protection and conservation of the marine environment, marine scientific exploration, as well as development and transfer of marine technologies. The high sea, however, remains international water and thus property of humankind. Coastal areas are very productive ecosystems. They are rich in nutrients and fish life. Therefore, it is not surprising that more than 90 per cent of the global fisheries take place within the EEZ. In the high sea, only areas that are relatively productive are of economic interest for fisheries. These areas include the waters adjacent to the EEZ of maritime countries (spill-over effects), seamounts and ridges. Here, the groups of interest are commercially high-value target species such as tuna, swordfish and deep sea benthic fishes. Given the nutrient and low-light environment they live in, deep sea fishes grow slowly and have long life cycles. Our knowledge on their stocks and ecology is rather scarce, and the significant exploitation of these fishes thanks to modern technologies could be putting deep sea fishes at risk.