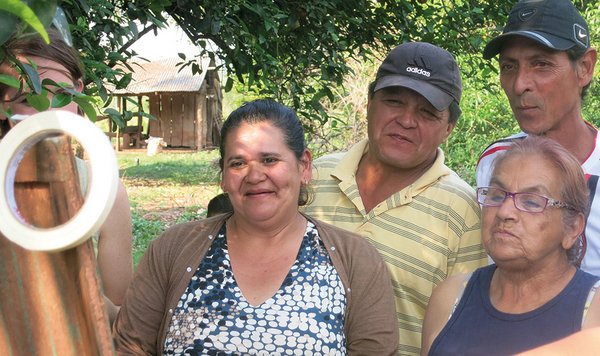 A focus group discussion with members of the farmers committee in Takatalina/San Pedro.
Photo: R. Preissler

Despite years of persistent efforts it has so far proved difficult to establish sustainable systems of land management in Paraguay’s small farmer sector. The reasons for this are shown in a study by the Centre for Rural Development (SLE).

Alongside electricity generation, agriculture is the most important economic sector in Paraguay. The distribution of land ownership is extremely unbalanced, however: family smallholdings of less than 50 hectares represent 91 per cent of all farms but make use of just over 6 per cent of the total arable land area; large-scale farms of over 500 hectares represent 2.6 per cent of all agricultural holdings but work 86 per cent of the cropping area. Concentration of land ownership is still on the increase; cropping and pasture land are being expanded by bringing wastelands under cultivation and clearing forests. Consequently, wind and water erosion are causing progressive soil degradation, which has already resulted in substantial losses of yield. Conservation agriculture (CA) and agroforestry (AF) can counteract the trend and are already being practised on a good two-thirds of large farms, but are barely found in the smallholder sector as yet. Attempts are therefore being made, both by the state and as part of development cooperation, to establish both systems on Paraguayan smallholdings. One example, in progress since 2000, is the project on sustainable resource management – Projecto de Manejo Sostenible de Recursos Naturales (PMRN) – carried out by Deutsche Gesellschaft für Internationale Zusammenarbeit (GIZ).

Despite activities over many years, however, today the adoption rate of both systems remains low and hard to sustain. Effectively, conservation agriculture (see Box on page 37) is often only practised for as long as smallholders receive agricultural advice and inputs (such as green manure seed, herbicides, and tools) at no cost. After the project has run its course, many farms fall back on the traditional management method using the plough.

Similarly, the anticipated multiplication effect, whereby practices are copied by neighbouring smallholder farms, is very low. In the evaluation for the fourth phase of the PMRN project (2014) it is estimated that only 16 per cent of the 9,000 smallholder farms advised are actually practising conservation agriculture. Why the adoption rate by farmers is so low despite the activities of advisory services, and which determinants influence smallholder behaviour were studied in 2014 by a group of students at the Centre for Rural Development (SLE) at Humboldt University, Berlin under commission from GIZ.

The average farm size in the study region is 11 hectares. The average household is also small, numbering between 1 and 5 persons; these farms only have a small workforce of a few family members. 59 per cent of heads of household are over the age of 51.

More than half (58 %) of the 103 smallholder families questioned possess an official land title; the remaining smallholders have used and managed their land for generations on a customary-law basis. The majority of the families surveyed are mainly subsistence producers, but all sell at least a proportion of their agricultural products. Very few of the families questioned earn their income exclusively from agriculture. 23 per cent say that they take out loans, part of which are spent on inputs for agricultural production.

Women make an important contribution within agriculture and to household income in the form of work. On the farms studied, although fewer than 10 per cent of women possess titles to land, they nevertheless take part in decision-making processes; all important decisions are made jointly.

Smallholder farms are always found to be operating several land-use systems side by side. CL and AF generally account for only a small portion of the land: around half of smallholders (52 %) stated that they were practising or had practised conservation agriculture; of these, more than half do so on less than a quarter of their land, using conventional farming practices in parallel on other parts of their land. Agroforestry systems are still far less widespread than conservation agriculture: only one-third of the smallholders surveyed practise agroforestry or have done so in the past.

So how can the poor adoption
of resource-conserving management practices be explained? One of the reasons for the low inclination towards system conversion may be the high average age of the farmers, since older people are less willing than the young to innovate and take risks, as various studies show. In addition, sowing and weed control in particular are more labour-intensive in the conversion phase to conservation agriculture than the traditional method using ploughs. There are not enough family labourers to cover these peaks in labour demand, nor the equipment for mechanisation of this work to make it easier.

Almost all the families studied also have non-agricultural incomes. Consequently possible medium or long-term yield gains resulting from CA or AF are a low priority within overall household budgets. This alleviates the problem pressure, thus reducing the motivation to bring about major changes by means of system conversion.

Despite a great number of references to the contrary in the literature, the possession of title to land is not a major factor in the introduction of new systems in Paraguay. Land tenure certainly appears to be secure enough for smallholders to put innovations into practice. In contrast, it became clear from the surveys that lack of continuity of advisory work was an important reason for the abandonment of systems shortly after introduction. What was more, due to the advisers’ low level of expertise and lack of conviction, advice on AF and CA was not tailored to the context and target group.

Lack of political and institutional embedding

State provision of advice is dominated by the traditional approach of hierarchical (top-down) technology transfer from adviser to smallholder family. One important aspect of the adviser’s role is to supply free inputs like fertilisers, seed, pesticides and other production inputs. All in all, the state advisory service is under-staffed and under-resourced; moreover, it is politically instrumentalised, which is reflected in the lack of continuity of local advisory services. Advisory work fundamentally pays far greater attention to men than to women.

As sustainable production methods, conservation agriculture and agroforestry are a perfect fit with the strategic framework of government advisory work, which incorporates relevant core themes such as improvement of the production base and conservation of the natural resources of soil, water and forest. On closer examination it becomes clear, however, that there are only rather unspecific advisory offers on AF and CA. This is a result of the advisers’ inadequate training, for they receive little or no in-service training on these themes.

As regards the institutional and political embedding of CA and AF, two problem areas can be identified: The strong institutional fragmentation of national agricultural policy actors.

The strong dominance of international donor organisations which do little towards programme harmonisation and so are not advancing the establishment of a Paraguayan rural framework strategy.

Despite the halting pace of diffusion, it became apparent in the studies that the smallholders have positive attitudes towards conservation agriculture and agroforestry. Particularly in the case of CA, perceptions are centred on improved soil fertility, increased soil moisture and long-term reduction of field labour, whereas in AF the production and availability of the resource of wood are of primary interest. For smallholders, however, conservation agriculture in particular is also linked with disadvantageous aspects such as difficulties in making use of green manures (e.g. poor availability, once the advisory service is no longer supplying the requisite seed), widespread scepticism regarding the use of herbicides, or the experience of declining yields of some crops under the system. The fact that many small farmers also earn non-agricultural income evidently means that they are not under any great economic pressure to implement more sustainable land-use systems.

The findings show that despite the positive perceptions and experiences of small farmers overall, the additional benefits accruing from sustainable management systems are not sufficiently great to compensate for the disadvantages and difficulties that are initially associated with their adoption. CA and AF are farming systems geared towards the long term, and their advantages only unfold after several years when they are used properly. This does not tie in with the planning realities of smallholder families, who have to plan and work on a much shorter-term basis.

From the viewpoint of farmers, the real benefit of participating in the programme is to obtain assistance and support by accessing expert advice and financial or material subsidies from the agricultural extension service or other project promoters. From the other viewpoint, the primary concern of the state agricultural extension authority DEAG is top-down delivery of specified advisory content by the adviser. Adjustment to the needs of smallholders and consideration of possible innovations for farm-specific practice and local adaptation are not part of the repertoire in the study region.

The study showed how difficult it is to transfer a land management concept that can be successfully established on large-scale farms with their structural conditions (access to capital, large land holdings, mechanisation, high level of education) into smallholder agriculture, a context with completely different structures (small land holdings, no capital, over-ageing, shortage of labour, lack of mechanisation options). Nevertheless, a series of recommendations for action can be derived on the basis of the study: