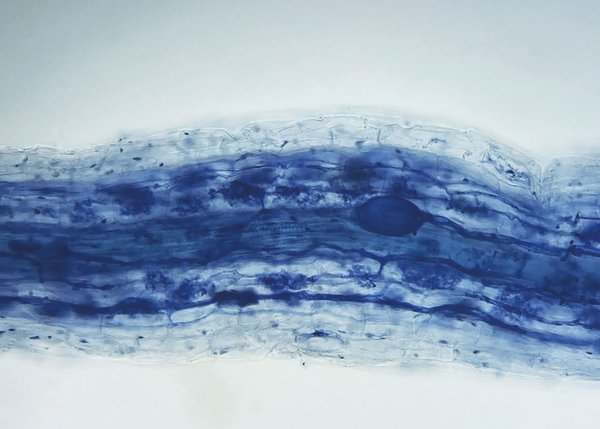 Soils form a thin layer on the Earth’s surface and host an immense biological diversity, most of which is invisible. Yet the organisms living in soil provide crucial ecosystem services that human societies depend on. While intensive agricultural management often poses a threat for soil communities, managed properly, they could strongly and sustainably support yields.

Soils form the basis of human existence and are an integral component for the functioning of our planet Earth. Although people know that there are organisms, such as earthworms, insects, bacteria, protists or fungi, living in soil, they are mostly hidden and the fact that soils are hotspots of biological activity is easily overlooked. It has been estimated that at least one quarter of global biodiversity is found in soils, ranking them among the most important habitats for living organisms. Soil organisms not only live in soil, they are an integral component of the formation and functioning of healthy soils. Without their living components, soils as we know them would not exist; neither would plants be able to grow without the activity of billions of organisms in soil breaking down organic matter, recycling nutrients, improving soil structure or controlling pathogen spread, among other things.

Natural soil ecosystems are almost exclusively maintained by internal resource recycling processes in which soil organisms play a major role. Nutrients contained in plant litter need to be converted into plant-available forms before plants can access them. An underground collaboration between soil animals and the soil microbiome (the entity of microorganisms such as fungi, bacteria and archaea living in a soil) chew up and digest the organic material and release plant available nutrients. Other organisms, like the symbiotic mycorrhizal fungi, can help plants to access and take up these nutrients. Plants can acquire up to 90 per cent of phosphorus and nitrogen from soil microbes. Soil organisms also feed on each other, leading to a constant uptake, transformation and release of nutrients. The soil microbiome emits all kinds of substances and enzymes that can help to improve soil structure, control pathogens and support plants in boosting their own immune systems. They degrade chemical compounds, thereby filtering water and preparing our drinking water. On top of that, soils form the biggest carbon storage on Earth, and soil organisms hold the key to this immense stock. Their activities can lead to C storage through the formation of humus but can also lead to the release of CO2 into the atmosphere when organic matter is decomposed. So soil biological activity can be considered a major determinant of soil C sequestration and the mitigation or aggravation of climate change.

The flipside of intensive agriculture

Soil organisms are controlled by complex ecological networks and shaped by climatic, soil chemical and other environmental conditions. In agriculture, soils are managed to be able to produce high amounts of produce or fibre. Such management operations can also affect soil organisms. Soil tillage can harm larger soil organisms and disrupt fungal hyphae spreading through soil. High nutrient inputs through fertilisers and the use of agrochemicals, such as pesticides, affect soil biological communities and functioning. Crop breeding efforts during the last century focused in huge parts on maximising yields, ignoring belowground processes or the ability of crops to associate with beneficial microbes. Often, monocultures are grown, and, compared to a natural ecosystem, this reduction in plant diversity, together with the addition of agrochemicals, has trickle-down effects on soil biodiversity, which is commonly lower in such systems.

Although the achievements of the Green Revolution have enabled massive increases in food and fibre production and helped to support a strongly increasing human population over the last century, it has become clear that these practices have also promoted the deterioration of soils and their biological resources. Soils are lost at alarming rates through erosion. In addition, external inputs and management processes negatively affected soil biological communities, depriving soils of their inherent potential to sustain plant growth and ecosystem functioning. In industrialised agricultural systems, internal, soil biology-driven ecosystem processes have been systematically replaced by external resource inputs.

Before the Green Revolution, agriculture was much more reliant on soil microbiome processes than industrialised agricultural systems of today. The symbiosis between nitrogen-fixing bacteria and roots of certain plants (Legumes or Fabaceae) or the mycorrhizal symbiosis between beneficial soil fungi and roots of most plant species provided much-needed nutrients for crop production in natural ways. Such plant-soil interactions supported crop production from the beginnings of arable farming and are still part of many traditional and sustainable farming systems of today. As our understanding of belowground ecology and plant-soil interactions increases, new ways of how soil microbiomes support crop production and ecosystem functioning are discovered that can provide the basis for well-informed management recommendations, breeding endeavours and other strategies. Soil biological processes have sustained agricultural production for millennia and there is no reason to believe that this should not be possible again.

The concept of ecological intensification seeks to draw benefits from ecological processes for agricultural production. This concept has been further elaborated to specifically include soil biological processes into agricultural management schemes through the concept of soil ecological engineering, which aims at harnessing the potential of soil biological communities for sustainable agricultural production. This can happen through direct or indirect approaches. The latter comprise creating soil conditions that are beneficial for overall soil biological communities so that their abundance, diversity and activities can be increased.

A high soil biodiversity can have several benefits. Firstly, a high diversity acts as a biological insurance policy. If, for example, increasing temperatures prevent one species from surviving and performing a certain function (e.g. biological pathogen control), diversity increases the chance that another organism able to cope with the changed environmental conditions can step in and perform the respective function. In a less diverse system, such a function might be lost when an organism disappears. Moreover, soils with higher biodiversity can more effectively prevent pathogenic organisms from spreading and establishing themselves in soil. Model studies have shown that reductions in soil biodiversity lead to reduced plant productivity, impaired nutrient cycles and an overall decline in ecosystem functioning.

Different crops have different effects on soil communities. Even within the same crop species, different varieties associate with beneficial soil organisms, such as arbuscular mycorrhizal fungi, to different extents. While breeding efforts have to date focused on yield and disease resistance, breeding for crop associations with beneficial soil organisms is a field that bears huge potential for enhancing agricultural productivity in a sustainable way. Years of intensive agricultural management can lead to reduced abundance or even the extinction of certain soil organisms. By culturing and directly applying beneficial organisms to soil (‘inoculation’), their abundance and benefits can be enhanced or restored.

Trials with arbuscular mycorrhizal fungi have repeatedly shown that crop yields can be increased through inoculations. However, the effects are inconsistent and appear to depend on local conditions. The exact reasons for this context-dependency are a matter of current investigations. Moreover, the market for biological inoculants is still hardly controlled, and some products offered are of poor quality.

Traditional farming systems that have existed long before the onset of the Green Revolution often use agro-ecological principles that harness the potential of soil biology for crop production. Still, scientific advancements, an increased understanding of plant-soil interactions, new breeding efforts and inoculation products could serve to further optimise such systems to make them more resistant to climate changes, increase their nutritional values, protect soils and assure sustainable agricultural productivity for current and future generations. Industrialised food systems pose high demands on cropping systems in terms of quality, consistency, and availability of produce, making the transition to soil biology-based farming more challenging.

Moreover, some farmers are hesitant to adopt more sustainable practices since they often require more work and planning efforts and bear the risk of reduced income, at least during an initial phase of transition. Here, policy needs to step in and set the right incentives to give producers the opportunity to invest in the long-term sustainability of their soils instead of sacrificing their most important resource for short-term profit. Moreover, external costs of intensive agriculture (e.g. soil erosion, polluted drinking water, soil carbon loss) need to be accounted for.

Agricultural activities have a major impact on soil health and the ability of soils to provide the crucial ecosystem services our society depends on. If managed accordingly, soil biology can release a huge and currently under-utilised potential to produce agricultural yields in a sustainable way, so that the soils of today can still nourish the generations of the future.

Sebastian Franz Bender is Team Leader for soil ecological engineering in the research group Plant-Soil Interactions at Agroscope and the research group Agroecology and Plant-Microbiome interactions at the University of Zurich, Switzerland. His team investigate how ecosystem services provided by soil organisms can be promoted in agricultural systems to enhance the sustainability of production.
Marcel van der Heijden heads the Plant-Soil Interactions research group at Agroscope. He is Professor for Agroecology and Plant-Microbiome interactions at the University of Zurich, and Professor for Mycorrhizal Ecology at the University of Utrecht, the Netherlands. His team investigate the importance of soil biodiversity for ecosystems and test a wide range of tools to enhance the sustainability of agricultural systems, including soil ecological engineering, mycorrhiza and compost application, cover crops, organic farming and conservation agriculture.
Contact: franz.bender(at)agroscope.admin.ch