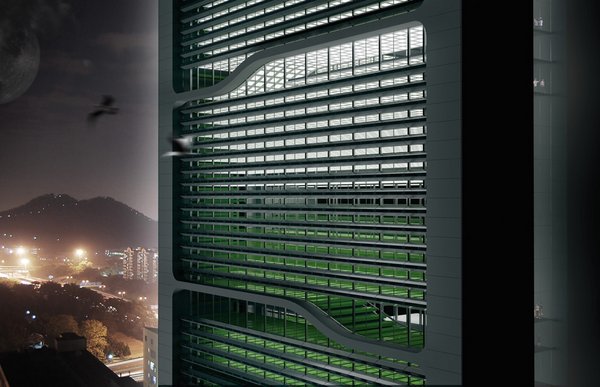 Megacities in Asia require millions of tonnes of rice every year to feed their growing population. Producing staple food, such as rice, directly within the city, would reduce transport requirements, would liberate large surfaces and make them available for other new ecosystem services. Skyfarming is a novel vertical farming approach to produce staple food in a multi-storey building that is largely independent of the environment and climate.

People prefer to settle at locations that have fertile soils available, leading to a competition for land between expanding urban and rural agricultural areas. Between 1.6-3.3 million hectares of land best suited for agriculture are estimated to be lost to urbanisation every year (Lambin & Meyfroidt, 2011) and, thus, the area available to food production decreases from 0.5 hectare per person in 1950 to 0.2 hectare per person in 2050 (Moore et al., 2012). Cities and urban areas have an extremely high demand for staple food. Producing this staple food is land-intensive and is located in rural areas. At present, 26 metropolitan areas with more than ten million inhabitants exist worldwide, of which 15 megacities are located in Asia.

How to reach food security in growing megacities?

Rice (Oryza sativa) is the second most important staple food crop on a global scale. At 154 million hectares, it covers more than 22 per cent of the global production area for cereals (FAOSTAT 2012). Rice is staple food for about three billion people in Asia (Molden 2007). Thus, megacities in Asia require millions of tonnes of rice annually to feed their population.

An example: The urban sprawl of Tokyo in Japan has about 35,000,000 inhabitants. Japan consumes about 58 kilograms of rice per capita and year (Molden 2007). This translates to about 150 grams of rice per person and day. Multiplying the number of inhabitants of Tokyo with the daily per capita consumption results in a daily consumption of 5,250 tonnes, which is the equivalent of 130 forty-tonne truck loads per day or 1.9 million tonnes per year. Translating this into rice yield corresponds to about 2.7 million tonnes of paddy rice. At an average annual yield of 6 tonnes/ha this amount corresponds to 450,000 hectares or about 2.2 times the current surface of Tokyo.

It is obvious that the ecological footprint of such a demand is beyond estimating, particularly if water and CO2 are included. To date, 24 – 30 per cent of the freshwater resources that are used worldwide are employed in the production of rice (Bouman et al. 2007). Therefore, rice production is one of the greatest consumers of water and land. However, due to a growing demand, yields will have to increase in spite of the scarcity of water and land resources (Rijsberman 2006). In 2025, 15 – 20 million hectares of rice fields will suffer from water scarcity according to Tuong and Bouman (2003). Rice production is one of the largest emitters of methane, a greenhouse gas 3.5 times more relevant for global warming than CO2 (Wassmann et al., 2000). Five to twenty per cent of the global methane (CH4) emission of about 600 Tg a-1 (Tg a = teragram per year) derives from rice production systems (Abao et al., 2000; Kirk 2004; Jagadeesh Babu et al., 2006). In addition, transporting large quantities of staple food over long distances requires substantial amounts of fossil fuel.

Skyfarming – producing rice in the city

Innovative rice cultivation systems such as skyfarming have a high potential for mitigating greenhouse gas emissions and climate change, while at the same time avoiding water and nutrient depletion.

Producing staple food such as rice directly within the city would reduce transport requirements, would liberate large surfaces and make them available for other, new, ecosystem services. However, since all farming systems, traditional, conventional or organic alike, produce horizontally and mostly outdoors, agriculture is the only industry whose production is dependent on weather conditions in the respective region, rendering annual yields potentially unstable. Thus, since horizontal production within city limits would not be feasible, the only way is up! Production needs to shift to indoors, capable of producing high quality products, as fully resource-efficient as possible with resource flux cycles (water, nutrients, energy) as closed as possible, and with a minimum of environmental pollution.

Skyfarming is an alternative concept for crop production following an efficiency strategy, i.e. minimisation of resource use per unit produced (Germer et al. 2011). In a multi-storey, fully controlled environment, crops are produced indoors with the following objectives:

The challenge is to develop a functioning and resource-efficient production unit within a building envelope which can be produced in series in a cost-efficient way. “Vertical Farming“ is discussed in the USA (Fischetti 2008, Vogel 2008) with partly futuristic architectural designs that, however, do not relate to the cultivation techniques. All previous approaches have focused on specialised crops in the high priced segment, partly in combination with fish-farming and/or small animal husbandry, and therefore not addressing the most pressing problem of food security in cities for the two decades to come.

With skyfarming, the emphasis is given to a staple crop for the first time. Unlike the previous approaches, the skyfarming concept pursues an efficiency strategy which means reducing the resource use per generated product unit through technological innovation while maximising recycling. The crop and its physiological requirements are in the centre of the overall scientific concept. From sowing to harvest, the rice is continuously moved via a conveyer system within a technically optimised building envelope into the respective environments (radiation, temperature, humidity, etc.) that are optimised for its respective growth stage. Instead of soil or hydroponics, an aeroponic cultivation system has been developed for the supply of water and nutrients (supply of nutrient-rich mist to the roots). The crop’s light requirements will dictate the light source to be selected, the quality and duration of illumination, as well as the direction. Energy efficient LED technology is being developed to satisfy rice requirements for light energy and quality at any given development stage.

Aeroponic systems, the transport and carrier system for the crop, new insulation methods, innovative energy supply, efficient re-cycling technology for energy, water and nutrients, and pest- and disease-free crop cultivation are special technical challenges that require a highly interdisciplinary cooperation and research. In addition, questions will arise with regard to the building itself (e.g. statics, insulation), the management of the production system (e.g. logistics, informatics), and its socio-economic embedding (e.g. consumer behaviour, urban and landscape planning, as well as acceptance).
Once this technology has successfully been tested for rice production, the system can be adapted to other staple food crops such as wheat, potatoes or even maize. There are many open questions still, and alternative options are being discussed. However, particularly with emphasis on feeding cities in the 2050’s, technology that holds the potential to do just that needs to be developed and tested today, so that when the need arises, a solution can be proposed.