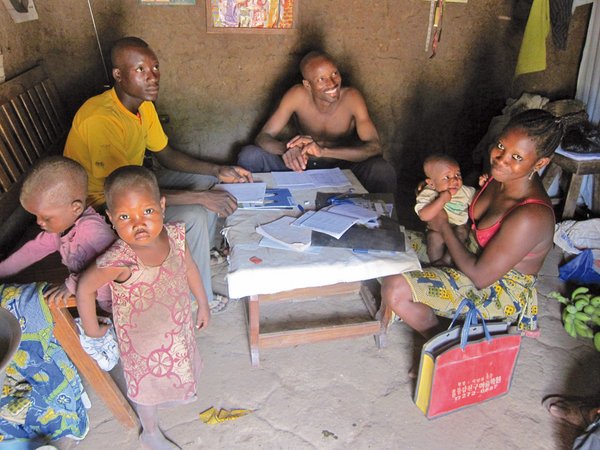 The MAFF approach extends far beyond just knowledge transfer on agricultural production. It is focusing on the farmers and their family farms and addresses both the economic and social contexts. Exchange between farmers about their results is supported in regular meetings.
Photo: Marine Rouchousse

Setting out from farmer realities

The aim of the “Management advice for family farms” (MAFF) approach is to strengthen the abilities of farmers to manage their farms and improve their economic and social autonomy. In Francophone Africa, this holistic concept has been applied successfully for almost two decades.

In West Africa, the partial withdrawal of the state from agricultural extension functions has led to the rise of a pluralistic form of advisory services being provided by various actors. However, these new actors (non-governmental organisations – NGOs, producer organisations – POs, agro-industrial companies, etc.) have assumed the advisory role only partially. Moreover, their advisory approaches are geared to meet their own specific objectives. Breaking with the old top-down extension practices to promote more participatory approaches is not easy. In addition, governments are struggling to finance advisory actors in a context of limited budgetary resources. They are also having difficulties promoting the development of innovative advisory mechanisms to help meet the plurality of producer needs or to extend support for new approaches outside of project-based schemes. It is in this context that MAFF (Management Advice for Family Farms) approaches have been promoted in Francophone Africa for nearly two decades, first with the support of French co-operation entities. Support from elsewhere in Europe (Belgian, Dutch, Swiss co-operation entities) and involvement of some governments have made it possible to adapt the MAFF approach to different contexts. Today, MAFF programmes exist in more than ten countries in Francophone Africa, integrated into advisory services provided by NGOs, POs, cotton companies, or government-dependent agencies. They impact approximately 100,000 producers.

The MAFF approach aims to strengthen the ability of farmers to manage their farms and improve their autonomy with regard to their economic and social environment. It is based on participatory methods providing (i) self-analyses to modify farmers’ and advisers’ representations of the problems addressed, and (ii) decision-support tools based on technical and economic records (book-keeping) to produce new knowledge and generate learning processes. In this regard, management is perceived as a cycle consisting of different phases: analysis, forecasting, action, monitoring, adjustment, and evaluation. The advisor carries out a joint analysis of results obtained by each farmer. Exchanges between farmers about their results are always encouraged through regular meetings (training, field visits, on-farm experiments, etc.) since they stimulate strong dynamics. MAFF distinguishes itself from extension services which aim primarily at transferring knowledge and new practices to farmers, notably in the field of agricultural production. The MAFF approach is similar to that of ‘Farmer Field Schools’ in that it promotes farmer learning. It does so, however, by focusing on the farmer and his family farm (and not mainly on crop production) through technical and economic analyses.

MAFF in action:  the example of Benin

One of the first countries in West Africa to implement MAFF was Benin, starting in 1995, in the framework of pilot projects. MAFF is currently being implemented there with the support of bilaterally funded programmes, such as PADYP (Project to Support Development of Production Dynamics), funded by the AFD (Agence Française de Développement). Advice is provided by nearly a dozen NGOs who have acquired extensive experience in MAFF, by POs such as FUPRO (Federation of Producer Unions of Benin) or by the Ministry of Agriculture, which has recruited more than 250 advisers for MAFF. Nearly 20,000 farmers are involved in MAFF in Benin. Based on the experience gained in the field of MAFF, the Ministry of Agriculture drafted a document in 2007 entitled ‘White Paper on agricultural advisory services in Benin’ in an attempt to extend the approach to the entire country and to identify complementarities with other forms of advisory services. A ‘National Strategy for Implementation of Agricultural Advisory Services’ (SNCA), also released in 2007, divides advisory services into five categories: 1) specialised technical advice (already in existence), 2) advice on market access, 3) advice to farmer organisations and local planning, which includes advising producer organisations, 4) farm-management advice and 5) food and applied nutrition advice. MAFF is therefore part of the wider advisory system to provide “farm management advice”. At national level, a formal co-ordination mechanism among actors providing advice is still missing. However, some initiatives do exist. For example, projects or international organisations such as AFAAS (African Forum for Agricultural Advisory Services) organise national workshops to share knowledge. NGOs involved in MAFF provision have built a network to assess methodologies. National farmers’ organisations such as FUPRO represent the voice of farmers in national fora.

The adviser conducts group advisory sessions but also advises farmers individually. MAFF is implemented in a flexible and gradual manner. The adviser uses a farm-diagnosis phase to identify the farmers’ requirements and orient activities together with them. He then organises collective training on farming techniques (fertilisation of maize, cotton pest control, regulation of blooming of pineapple, etc.). He also teaches them management concepts and the use of corresponding tools (crop-season planning, grain stores management, cash flow planning, revenue-expenditure accounts, etc.). In this way, MAFF encourages farmers to reflect about their own managerial practices, helps them incorporate measurements and forecasting in their practices and teaches them to use technical and economic indicators (gross margin, costs/income ratio, etc.). This supports the farmer in analysing his farm’s performance.

During the crop season, the adviser ensures individual monitoring of farmers in their fields to provide additional targeted advice. At the end of the season, a first analysis of the technical and economic results, both at crop production level and entire farm level, is undertaken with farmers in group meetings. Some advisers use computers to perform additional processing on the data of the farmers. These more accurate results are then presented and discussed with each farmer. Based on the results of the previous crop season, the advisers and farmers plan the following crop season together with the farmers. Under the MAFF approach, exchanges between producers are encouraged through various collective activities (training, group meetings to discuss results, field visits to share experiences, trials in farmers’ plots to test innovations, etc.).

To improve access to MAFF for other farmers, NGOs encouraged the initial MAFF participants, often literate in their own language, to form new groups in their villages. This is how farmer extension workers were trained and supported by NGO advisers to be able to deal with the most basic themes with new producers (planning rotations, calculations of gross margins, etc.). Farmer extension workers in Benin now number almost 500, with some of them even being remunerated for their work. At present, the main focus of advisory actors is to adapt the method for non-literate farmers, either through conducting literacy programmes while teaching the use of management tools or by developing management tools that do not rely on written matter.

The chief benefits for farmers

MAFF helps farmers acquire new knowledge and new skills. Farmers make use of this knowledge and these skills to change their agricultural and managerial practices (early sowing, separation of cereal stock for self-consumption and for selling, better planning of cropping seasons, etc.). “This advice helps us develop our ideas”, they say, commenting on MAFF. “Now we know we are able to change.” “In the past, we used to draw from the grain store, and when it became empty, we had to manage”, some farmers report with regard to prediction and management. “This year, after harvest, we calculated the quantity for family consumption. We separate the bags for family needs and sell the extra ones.” The changes made by farmers participating in MAFF have a significant impact not only on their own farms and families but also on those of non-participants whom the participants exchange ideas with. These impacts are, however, difficult to measure and quantify. In 2010, a study in Benin by an independent institute, IREEP (Institut de Recherche Empirique et d’Economie Politique) involving 254 farmers who had participated in MAFF for at least three years between 2000 and 2007 provided significant results

Strong involvement of producer organisationsMAFF is also particularly useful for Producer Organisations. PO members who participate in MAFF improve the performance of their farms which in return can make the POs stronger. Some MAFF participants then become leaders in their PO and can therefore use the management skills acquired via MAFF for its benefit. Moreover, in many countries, the POs play a special role in the direct implementation of MAFF. Examples include several POs of the management network in Burkina Faso, the Federation of Producers of Fouta Djallon (FPFD) in Guinea, FUPRO, or the National Union of Cotton Producers of Burkina Faso (UNPCB).  A producer organisation may efficiently implement advisory services when it has adequate human and financial resources. Advisory services implemented by POs can be expected to be oriented more in line with farmer requirements than those provided from outside. The PO itself is strengthened since it offers an additional service to its members and, in the process, gains a finer understanding of the constraints and opportunities of its members’ farms. However, the PO has to take care to properly integrate MAFF into its activities. If it does not, managing MAFF directly can weaken it through the dispersion of its activities, lack of adequate management of its salaried advisers or financial instability. For example, the National Union of Cotton Producers in Burkina Faso tried to implement MAFF in relationship with the cotton companies but without taking into account the advice already provided at grass root producer organisation level. This situation entailed tensions and unsustainable costs. In the end, the actors had to call off the venture.All in all, experience with MAFF has shown that setting out from farmer realities provides better results than applying a top-down approach in advisory services. While the farmers themselves benefit from MAFF support, producer organisations can reckon with a stronger membership and gain from the additional skills that their members have acquired.