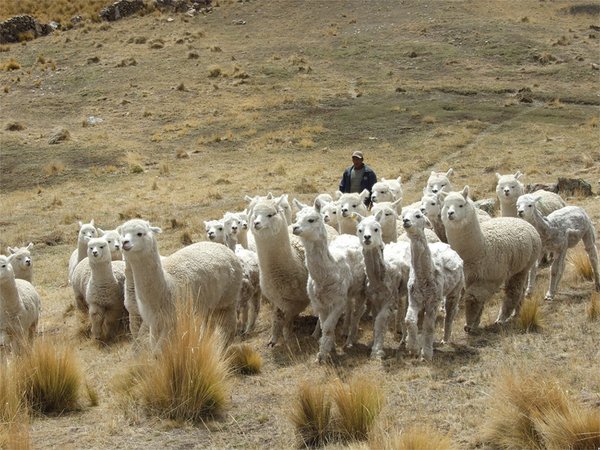 Pastoralists exploit land which is often too marginal for other agricultural uses.
Photo: VSF Spain

Formal land titles are rare in pastoral communities around the world. In the past, this presented hardly any problems, since pastoral land was seen as of little use by most outsiders. But with growing competition for areas legal uncertainty is becoming an increasing threat to the livelihoods of pastoralists.

Pastoralism is a livelihood system based on free-grazing animals that is used by communities in marginal areas. The land may be marginal for various reasons, including poor water supply or soil quality, extreme temperatures, steep slopes and remoteness. Pastoralism enables communities to manage their resources in a sustainable, independent and flexible way. It is marked by rights to common resources, customary values and ecosystem services.

It is estimated that today nearly 200 million mobile pastoralists around the world generate food and incomes for their communities, and contribute to biodiversity conservation and to climate change mitigation. If the extensive agro-pastoralists are added to these nomadic and transhumant pastoralists, the number rises to up to 600 million people. Pastoral systems are sustainable low-input systems that are extremely adaptable to the respective environment and to the specific socioeconomic conditions. Yet, pastoral communities are often marginalised, lacking political recognition and proper political and institutional support. As a result, they are frequently confronted with difficult access to natural resources and with insecure land and water tenure rights, which in some cases can cause conflicts. In addition, people in pastoral areas often lack proper infrastructure, they have limited access to markets, and basic services generally remain scant and distant.

Vétérinaires Sans Frontières (VSF) International and its member organisations are implementing a project that aims at identifying the key factors to promote sustainable pastoralism, to produce recommendations for effective policies and programmes and to strengthen the advocacy potential of local community based organisations and their networks. For this, we conducted a study on pastoralism in 26 countries in Africa, Asia and Latin America, including a survey in six “hotspot regions” where pastoralism is a major form of livelihood, and five regional stakeholder gatherings in which, among other items, priorities for investment in pastoral development were established (see Box). Here, it was also revealed that protecting customary land-tenure rights has to be put right at the top of the agenda.

Pastoralism is often associated with grasslands, rangelands or drylands (these terms are overlapping but not synonymous). But the match is far from perfect: pastoralists also herd their animals in the tundra, mountains, forests, desert and bushlands, and some grasslands are ranched or used for intensive livestock raising. Estimates of the area of pastureland vary hugely, between 18 and 80 per cent of the world’s land surface. This vagueness is partly because (unlike for forests, for example) no organisation is responsible for keeping track of such types of land.
Access to grazing land is vital for the pastoral mode of production. Pastoralists use few or no external inputs, and they exploit land which often is too marginal for other agricultural uses. For many areas, pastoralism is the only viable land-use type. It uses land, water and vegetation in a sustainable way. It has shaped and helps maintain landscapes, and conserves biodiversity.

Pastoralists rely on livestock mobility and communal land for their livelihoods. Land tenure is one of the main challenges pastoralists face and is the root of many conflicts. Rules on land tenure vary widely among countries, but most formal legal systems do not recognise or guarantee customary tenure rights. In our survey, 42 per cent of the pastoralists said they owned land individually, while another 15 per cent said their community owned it. But formal titles are rare: only 15 per cent of the individual owners and six per cent of the community owners had formal titles. Customary ownership is far more common.

In the past, this lack of formal rights did not matter: outsiders regarded pastoral land as of little use. But this has changed: the discovery of oil and minerals, the expansion of intensive cropping, urbanisation and the designation of nature reserves and wildlife parks have boosted interest in pastoralist areas. Such uses often occupy the best-watered land, cutting off herders’ access to pastures and water sources they rely on in the dry season. Often, governments promote outside investments, but ignore the rights of pastoralists, who are branded as criminals and forced into ever-drier and more remote areas, or induced to opt for sedentarisation.

In the Afar region of Ethiopia, for example, pastoralists and livestock keepers have already lost over 75 per cent of their fertile wet grazing areas to the Ethiopian government and foreign investors who pursue huge investments such as the transnational road to Djibouti, sugar plantations or resettlement schemes. Also in Latin America, land issues are of major concern for both indigenous and peasant movements, who struggle to protect their land rights against land grabbing from mining and agribusiness expansion.

Access to water is intrinsically linked to access to land as well. Encroachment on pastoral lands may often entail overuse of water sources, e.g. for agricultural or mining purposes, further aggravating the situation. And the declining land base for pastoralists may fuel conflicts between different user groups, competing for the scarce resources.

Results of our survey reflect that pastoralist societies have their traditional rules and rangeland management norms that also include entrusting land to pastoralist groups and individuals. In the eight surveyed pastoralist territories, the largest part of land is linked to customary rules governing both individual and community ownership and use of land. In order to guarantee access and user rights to land and water governments have to recognise and protect customary land-tenure rights, traditional rules and rangeland management norms. Communities should be able to formalise their customary tenure.

Also, governments should ensure effective application of international instruments and mechanisms that protect the rights of pastoralist communities, as the UN Voluntary Guidelines on the Responsible Governance of Tenure of Land, Fisheries and Forests stipulate (see also "Making the SDGs count for land rights"and “We can‘t be satisfied yet“).

A territorial approach is needed

Since pastoralism is by definition mobile and occupies vast territories, agreements and policy harmonisation between neighbouring countries deserve special attention when dealing with land issues in cross-border areas. Cross-border co-operation is crucial for a variety of reasons: to promote trade, facilitate movement, control transboundary diseases, mitigate conflict, etc. Cross-border issues are often best dealt with through contacts between customary authorities, pastoralist representatives and local authorities on either side. In order to enable a sustainable development of pastoralism, it is important to recognise a territorial approach in rangeland and dryland management. Regional planning should be approached from a territorial point of view in which all stakeholders learn from each other and find together adapted solutions. One example of this is the setting up of Pastoral Units (PU) for planning and managing pastoral territories and resources, which have been promoted in Senegal by several organisations, including AVSF. The PU works as a dialogue framework involving all the stakeholders: village representatives, transhumant livestock keepers, local farmers and livestock keepers, management committees of each of the local common infrastructures and equipment (water, forage stocks and shops, vaccination parks, etc.) and local authorities. The creation of Pastoral Units, based on transparency and equity, allows for a better appropriation of the territory by all stakeholders (including transhumants and autochthons) who directly engage in local development. They allow for a better regulation of access to and use of natural resources – mainly pastures and water – and contribute to reducing conflicts.

The study is part of the project on the promotion of sustainable pastoralism, which is co-financed by the International Fund for Agricultural Development (IFAD). It was based both on inputs from surveys on the enabling environment and policies related to pastoralism in 26 countries and a survey of pastoralist practices in eight “hotspots” where pastoralism is a major form of livelihood: the Arkhangai in Mongolia; the Altiplano and Chaco in South America; Wagadou and Gourma in the Sahel; Tiris Zemmour in the Sahara and the Afar and Chalbi areas in the Horn of Africa. In addition, five participatory regional stakeholder gatherings were held in Bamako (Mali), Nairobi (Kenya), Hammamet (Tunisia), Hustai (Mongolia) and La Paz (Bolivia) in January 2016. Each of these meetings produced a statement on priorities for investment in pastoral development, along with recommendations for policy dialogue and partnership with development organisations. In all, experience gathered by 122 pastoralist organisations from 38 countries was contributed.