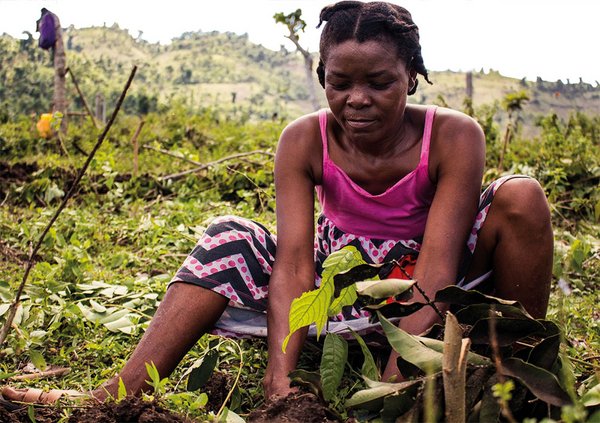 The earthquake in Haiti destroyed many landscapes. Planting tree seedlings shall protect the landscape from erosion and degradation, and it improves ecosystem services.
Photo: FAO Haiti

Returning to agriculture – the case of Haiti

Natural disasters cause crises and food insecurity. In January 2010, an earthquake disrupted life in Haiti. But how did the country find back to operations, especially to agriculture to nourish the population? Looking at the dairy and seed sector besides introducing measures to disaster risk reduction and climate change mitigation and adaption, our author shows how Haiti came back on track.

With around 300,000 people dead, over one million made homeless in Port-au-Prince – the capital of Haiti – and more than three million forced into food insecurity countrywide, the January 2010 Haitian earthquake was one of the deadliest and most merciless natural disasters in modern history. In the midst of the confusion brought about by this calamity, the United Nations Food and Agriculture Organization (FAO) identified the revival of agriculture and production boosting as a priority, if the country was to feed survivors in the months and years ahead. Equally, FAO recognised the challenge of achieving this goal with the exodus of over 600,000 homeless from the quake-hit capital to impoverished, food-insecure and malnourished rural areas with degraded soils and deforested mountains, and the destruction of roads, bridges, fishing ports, irrigation and market infrastructure, in addition to shortage of resources. Amid great needs and scanty financial resources, decisions had to be made and priorities determined. Intensive consultations with all stakeholders at all levels across the agriculture and allied sectors set four pillars to guide FAO’s interventions in the country (see Box below) which are described in the following.

The goal has been to ensure that information systems on food and nutritional security are functional and inter-sectorial interventions are integrated and co-ordinated. Public institutions have trained managers and set up adequate tools to carry out their mandates. Policies and strategies are jointly identified by the government and other stakeholders, and related Action Plans are implemented.
In this regard, the Technical Group for Food and Nutrition Security, consisting of government representatives, UN agencies, financial partners and national and international NGOs, meets regularly to co-ordinate the food and nutrition security sector. A yet-to-be implemented operational document for setting up an early warning system is in place. FAO supported the National Food Security Coordination in organising several training workshops on different aspects of Integrated Phase Classification of Food Security and Nutrition, targeting government staff, NGOs and other stakeholders with the aim of improving the understanding and analysis of chronical and acute food insecurity.

One significant milestone was the creation of a Parliamentary Front against Hunger in Haiti (FPFH). This inclusive and integrated platform brings together parliamentarians and senators of all political blocs sharing the common goal of reflecting on and addressing key issues related to food and nutrition security and the right to food in the country. FPFH’s specific objective is to ensure allocation by the government of sufficient resources to the formulation and implementation of relevant laws, public policies and programmes, with the aim of easing access to healthy and adequate food for the population and eradicating hunger and malnutrition in the country. FPFH is already working on draft laws on food sovereignty, school feeding, family farming, seed law and protection of plant varieties. These are strategic tools for pushing FAO's agenda forward in the country and making Haiti a ‘hunger-free’ nation one day.

Increasing the production and marketing of milk

An important element of FAO’s intervention to revive agriculture after the earthquake was to promote agricultural value chains. The latter are critically underdeveloped because of, inter alia, the lack of processing and storage facilities, which leads to very high post-harvest losses, estimated at 35 to 40 per cent in some sectors. Moreover, local markets are poorly developed and, owing mainly to lack of competitiveness, poor hygiene coupled with insufficient sanitary and phytosanitary controls of locally produced goods, producers have very limited access to international markets. Starting in 2011, FAO’s assistance aims to increase productivity and output of several agricultural products such as cassava, peanuts, fruits and dairy products. In the dairy industry, for instance, the specific aim was to boost milk production, improve milk hygiene, diversify and enhance standards of dairy products, and increase incomes and the living standard of dairy farmers, especially small dairy farmers. To achieve this goal, more than 800 milk producers (comprising 13 Associations of Milk Producers – AMP – received practical training on techniques for enhancing the production of quality milk as well as best practices on animal husbandry. Thirteen dairy companies managed by the AMPs have improved the quality and double the quantity of dairy products which were sold at local markets. They have become self-sustained micro-businesses that master the collection, testing and processing of milk as well as business management.

To improve animal health, we introduced Mobile Veterinary Clinics (MVC), and trained and equipped 10 veterinary technicians. In 2017 alone, these technicians provided preventive and curative healthcare to 2,943 animals, including 1,512 cows, 860 goats, 156 equines, 351 pigs, 26 chicken and 38 sheep, belonging to 1,147 families. With MVCs and the adoption of good practices, including the production and use of fodder in the form of hay and silage, milk production doubled. Dairies were an incentive for cattle farmers to apply good practices because they were a guaranteed market for milk, and farmers noted a direct relationship between well-functioning dairies and their income levels. Before well-functioning dairies were established, farmers would sell milk on the informal market at 50 Gourdes (USD 0.70)/gallon, and would receive payment on the spot or surrender their produce for later payment. With the dairies, the price of milk has risen to 125 Gourdes and the seller receives payment at the end of the month without fail. These dairies have become a symbol of pride and success for farmers.

Extreme environmental degradation following massive deforestation and unprecedented degradation of other natural resources is undeniably one of Haiti’s most immediate threats. The problem was existing already before, but the earthquake exacerbated the situation as people were overharvesting natural resources in terms of the country’s survival as a nation, in general, but also vis-à-vis agriculture. Only less than 1.5 per cent of Haiti’s original forest cover remains intact. As a result, 25 to 30 per cent of the national watersheds are completely degraded or altered. Ready-to-use water resources have become scarce across the country, and most wildlife habitats have been destroyed or seriously damaged. Biodiversity sanctuaries across the country have become very vulnerable and many are close to extinction levels. In many parts of the country, arable land is severely depleted by erosion processes, and most rural farmland has become virtually unproductive. Longstanding droughts, a series of devastating hurricanes, damaging agricultural practices and clear-cutting of tree stands in search for livelihoods through charcoal and firewood for energy exacerbate this situation and further put millions of people in a state of food and nutrition insecurity.

After the 12th January 2010 earthquake, FAO together with the Government of Haiti (particularly the Ministry of Environment and Ministry of Agriculture) and other stakeholders, worked hand in hand to prepare useful environmental policy instruments such as the National Action Plan for Adaptation to Climate Change (NAPA) and Municipality Disaster Risk Management Plans. FAO and its partners also prompted communities to identify, adopt and disseminate climate resilient agriculture, and agro-forestry, erosion control and natural resources management practices. Lately, this has been done within the framework of the “Action against Desertification” project financed by the European Union, Belgium and Spain, and implemented in Grand’Anse by FAO and the Ministry of Environment. The project aimed to help combat land degradation and improve the state and productivity of selected fragile landscapes. Its approach was to put people at the centre of interventions and decision-making through Farmer Field Schools.

The project achieved substantial results, including strengthening the capacity of local communities to establish and manage tree nurseries and water micro-catchments. Communities created 30 nurseries, produced and planted 1.7 million fruit, wood, fodder, hedgerow and multi-purpose forest and agro-forestry trees from these nurseries, and restored 395 ha of degraded land. However, perhaps the most laudable achievement is the change of basic community organisation (Organisations Communautaires de Base – OCB) members’ behaviour and the impact on community members.

Enhancing the resilience of smallholder farmers

This pillar focused on reinforcing the interface between climate change adaptation and disaster risk management as way of mitigating risks and vulnerabilities and enhancing the resilience of smallholder farmers. Thus, FAO actively participated in the elaboration of a “National Policy and Strategy for Food Sovereignty, and Food Security and Nutrition in Haiti” and led the review of the National Food Security Plan. Moreover, FAO oversaw the preparation of a multi-year plan for the sector governance, food security analysis, partnership and co-ordination, and the elaboration of departmental and municipality Food and Nutrition Security Action Plans. In Farmer Field Schools, family farmers tested a number of climate-resilient practices and technologies, such as drought-tolerant seed varieties, conservation farming, agroforestry schemes, tree planting, contour and slope farming and other soil and water conservation techniques. One particular experience is worth sharing...

...the recovery of the seed sector

After the earthquake, many stakeholders undertook the distribution of imported seeds with a risk of introducing poor quality seeds and varieties unsuitable for Haiti. Confronted with this situation, the Ministry of Agriculture (through the National Seed Service) and FAO agreed to intensify capacity building activities and technical support to local groups of seeds producers (Groupements de Production Artisanale de Semences – GPAS) for the production and marketing of Quality Declared Seeds (QDS). Hence, 150 GPAS, from all over the country, received training as well as packaging and storage equipment. They have an annual production capacity of more than 1,000 tons of seeds (cereals and pulses) and 20 million of planting materials (sweet potato, cassava, yam and banana). By building the GPAS’s operational capacity, FAO has contributed to improving the availability and accessibility of good quality and climate-resilient seeds and planting materials for family farmers regularly affected by the negative impacts of climatic change. Unlike what was happening in the period following the earthquake, seeds and planting material used by different stakeholders, including humanitarian actors, comes largely from the GPAS. At the same time, to encourage local seed production, FAO introduced the ‘seed fairs’ approach as a special voucher system, whereby a temporary market is set up to allow small-scale farmers to access, at subsidised prices, seeds of species/varieties adapted to their locality and produced by GPAS. Since 2011, more than 65,000 vulnerable households acquired quality seeds from seed fairs organised by FAO and its partners. The use of quality seeds, from seed fairs, increases crop yields by at least 30 per cent compared to sowing seeds of unknown quality (in fact, grains) sold on local markets by undeclared producers. This approach improved local economies as well.

To ensure sustainability of the seed sector, FAO has also strengthened the capacity of the Ministry of Agriculture staff in seed quality control and certification and pre-basic seed production, and has assisted the latter in the formulation of a National Seed Policy adapted to the country’s context.

Haiti made important progress towards reviving its agriculture apparatus since the 2010 earthquake, but the sector remains highly vulnerable to both man and nature inflicted disasters. A combination of short-term humanitarian and longer-term comprehensive, solid and resilient food production enhancing, employment creating, and poverty-reducing agriculture development programmes could be the right path to ending the country’s chronic food and nutrition insecurity, which requires the International Community’s collective effort.