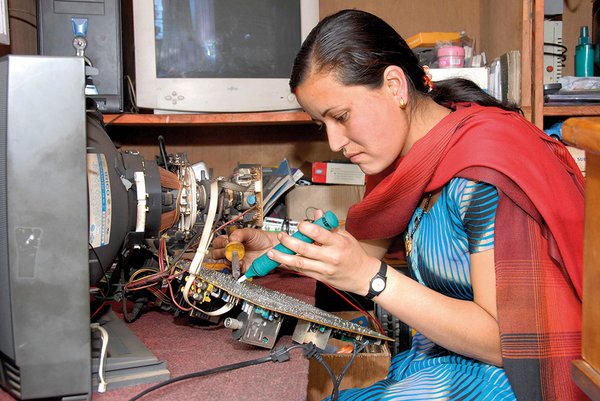 A graduate repairing a TV in her electronics shop.
Photo: HELVETAS/Silvia Voser

Training for young people doesn’t make sense in itself if it is not related to employment. But how to ensure that the “right” skills are provided and in a quality that matches with the needs of the labour market? And that the graduates do not end up well-trained and yet jobless? The Employment Fund Nepal managed to bring nine out of ten trained disadvantaged youths into employment, 90,000 in all. The recipe for success was a resultsbased financing model for training providers.

About half a million young people enter the Nepalese labour market each year. Poor formal education, limited technical skills and family responsibilities as well as a poorly developed private sector make attaining gainful employment a challenge for these young people. This is why the Employment Fund was established in 2007 – targeted at disadvantaged, unemployed out-of-school youth, mainly in rural and semi-urban regions. It was financed by UK Aid, the Swiss Agency for Development and Cooperation and the World Bank, with an overall budget of about 36 million US dollars (USD). Helvetas operated the secretariat of the fund. The project ran until 2016. The Employment Fund financed skills training and employment services through around 60 contracted training providers, mainly private firms. It covered 87 per cent of all districts in Nepal and approximately 80 occupations in different sectors (e.g. construction, hospitality, garments and textile, agriculture, electronics, mechanics, etc.). The training courses usually lasted three to four months. Eighty per cent of the classes were practical, and were often run in service provider workshops, but also in companies; theory lessons accounted for the remaining 20 per cent. After the training, the trainees underwent a national assessment and got an official certificate.

Special emphasis was placed on the inclusion of women and other disadvantaged groups, aged 16 to 35, with a focus on women under 24 (in co-operation with the World Bank’s Adolescent Girls Employment Initiative). Alongside communication campaigns and counselling, the service providers were offered incentives to target specific groups. This additional financial support was especially high where economically poor women from discriminated groups (Dalits, widows, the physically disabled and the internally displaced) were concerned, followed by economically poor women from all ethnicities and economically poor men.

Full payment of trainings only for gainful employment

In order to ensure the quality of the training, the fund applied a results-based financing approach. At the end of a course, the training firms received only 40 per cent of the agreed fee of 300–500 USD for each graduate, which did not cover their full costs (see Figure).

The major share (60 %) of the fee was paid only if the graduates were placed in a job (25 per cent if they were placed and the remaining 35 per cent only if the graduates earned an income above the official minimum monthly wage of 4,600 Nepalese rupees, which is equivalent to about 45 USD). With this arrangement, the training providers would make a loss if graduates remained unemployed, so they were motivated to establish networks with prospective employers and to offer services focusing on the employers’ needs and support for self-employment.

However, linking payment with proof of (gainful) employment also bore the risk that providers might exaggerate the amount of employed graduates. Several measures were put in place to clearly limit such irregularities, such as close and regular monitoring of graduates’ employment status with tracer studies and random, unannounced visits to employers to check employment and income status. External experts who assessed the risk of the results-based financing approach being manipulated did not find any evidence of this on site. They concluded that manipulation while probably not inexistent, would nevertheless be low thanks to effective control. However, such a monitoring system is also time- and cost-intensive.

The model proved successful. By the end of 2015, the Employment Fund had financed skills training for about 100,000 Nepalese young women and men, of whom over 90 per cent were employed and 75 per cent gainfully employed (see lower Figure). More than 50 per cent of the trainees were women. The transition period between the completion of training and employment lasted less than two months on average. The average monthly income of graduates was more than three times higher one to two years after graduation compared to before the training.

There was also a trend towards self-employment over time. Immediately after graduation, 56 per cent of those employed were in wage employment, while 44 per cent were self-employed. The opposite was the case two years later, when 44 per cent were wage-employed and 56 per cent self-employed. This confirms statements of graduates in in-depth interviews that they hoped for a more secure working environment, a higher income and more autonomy when self-employed. About half of the entrepreneurs were successful, while the other half were struggling with their businesses, mainly due to a lack of relevant additional competences and unfavourable markets. Self-employment is challenging, because it requires not just technical but other skills such as financial literacy, risk-taking and, above all, an “entrepreneurial mindset”.

Do we reach the poor and marginalised?

In order to establish whether the Fund achieved the targets and reached the target groups, Research Inputs and Development Action (RIDA), a private international research institute based in Kathmandu, and the Department of Geography of the University of Zurich were commissioned to undertake an analysis of the qualitative changes, focusing on disadvantaged groups, especially women and Dalits, in five districts of Nepal (Hollenbach et al., 2015). Graduates were of the opinion that the training was of high quality and that the skills acquired had increased their self-confidence. However, they felt that their new skills did not sufficiently meet their personal aspirations, mainly with regard to their income. Similarly, employers mentioned the need for further skills and work experience. The graduates valued the official recognition of having skills and the importance of the certificate. Caste-based discrimination and social norms still posed problems for marginalised groups such as Dalits seeking employment in certain jobs. A Dalit woman, for example, could find employment in stitching, while it was almost impossible for her to be hired as a cook in a local restaurant.

The Employment Fund managed to contribute to a change in certain societal perceptions by training women in occupations that are traditionally seen as “male” trades. Such social change can, however, not be achieved by a single project alone, and marriage and children still make women more likely to drop out of employment than men. With regard to income, graduates observed a significant increase and hence a more secure financial situation. Although the Employment Fund defined “gainful” employment as a monthly income of at least 4,600 Nepalese rupees, people perceived their income and its “adequacy” differently. Living costs in rural areas were significantly lower, and therefore even an income below the minimum wage was very welcome.

The overall impact of the Employment Fund was noticeable at three levels:
Personal level: The key change was greater self-confidence and independence. Women graduates in particular highlighted the fact that after the training, they no longer had to ask anyone else to meet their needs.

Family level: The income from newly gained employment supplemented family incomes and was mostly the main – sometimes even the only – source of family income. Hence, this income was used to finance basic expenses such as food, clothes, education and health costs. It also promoted a “saving culture” among many graduates and their families.

Community level: The vast majority of graduates reported that an improved relationship with the community was one of the key changes in their lives. They believed that the community – including neighbours – had a more positive attitude towards and perception of them after the training. Recognition from society was especially important for disadvantaged people considered inferior because of the caste system. The training and employment boosted the respect they earned and their self-confidence.

All in all, results-based payment in Nepal has proven an effective approach for offering practice-oriented and relevant training for masses of young people and for linking them to gainful employment. The Employment Fund also influenced the development of the state technical vocational education and training (TVET) policy, e.g. regarding mobile training for greater access, inclusion of marginalised people in trainings, and the plan to establish a TVET fund, which is, however, not yet in operation. In addition, results-based financing for training and employment is being replicated, adapted to the local context, by Helvetas in Mozambique and Ethiopia (see Box) and by other donors (e.g. ADB, UKAID) in Nepal, Laos, Mozambique and other countries.

Closer to the world of work with apprenticeships

In an attempt to formalise learning in Nepal, the Employment Fund collaborated with local chambers of commerce and industries. The aim was to make the training more workplace-oriented and graduates’ skills more applicable to the actual job requirements, also with a view to encouraging the government education system to do so. As a pilot in 2014, a concept of a three-month apprenticeship was developed. Young people were working in relatively formal settings, i.e. they were provided an employment contract and safer workplaces (e.g. protection equipment, clean and illuminated workplaces, regulated working hours). Around 90 per cent of 550 youths trained were ‘gainfully employed’, which means they earned at least 3,000 rupees per month during the training and at least 5,000 rupees per month after the training, paid by the company. The success of apprenticeships largely depends on the motivation and understanding of the associations and employers. There is still a great need to further sensitise all stakeholders for the importance of industry-based workforce development by presenting successful examples with positive effects on productivity, quality and economic benefits. For example, in some cases, the employers found it risky to train apprentices, because unskilled workers would potentially waste materials, and could take up too much time for supervision. Larger businesses tend to be more willing than small companies to invest in apprentices (Hofstetter & Jenny, 2016).

Transferring experience from Nepal to Ethiopia

The successful experience in Nepal has triggered the development of the Skills and Knowledge for Youth (SKY) programme in Bahir Dar in Ethiopia, where more than 1,100 people have been trained within two years. Results-based financing has also been effective here. 79 per cent of young people are in employment, and 69 per cent in gainful employment (earning more than the minimum wage income). According to a recent tracer study (Fantahun Gobezie Consultancy Service for Social Affairs, 2017), women (76 % of all graduates) show a higher employment rate than men (82 % compared to 69 %). On average, it takes graduates less than one month to get into employment. Major challenges when starting a business in Ethiopia included insufficient capital and limited access to credits. About one year after graduation, graduates could substantially increase their income (see Figure above), especially in self-employment. SKY strongly collaborates with the city administration of Bahir Dar, the TVET regional office and associations and enterprises. From 2018 on, trainings will not only be offered in the city, but also in rural areas, e.g. through mobile training.

Literature and sources for further reading