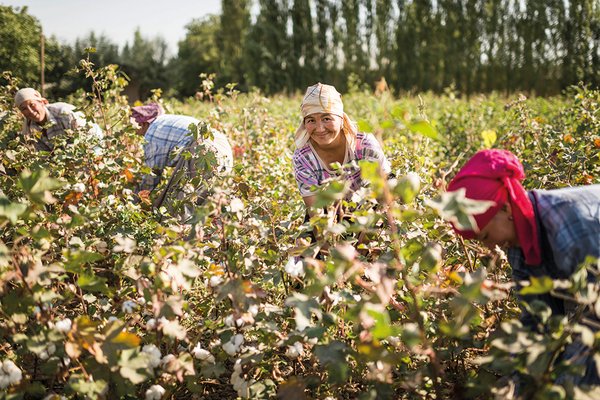 Social benefits were the primary reasons for the farmers to adopt organic practices.
Photo: © Simon Opladen

Organic and Fairtrade cotton – a way out of rural poverty?

Helvetas, with the support of the Swiss State Secretariat for Economic Affairs SECO, LED, ICCO and other institutional donors has implemented organic and Fairtrade cotton projects in West Africa and Central Asia for over 15 years. More than 22,000 farming families have benefited from a diversification of the agricultural production system, increased incomes as well as a healthier work environment. However, a number of problems occurred as well, such as contamination from neighbouring GM crops. So what can be learnt for future engagement in the organic cotton sector?

Helvetas set up its first organic and Fairtrade (O&FT) cotton value chain project in Mali in 2002, followed by projects in Burkina Faso, Kyrgyzstan, Benin and Tajikistan. Despite the diverse contexts, a majority of conventional cotton farmers faced similar challenges in these countries: Long-term monoculture and exaggerated use of subsidised chemicals led to health problems, depleted soils, and thus reduced yields. In many places, the low yields and volatile cotton world price resulted in negative gross margins and increased indebtedness of farmers. Despite the low profitability of conventional cotton, constricting policies and a lack of experiences in other cash crop production and alternative markets made farmers stick to cotton production.

In this context, organic agriculture offered a way out of indebtedness and increasing health problems of the farming families by providing an alternative production method doing without expensive and harmful chemical inputs, as well as by offering premium sales prices.

Since the concept of certified organic and Fairtrade products was new in these countries at that time, the projects focused on developing competences of producer organisations and external service providers to offer relevant services, such as rural advisory on organic production, supply of production inputs applicable in organic, the organisation of internal control and external certification, and marketing of certified crops (for the organisational structures of the three value chains and the services that the producer organisations offer themselves or buy from external service providers, see Figure below).

Impact of the organic and Fairtrade cotton value chains

By 2016, there were around 12,000 cotton farmers. However, both their numbers and harvest yield fluctuated considerably. On average, 9,007 farmers produced 2,621 tonnes of seed cotton annually plus rotation crops such as sesame and vegetables. This accounts for a total of 33,200 t O&FT seed cotton, or 291 kg of sold seed cotton per farmer and year. Assuming that farmers participated in the value chain for five years on average, more than 22,000 farm families benefited from the O&FT production. The fluctuating number of farmers (see also left Figure) reflects the serious challenges the organic value chains faced: 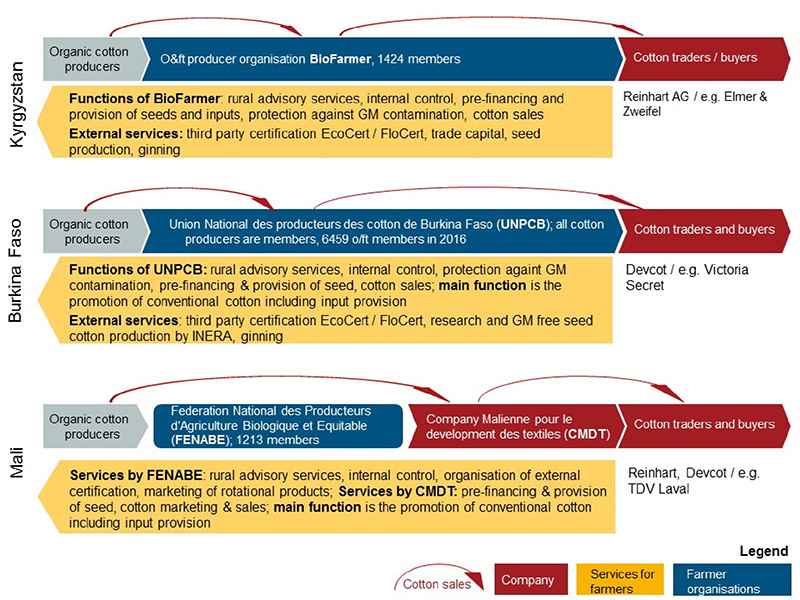 In Burkina Faso, Monsanto and the national cotton companies introduced genetically modified (GM) cotton on around 70 per cent of the productive cotton lands in 2008/09. The consequences and costs for the O&FT value chain were manifold: The first contamination of organic cotton in 2009 led to a wide de-certification of organic fields. In order to prevent further GMO contamination of organic cotton, the producer organisation UNPCB had to cease collaboration with farmers in these areas and shift organic cotton production to less fertile areas. Additional investments in the training of the new farmers were necessary. Transportation costs from the new areas to the ginneries were comparably high. Now that GM cotton seeds were available, the seed farms no longer bred local varieties at scale, and the farmers’ cotton seeds for replication were mixed up with GM seeds. Therefore, in the subsequent years, seeds for organic production were scarce and the farmers union had to import non-treated seeds from Togo, which proved to be a complicated bureaucratic venture. In addition, ginneries had to be cleaned before processing organic cotton owing to the risk of contamination. Ginning of organic cotton was thus scheduled only at the very end of the season, and O&FT cotton sales were delayed. All in all, GM cotton raised seed prices, complicated production, processing and certification and demotivated some farmers to continue with organic production.

An institutional crisis that had developed within the farmers union in Burkina Faso (UNPCB) for political reasons as well as the termination of a long-term and highly beneficial sales contract with the main buyer affected the farmers’ motivation and their adherence to the value chain.

In Mali, cotton sales and processing are concentrated within the parastatal Malian cotton company (CMDT). Therefore, the National Federation of Organic and Fairtrade Producers (FENABE, MoBioM until 2015) cannot engage and directly benefit from cotton sales. For two years, certified cotton was not sold at premium prices because CMDT had other marketing priorities. In this period, farmers suffered a combination of low yields and low sales prices. In addition, CMDT decided to gin organic cotton at the end of the season, which led to late sales of cotton and demotivated organic cotton farmers. Despite diverse efforts, the ginning schedule and cotton sales were out of the sphere of influence of the project and the producer organisation MoBioM.

In Kyrgyzstan, O&FT cotton sales are determined by the ability of the producer organisation BioFarmer to purchase cotton from farmers directly at the ginnery. Therefore, BioFarmer needed to access trade capital, which was not sufficiently and continuously available.

Economic impact
Besides having overcome debts, which is probably the main economic and social impact of the measures, all O&FT farmers together have benefitted from a total additional income of 11.2 million euros, or 107 euros per farmer and year, compared to conventional farmers. The calculation bases on the following parameters, which were defined and added up for each country and year. They account for the total certified cotton area of the three countries.

Yields: In Kyrgyzstan, O&FT cotton farmers invested in livestock, gaining access to farmyard manure they needed to maintain soil fertility and yields. Their average yields are comparable with conventional seed cotton yields (2 t to 2.5 t/hectare). In Burkina Faso and Mali, access to and application of organic manure or other fertilisers remained a challenge. In addition, conflicting interests prevented organic cotton from growing faster: the main business interest of CMDT and UNPCB is in the promotion of conventional cotton. Furthermore, GMO contamination in Burkina Faso led to a marginalisation of organic areas to less productive lands. As a result, yields of conventional cotton were 60 per cent higher (723 kg seed cotton/ha) than those of organic cotton (441 kg seed cotton/ha).

Sales prices: In Kyrgyzstan, the average price was 18 per cent higher for organic seed cotton (34.6 som/kg) than for conventional cotton (29.2 som/kg). In Mali and Burkina Faso, sales prices were around 60 per cent higher for organic cotton fibre (324 FCFA/t) compared to conventional cotton fibre (203 FCFA/t). These premium prices more than compensated the relatively lower yields. In addition, the farmer communities benefited from a total Fairtrade premium of 799,000 euros, or 5 euros (West Africa) and 28 euros (Kyrgyzstan) respectively per farmer and year.

Input costs are, on average, 73 euros/ha lower in organic farming compared to conventional farming, thanks to the abandonment of chemical pesticides, herbicides and synthetic fertilisers. Total savings in input costs amounted to 8.4 million euros from 2002–15, or 74 euros per farmer and year. Labour costs are not included in this calculation. Organic production usually requires more labour input during the vegetation period, whereas, because of the higher yields, in conventional cotton production, manual labour is higher during the harvest period.

Social and environmental impact
Despite the considerable economic benefits, social benefits were the primary reasons for farmers to adopt organic practices. These include better health thanks to the abandonment of harmful production inputs, as well as access to productive lands and cash crop production for women in West Africa. Other benefits were reduced production risks thanks to enhanced soil fertility and diversification, access to rural advisory services, and markets for rotation crops. The benefits from the production of rotation crops have been so compelling that numerous organic farmers have limited cotton production in favour of more beneficial organic food crops, such as vegetables or sesame. In addition, the renunciation of an estimated 6,000 t of chemical fertilisers led to a calculated reduction of around 11 million t of CO2 emissions in the period between 2002 and 2015.

Producer organisations play a key role in value chains. Today, they have the capacities to offer rural advisory service for organic agriculture, ensure input supply, and manage internal control systems as well as organise external certification. BioFarmer in Kyrgyzstan reached a self-financing of 100 per cent based on sales margins, while the producer organisations in Mali and Burkina Faso cannot benefit directly from cotton sales because of the persisting sales oligopolies of the cotton companies. What key lessons can be derived from this cotton experience?

SECO and Helvetas support to the O&FT cotton value chains in Mali and Kyrgyzstan ended in 2016, while the Burkina Faso project runs until mid-2017. Owing to the growing market demand for O&FT cotton, the improved competences of the producer organisations, the alluring benefits for farmers, as well as the international community’s increasing interest in supporting organic agriculture, there is a high probability that the business of these three O&FT cotton value chains will be long-lasting and outlast the completion of SECO and Helvetas’ engagement.