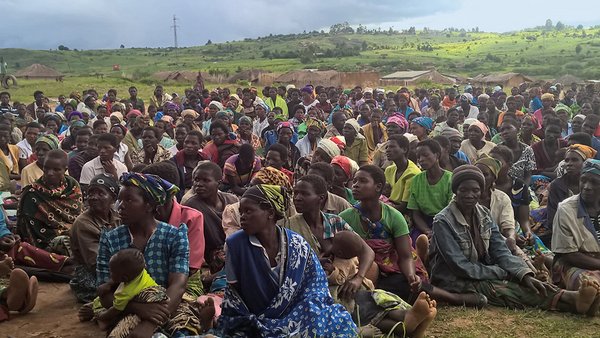 A community meeting to verify the households to be included in the UBR, Dedza District, Malawi.
Photo: © Mc Neil Mhango

Social protection programmes are increasingly making use of integrated IT solutions in order to register and reach beneficiaries. The benefits of these solutions and how their integration into comprehensive systems can be accomplished while maintaining government ownership can be learnt from the case of Malawi.

Social protection interventions need to capture, store, and process large amounts of data in order to identify eligible beneficiaries. Malawi’s Social Cash Transfer Programme (SCTP), for instance, collects a variety of information on households in order to determine who is most in need of support. It gathers information on the type of housing materials used (e.g. the type of floor, roof or latrine), whether the household owns land and how many meals its members eat per day, among other things. The data are kept in an electronic management information system and can be accessed by various users; this system also uses an algorithm to select beneficiaries.

But the SCTP is not the only social protection programme in Malawi. In fact, it constitutes just one of the five pillars of the country’s social protection system; the other four are the Public Works Programme (PWP), the School Feeding Programme, Village Savings and Loans Associations and Microfinance. Furthermore, there is a large Farm Input Subsidy Programme and an annually recurring emergency response for food insecure households operating in the periphery.

The PWP, which provides employment to ultra-poor households, has similar eligibility criteria to those of the SCTP. Nevertheless, it maintains a separate data collection process. What if both programmes could access the same database to select their beneficiaries? This is the idea behind the so-called Unified Beneficiary Registry (UBR), which was developed by the Government of Malawi with support from GIZ and other development partners. The UBR is designed to contain data on at least the poorest 50 per cent of the Malawian population, also capturing, despite its name, households that are not beneficiaries of any programmes.

Following broad-based consultations with various government and other development stakeholders, the first step in creating the UBR was to develop a software platform for the registry. Donors often task external consultancies with the development of software for their partner countries. The drawback is that the government has little ownership of the project and is often unable to take over implementation and maintenance once it is completed.

Therefore, a different approach was followed in creating the UBR. The Government of Malawi put together a taskforce comprised of IT experts from different line ministries and government agencies involved in the implementation of the Malawi social protection system. This taskforce was trained in the latest database technologies and then supported in the development of the software by IT specialists from the consultancy firm Development Pathways. To enable the group to work together, a collaborative workspace was rented in Malawi’s capital, Lilongwe, and the software was developed in two ‘sprints’ of several weeks. Thus the collaboration successfully brought together local expertise and international experience. In the early stages of its operation, Development Pathways will provide technical support for the UBR, but is expected to eventually leave the project entirely in the hands of the Government.

As the software is now ready for use, the collection of data for the UBR is currently underway in 10 out of Malawi’s 28 districts, with the rest to follow shortly. Gathering data from half of Malawi’s households is no small task. Other countries that have implemented such a registry already had programme databases that could be merged. If households were registered in two different databases, the two entries could be matched using national IDs to avoid double registration. In Malawi, no national ID system is currently in place (although one is being introduced), which means that the existing programme databases could not be used for this purpose. Hence, in Malawi, rather than the registry comprising data from individual programmes, data is being newly gathered for the registry and will be shared with the individual programmes.

The government is heavily involved at all levels in both the process of data collection and in the development of the software. District staff are being prepared to train the lower-level ‘Traditional Authorities’. Communities are then sensitised and elect a committee to create a list of households to be included in the registry. Tablets or paper-based questionnaires are subsequently used to collect data on these pre-identified households. Based on the information collected, households are ranked according to their level of poverty. This ranked list needs to be approved again by the communities before it can be used by the different social protection programmes, should they desire to base their targeting on poverty ranks. However, it is entirely up to the different programmes to define their targeting criteria and to extract the relevant data from the UBR.

Once the data is collected, it can be used by the different social protection programmes, which are thus freed of the burden of collecting their own data. Through this centralised system, programme implementers can also gain an overview of which households are receiving which intervention(s). On the one hand, this avoids unwanted overlaps. Households already targeted by one programme might not be in need of another. On the other hand, a policy-maker might also want to direct several programmes at a particular category of households in order to address multiple needs. And, if a household ceases to be eligible for one programme, it can easily be assigned to another. For instance, if an able-bodied member of a household that participates in the PWP becomes unable to work through illness or injury, the household might instead receive a social cash transfer.

Not a one-way street

Data flows from the UBR to individual programmes, which have their own information systems that transform the data based on their needs. In turn, the programmes feed information on who they have reached back to the UBR. Thus, the UBR collects information on who was meant to benefit from a programme, as well as on who actually benefited. After all, eligible households might fail to participate due to implementation issues or lack of access to the programme, for example.

This feedback loop opens up the possibility to monitor the success of a programme, or combination of programmes, through the UBR. Policy-makers can potentially trace which programmes – by themselves or in conjunction with others – were successful in achieving which objectives (e.g. alleviating poverty, improving food security or opening up new ways of making a living). For example, a policy-maker might want to link social cash transfer beneficiaries with a local savings group to enable them to access financial services and financial literacy training. The local group, by allowing a beneficiary to save and access credit, can then facilitate his or her access to funds in times of crisis. By being able to monitor these linkages, the UBR improves accountability and the possibility of learning from programme implementation.

The UBR can be used for more than the harmonisation and streamlining of social protection programme targeting mechanisms. Malawi is envisioning a link between the UBR and a planning and co-ordination tool for community-level projects based on geographical mapping software. The GIS tool will replace current paper-based systems and allow communities to create, for example, village-level action plans (VLAPs) to generate local assets. The PWP can take up these plans and support them by providing additional labour. The UBR also stores the location of households so that they can be assigned to public works projects in their vicinity.

Geographical data can also help harmonise payment mechanisms for the different programmes. Through the GIS tool, programmes will be able to identify areas where the need for a payment point for beneficiaries overlaps with that of other programmes.

In sum, the UBR provides a much-needed link between the different social protection programmes in Malawi by allowing for the harmonisation of different implementation procedures and avoiding duplication.