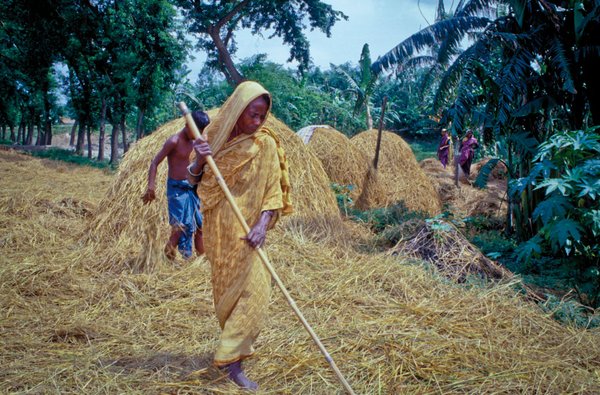 A women gathering dried reeds to feed animals in a farm in Bangladesh. To help poor households the country has set up food-based safety-net programmes.
Photo: ADB

In Asia, grain prices continue to reach high levels. However, the impact of international trends varies from country to country. Limited supply response to the price hike points to structural weaknesses in the food system. Scarcity of natural resources and the effects of climate change could further aggravate long-term price developments.

The global food price level in July 2011, as measured by the World Bank Food Price Index, remains at the high value that is close to its peak in 2008, and international wheat and maize prices in August 2011 are roughly double the levels in June 2010. In contrast, the international price of rice stays at a high level but is still well below its historic peak in 2008. This current price development is quite different from the episode of the 2008 food price crisis, when the rice price hike was leading the global food price increase, fuelled by trade restrictions imposed by major Asian exporters.

Looking at domestic markets in Asia, the prices of staple crops in many countries are staying at much higher levels than a year earlier, and have recently started increasing again, following the upward trend of international prices. However, the extents of global grain price transmission to domestic prices significantly vary across countries, and rice price movements in particular show more variance than wheat prices in the region (see Figures on page 29). This is not surprising, given that the internationally traded rice accounts for only seven percent of global production.

Substantial differences in the local grain price changes are observed even within the same country. For instance, the year-on-year increase in retail prices of rice in India ranges from 7.9 percent in Chennai (state of Tamil Nadu, in the country’s Southeast) to 18.9 percent in Patna (state of Bihar, in north-eastern India). Similar ranges of price divergence are also observed for rice and wheat in other countries. This reflects, other than quality difference and potential time lag in price transmission, the state of fragmented domestic markets and disconnections among marketing channels within a country. Moreover, the local food price does not constitute the price of raw produce alone but also reflects inefficiency in distribution logistics and marketing channels. For example, a recent study commissioned by the Asian Development Bank (ADB) in Bangladesh, China and India shows that a half or more percentage of a retail price of food in urban areas comprises the costs of wholesale logistics, processing and retail marketing. With investments in the value chain to increase its efficiency and the establishment of a conducive environment for service providers to ensure healthy competition, these transaction costs could be substantially reduced, which, in turn could provide downward pressure on domestic food prices.

As food bears a large weight in the consumer price index in many of Asia’s economies, the food price increase induced food price inflation of about ten percent within the first seven months in 2011, and directly imposed additional financial burdens on food buyers and wage earners for their basic needs. The impact is severe for poor households in Bangladesh, Indonesia, and the Philippines, for example, who spend as much as 63 to 69 percent of their income on food. What people eat defines the extent of impacts from global food price increases. While the current global wheat price has directly affected Central and West Asia, the dominance of rice consumption is shielding other regions in Asia from harsh impacts that the ongoing global food price increase would otherwise impose: Based on the compositions of average daily caloric intake, rice is the major staple food in Southeast Asia, and wheat in Central and West Asia, while the two crops are equally important in South and East Asia. Countries with high dependency on imported food are immediately affected by rising import bills and a worsening of the current account balance.

Simulations of the impacts of food price hikes on poverty in the latter half of 2010 predict that the adverse impact on poor households significantly outweighs the benefit of higher prices for producers. The World Bank has estimated that 44 million more people fell into poverty due to the price hike. In reality, though, the balance between adverse impacts on food buyers and what food producers gain may be quite diverse, particularly in populous countries like China, where a variety of net producers/buyers of various scale co-exist. Hence the impact of high food prices is subject to empirical research based on expenditure and nutrition data in each country.

In principle, the food price increase should also benefit food producers by increasing their revenues. However, the fact that the food price has recorded a new spike just three years after the 2008 food price crisis indicates that supply response to price has not been elastic enough. The limited response can be explained by binding structural constraints in the food production system. Small farmers are dominant producers in Asia, and many of them lack adequate access to inputs and produce markets, irrigation, financing means, information and knowledge on farming and resource management. At the household level, land size is typically small and fragmented due to population pressure, and not many small farmers generate excess produce for sale. Many farmers are also net food buyers who are directly exposed to food price volatility: Without access to a storage facility, farmers typically sell their food crops right after harvest at low prices, and buy the food crops for their consumption at the peak price right before the next harvest.

In an attempt to shield domestic markets from a transfer of the international food price hike, governments in Asia have largely provided self-sufficiency measures. An internal survey on domestic policy responses of ADB’s developing member countries to the food price hike conducted in early 2011 confirmed that many developing countries in Asia had increased grain stock piles, consumer and producer subsidies, and investments and incentives for stimulating staple production. Some countries (e.g. Bangladesh, India, Indonesia and Philippines) are also running food-based safety net programmes, for many of which, however, the effectiveness in targeting the poor and the fiscal burden over the longer term are of major concern. Some countries where food spikes have fuelled inflation, such as China, India, Indonesia, Korea, Malaysia, Taipei, China and Thailand, have introduced a tighter monetary policy. As a measure to stimulate domestic production, a number of countries (e.g. China, India, Indonesia, Pakistan, Philippines and Thailand) have raised government procurement prices for major food produce. The recent procurement price increase for rice in Thailand has set a higher ground for international prices of rice.

The food security challenge over the long term

Apart from food price volatility, food security in Asia faces grave challenges over the long term. Prevalence of malnourishment among children in South Asia is the highest in the world, and household expenditure data suggests that addressing malnutrition requires not only income increase but also enforcement of better nutrition intake for poor households. For example, household expenditure data of populations that earn one US dollar a day in Indonesia, Bangladesh, and India shows that in addition to purchasing food, the poor families spend substantial portions of their income on festivals, alcohol and cigarettes. With extra income, they would not necessarily be buying extra food, and their tendency to spend more on tasty food that is not necessarily nutritious is well-documented. Although increase in global demand for food crops over the last five decades has been met largely by growth of crop yield, not by expansion of acreage, the pace of productivity growth has become stagnant lately. While existing production gaps within Asia present potential for productivity enhancement with existing technologies, their dissemination is difficult under diverse agro-economic conditions, and empirical evidence informs that some incentive mechanisms need to be in place to nudge farmers to adopt better farming practices. Moreover, in the absence of large investments for transformational productivity improvement, its effective dissemination and supporting infrastructure, growing scarcity of land and water is likely to stretch the demand-supply gap of food over the long term, causing the food price to rise. And food price volatility is likely to remain as series of shocks are expected from frequent extreme weather events, such as floods, droughts, and pests, which in turn might also trigger trade restrictions of large market-players.