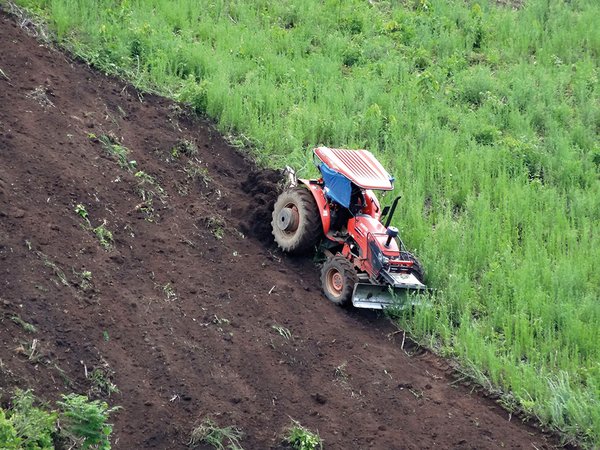 Concentrating on cash cropping often leads to non-sustainable farming in which processes such as soil erosion are exacerbated.
Photos: GRET

Secure tenure of farming and forest land is increasingly recognised as an important factor of household food security and nutritional status. This is borne out by a study by the Laotian Land Issues Working Group. It demonstrates mutual impacts, how government land-related policies affect the factors involved, and who the winners and losers are.

Maintaining access to land and natural resources, such as forests and fisheries, is a critically important dimension of food security for the rural poor of developing countries. The rural poor have few assets apart from land and common resources. Livelihoods tend to be subsistence-based, reliant upon cultivating cereal crops, foraging wild forest products, hunting small game, and fishing in nearby rivers and streams. The little income that they do generate mostly comes from selling the crops they produce or natural forest products they collect – employment and business opportunities in rural areas far from towns and larger villages are mainly land-related. Secure access and control over land and natural resources is a major determinant of rural people’s access to food, whether directly through subsistence or indirectly with income used to purchase food items. 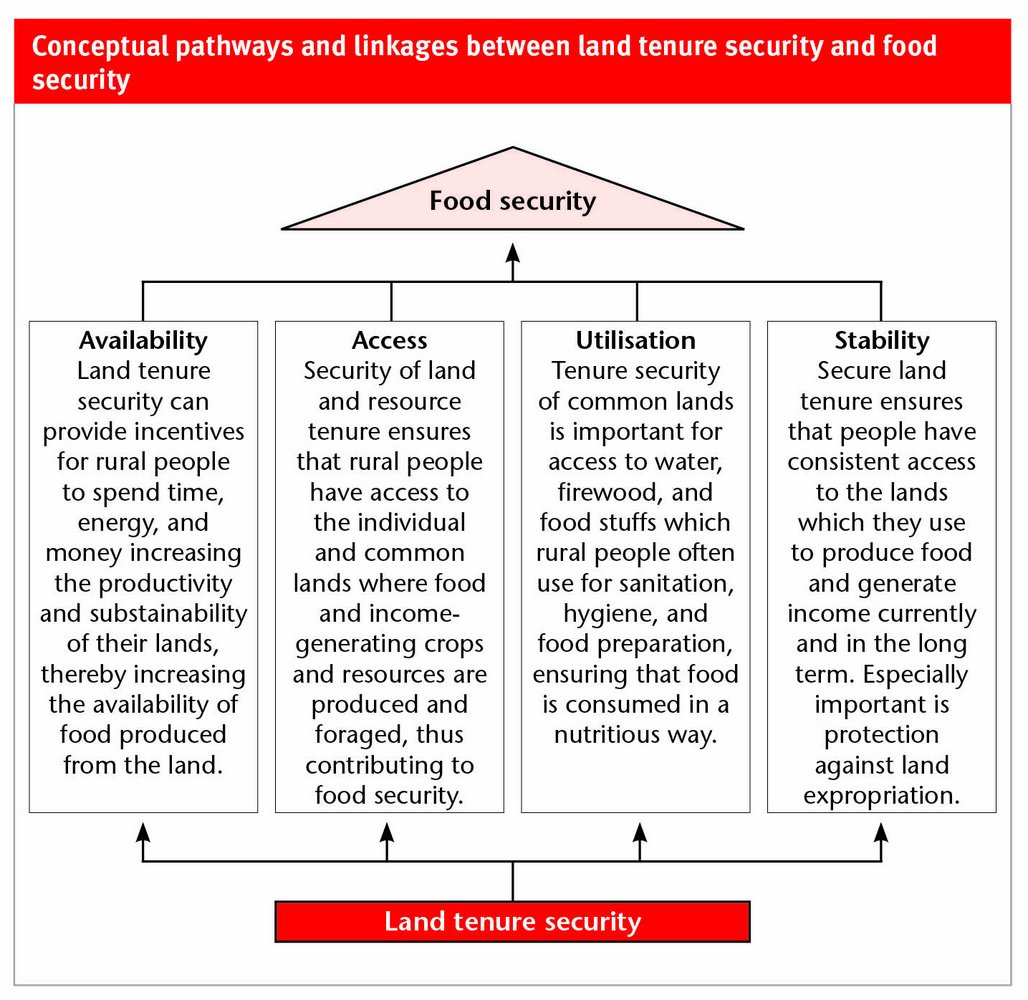 The situation in Laos

Laos showed mixed results in its efforts to combat hunger and achieving Millennium Development Goal 1 in 2015. As figures from the United Nations Development Programme (UNDP) reveal, while the country reached the target of halving the proportion of hungry people (18.5 % in 2015 against 42.8 % in 1990), Lao PDR is off track regarding the target of reducing underweight and stunting; in 2012, 44 per cent of the under-five-year-olds were stunted and 27 per cent underweight. Considering the significant challenges to meet the objectives to alleviate hunger, the government declared nutrition a priority issue and reaffirmed its commitment to fight hunger and undernutrition through the launch of the National Zero Hunger Challenge in May 2015.

In addition, land tenure in Laos is insecure. Formal land registration and titling is not sufficient for strengthening people’s tenure security and is mostly limited to urban and peri-urban areas. Communal land titling has been extremely limited, as only two communal land titles have been issued throughout the country so far, while this is recognised as key to the production and collection of food and other resources.

Customary land tenure systems are commonly used by rural people, based upon local, largely village-level, rules of land and resource use. While such systems are appropriate for local land governance, they are not often understood or recognised by outside actors, such as government officials and policy-makers, as representatives of legitimate land rights. Concurrently, Lao people’s access to land has declined over the past decades due to a number of social, political, and economic forces. Land and forest policies have been particularly problematic. They were aimed at formalising and securing land tenure and improving agricultural productivity, but often had the effect of reducing farmers’ access to agricultural land, resource-rich forest lands, and other lands for raising livestock.

Food security exists when all people, at all times, have physical, social and economic access to sufficient, safe and nutritious food that meets their dietary needs and food preferences for an active and healthy life (UN Committee on World Food Security, 2014). Land tenure is secure when it is socially and legally protected against the actions of others, particularly forced expropriation or eviction (FAO, 2012)

In Laos, there is evidence that populations with lower access to or ownership of land are more likely to be food insecure and face problems of malnutrition. Farmers report that serious and chronic shortages of food result from a lack of land and common resources, in combination with poor and decreasing soil quality all of which is attributed to interrelated problems: increasing population, shortened rotational cycles in upland fields, forced displacement, banning of swidden systems, economic concessions, and cash cropping and associated debt.

In 2006, the Asian Development Bank (ADB) and the National Statistics Center carried out a study which captured the perspectives of the rural poor concerning their poverty and its root causes. Villagers throughout the study sites identified limited access to cultivation land, especially for rice cultivation, to be the primary cause of poverty. They additionally reported that they lacked land as a result of attempts by official programmes to re-allocate land use and ownership, to consolidate villages, and to reduce shifting cultivation, which led to population pressure and a scarcity of land resources. The implementation of these policies demonstrates a lack of secure access and tenure to land in the surveyed villages. Another study by Annim and Imai (2014) showed the importance of land size and ownership for nutrition. It demonstrates that the majority of Laotian children under five years of age who are stunted, wasted, and underweight belong to households with less than two hectares of arable land.

What is the impact of the Government’s programmes and policies?

Two major government policies had a large impact upon land, forest, and resource access in Laos: the Land and Allocation Program (LAP) and the resettlement/relocation policies. The LAP was intended to strengthen land tenure security, intensify agricultural production, and conserve forested areas by delineating village boundaries, zoning agricultural and forest lands, restricting swidden cultivation, and issuing temporary land use certificates. Ducourtieux et al. (2005) found that although the programme had strengthened tenure security for wealthier, lowland paddy farmers, it had significantly reduced access to land for upland, swidden farmers, whose fallow lands were zoned as forest lands protected for conservation and who were left with an inadequate amount of fallow land for swidden production.

Government relocation policies have had a significant impact upon food security by relocating villages to areas that offer less land and natural resources than their former villages. The lack of available land is largely due to the concentration of more people in larger settlements – in particular, there is a lack of land left for new arrivals. Relocation can be divided into two broad classes: relocation as a result of government rural development and poverty reduction strategies and relocation due to public and private sector development projects. Generally, research on the former type of relocation has shown that the negative impacts upon livelihoods outweigh the positive ones, especially in the first years after resettlement. While positive impacts include improved access to education and health services, wage labour opportunities and market access, negative impacts comprise disease outbreaks, reduced access to land and resources, lower nutritional levels, reduced social cohesion, and increased vulnerability to human trafficking and new forms of drug addiction.

Large-scale land investments, particularly those that have resulted in the expropriation of farmers’ agricultural and forest lands, have had negative impacts upon smallholding farmers. Throughout Laos, land concessions have been granted at a rapid pace over the past 15 years. They jeopardise food security by leading to a loss of agricultural lands and forests that households rely upon for food and income. Lands viewed as high-value by the Government, such as rice paddy, cash crop lands, and primary forest, are in some cases cleared by concessionaires, but the majority of land cleared tends to be swidden fields and fallow lands or secondary forest, which the Government believes are less significant, even if they are critical to local livelihoods and food security. The loss of communal forest lands has a particularly negative impact for women who in many villages do most of the work collecting Non-Timber Forest Products (NTFPs) and as a result of losing such land have to travel further and spend more time searching for NTFPs in other areas. While many projects in Laos provide some form of wage employment for villagers that have lost land, studies have shown that jobs are few, infrequent, inconsistent over the long-term and low-wage. Inadequately planned economic land concessions for mining, hydropower and agriculture (e.g. banana plantations) and industrial tree plantations projects have decreased villagers’ access to land and negatively impacted their food security.

“We have limited land for production. We do not rotate the fields as before. We keep using it over and over. The land is losing its quality.”
A farmer from Oudomxay

“We miss the rich soil which was our priceless inheritance.”
A Champassak villager

Fullbrook (2010) has demonstrated that throughout Laos, a food security paradox has emerged in that the country’s development policies have emphasised the extraction and production of resource commodities over rural livelihoods and environments, which has threatened food security, particularly when land tenure security is jeopardised.

Agricultural commercialisation of rural areas has become a central component of the Lao Government and development partners’ plans and policies for rural development. It has evolved into and will continue to be an important part of the Lao rural landscape. In Laos, like in many other developing countries, the households that engage mostly in commercial agricultural schemes have more natural, financial and physical assets, and in particular they have access to more land to convert to cash crops (Wright, 2009). Limited land prevents the rural poor from engaging in commercial agriculture, and in cases when they do so, they may become over-dependent upon cash cropping, which is risky should the farmer be unable to sell the crop at a decent price – or sell the crop at all – and be left with little to eat. Besides, it is found that cash croppers have to resort to overuse of pesticide, and that cash-cropping causes other adverse impacts on health, soil quality (e.g. erosion) and water pollution, including the diminution of Non-Timber Forest Products (NTFPs) and other resources.

What ought to be done?

Based upon the findings of the study, LIWG promotes strengthening food security by enhancing and protecting land tenure security. Here, it points to two crucial factors:

The Land Issues Working Group (LIWG) is a civil society network that has existed in Lao PDR since 2007. The group was established to enable members to inform one another about land matters, especially in view of increasing land-related foreign direct investment (FDI) projects and concerns over their negative impacts on the livelihoods of rural communities, as well as to develop common initiatives to address some of these issues. The article centres on a literature-based study elaborated by the LIWG to provide recommendations for policy-makers.