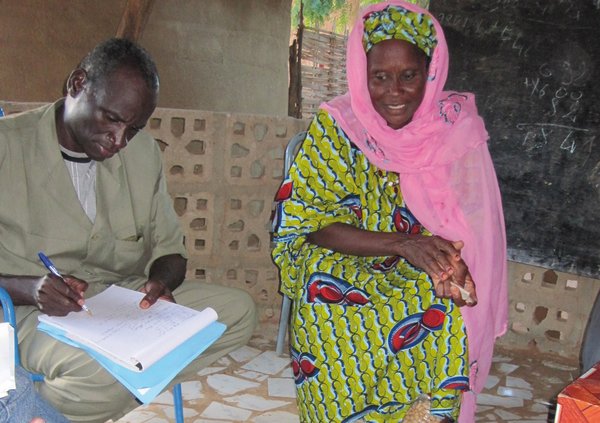 No chance for aflatoxins

Food contaminated by aflatoxins is one of the most serious consequences that poor post-harvest management can have. In May 2004, for example, numerous fatalities were recorded in Kenya that could be traced back to the consumption of maize poisoned by the fungus. The Aflacontrol project sought to provide empirical evidence of the cost-effectiveness of aflatoxin risk-reduction strategies along maize and groundnut value chains in Africa and to understand what prevents adoption of these control strategies.

During the Aflacontrol project (see Box below), run between 2009 and 2011, maize samples were collected each month before harvesting, in storage (15- to 30-day intervals) and in the markets from Kenya’s Upper Eastern (Embu/Mbeere), Lower Eastern (Makueni, Machakos) and South Western (Kisii/Rongo/Homa Bay) regions, and aflatoxin prevalence levels were analysed. In the course of the analysis, Mahuku et al. (2011) found that aflatoxin prevalence in Kenya was much more widespread and also higher than expected. While Eastern Kenya is where the highly publicised deaths associated with aflatoxin occurred in 2004, sampling in the different agro-ecological zones also found aflatoxin levels in farmers’ fields that were above the legally allowed 10 parts per billion (ppb) in the Western parts of Kenya. And the proportion of maize with aflatoxin levels greater than 10 ppb was higher in farmers’ stores and markets, suggesting that current maize drying and storage practices are inadequate in minimising exposure to aflatoxins.

Groundnut samples were also collected at the same intervals from the Kayes, Kita, and Kolokani regions of Mali and aflatoxin prevalence levels analysed. In the course of the analysis, Waliyar et al. (2011) found levels greater than 20 ppb in over 33 per cent of the fields across the study regions. Moreover, like in Kenya, aflatoxin levels increased in storage and in the markets, indicating, as with maize, the inadequacy of current groundnut drying and storage practices.

Socio-economic surveys were implemented in households and communities and with traders from the same regions, providing baseline information on the role of maize in households’ livelihoods and people’s knowledge, attitudes, and perceptions surrounding aflatoxin. The surveys also revealed how knowledge, attitude, and practice indices influenced household practices and their willingness to pay for technologies that could reduce aflatoxin prevalence as well as consumers’ willingness to pay a premium price for maize or groundnut certified clean from aflatoxins.

In Kenya, about half those surveyed reported taking maize home to dry on tarpaulins. Around 30 per cent left maize uncovered in the fields. Only few used storage structures. In Mali, nearly half of those surveyed dried groundnuts in large piles in the field. As in Kenya, few Malian farmers used storage structures. Among those that did, traditional granaries were most popular.

Basic knowledge of aflatoxin was extremely low in both countries (Narrod et al., 2011). In Kenya, households in the drylands, where aflatoxicosis outbreaks occurred in 2004, had a higher perception of risk, as expected, but low knowledge on safety attributes and the necessary measures to minimise exposure to aflatoxin. These observations suggest that a lack of understanding of the problem contributes to poor control of aflatoxin in the region. The survey also showed that most farmers who had heard of aflatoxin obtained that information via local language radio and extension workers. Research findings indicate that being involved in selling maize has no effect in terms of action to reduce aflatoxin risk in Kenya. For Mali, those households that were more market-oriented (i.e. sold more than 25 % of produce) were more likely to take action to ensure better crops and use storage facilities to mitigate risk.

The survey work also looked into the influence of behavioural factors on individual adoption of strategies to reduce aflatoxin risk. Tiongco et al. (2011) conclude that in both Kenya and Mali, producers with more assets were hypothetically more willing to pay for aflatoxin risk-reducing technologies. And in Kenya’s drylands, where outbreaks of aflatoxicosis had occurred, respondents were more willing to pay for improved seeds, tarpaulins and metal silos for drying and storing grain compared to other regions. Further research is needed into people’s willingness to adopt risk-reducing strategies, perhaps through randomised experimental trials to study behavioural responses to different risk-reducing strategies.

Mycotoxins can neither be smelled nor tasted. So testing is needed to determine whether the levels in a product exceed the acceptable safe threshold. Analyses of data collected with an experimental auction (De Groote et al., 2011) demonstrated that consumers were willing to pay a slight premium for maize labelled “tested”, and that the premium was positively associated with increased schooling and was higher in affected regions. In Mali, Tiongco et al. (2011) found people also willing to pay a premium for groundnuts tested and labelled free of aflatoxin.

Which measures to recommend?

Data on the effectiveness of implementing control measures in the African situation when the Aflacontrol project began was limited. Therefore, an expert elicitation was administered to an expert panel to provide guidance on the potential effectiveness of selected aflatoxin risk reduction measures for maize and groundnuts. It was combined with cost data on different storage methods from unpublished CIMMYT survey data and estimated costs of biocontrol from IITA to conduct an analysis of cost effectiveness (see Narrod et al. 2011). The findings revealed a natural order to the value of each option to overall risk reduction. The differences depended not only on stated costs and revealed effectiveness, but also on the lifespan of the option considered (i.e. how often it has to be re-purchased). For instance, for maize, a few low-cost options that need to be replaced on a regular or semi-regular basis, such as drying on tarp, were determined to be cost-effective, as were more expensive options with longer life spans, such as plastic and metal silos. Uncertainty about how often biocontrols were needed resulted in their application only showing up on the frontier if they were not required each year. Findings from the cost-effectiveness analysis need to be interpreted with care until good experimental data on the effectiveness of various measures in the African situation are available and the lifespan of the various methods is established to get a true understanding of their costs.

Efforts are now underway with the Aflacontrol team members, Partnership for Aflatoxin Control in Africa (PACA), the CGIAR Research Program on Maize and regional trade organisations such as COMESA to build on the Aflacontrol project and other initiatives. These efforts seek to understand the effectiveness of existing measures, update cost-effective analysis and implement a study to improve the availability of safe maize through implementation of science-based interventions to reduce aflatoxin and fumonisin (another group of fungal toxins) as well as building local capacity to reduce mycotoxin exposure. Also, efforts are underway to work with African nationals in areas such as educating families, farmers and governments about health risks and what reducing them would cost, lowering the risk of contaminating of maize by adopting appropriate practices, building local capacity to support reducing mycotoxins in agricultural produce and providing tools for locally-driven policy reform ensuring food safety and trade opportunities in the region. Investments need to focus on providing appropriate information and education to different stakeholders as well as an enabling environment to build local capacity.