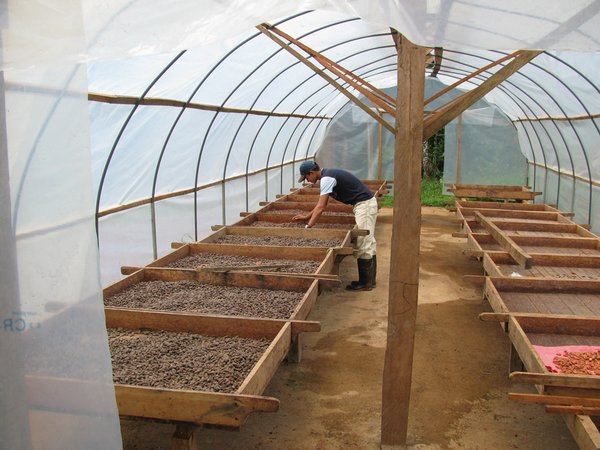 Nicaragua: Cooperatives at the crossroads

High hopes are vested in agricultural cooperatives when it comes to establishing export-oriented value chains, particularly for guaranteeing the socio-economic participation of farmers on a lasting basis. Looking at the example of cocoa production in Nicaragua, this article describes the role that cooperatives can play in this process, but also the limitations that they encounter.

With an area of 130,000 square kilometres and around 5.9 million inhabitants, Nicaragua is the largest country in Central America. Fifty percent of the population in rural regions live in poverty. Given the country's predominantly agrarian structure, agriculture is the most important sector of the economy. Nicaragua depends on just a few export products – coffee, meat, sugar, gold and groundnuts – which makes it vulnerable to fluctuating global market prices. Where soil fertility has been depleted by inappropriate farming practices and over-exploitation, poor yields and low revenues are a problem. In practice, there are virtually no alternative options for farmers as individuals to generate higher agricultural income from their farms.

Since 2002 German development Cooperation has worked in collaboration with the German confectionery company Ritter Sport to support cocoa production in the buffer zones of Nicaragua’s biosphere reserves. The aim is to increase family income for the rural population. In Nicaragua, however, relevant interventions combined with the introduction of innovations often fail due to a lack of farmers’ organisations, without which farmers are cut off from advisory services, education and training, markets and loans. The proposition is therefore to promote cocoa production in tandem with a cooperative form of self-help organisation (SHO). Cooperative SHOs make it possible for farmers to access institutions and markets in the rural economic system (factor, product and financial markets; legal rights to the ownership, disposition and use of land; education, training and advice, etc.). What the chocolate manufacturer hopes to secure from the Cooperation is a long-term supply of high-quality cocoa.

Back in the 1980s Nicaraguan cooperatives were officialised to implement the state’s agricultural reform policy and assigned a role in state land distribution. In contrast, their main function since 1990 has essentially become that of a para-economic enterprise supporting small family farms. This has changed the emphasis of cooperative self-help, which is rooted in the duality of an economic enterprise coupled with social and public-benefit functions. The economic aspect has taken primacy from the social aspect. Amid changing macro-economic conditions, this had become a necessary transformation. Cooperative enterprises can only survive in the market if they can assert themselves in competition with private-sector companies. Therefore modern cooperatives, in Nicaragua as elsewhere, define themselves by the criteria of the International Cooperative Alliance (ICA):

“A cooperative is an autonomous association of persons united voluntarily to meet their common economic, social and cultural needs and aspirations through a jointly owned and democratically controlled enterprise.”

This current ICA definition of a cooperative is supplemented with seven cooperative principles. However, certain of these are in contradiction with the reality of cooperative SHOs in Nicaragua:

While these contradictions do not apply uniformly to all cooperatives, the author has observed their existence in a variety of manifestations in the agricultural sector over the past twenty years.

Cooperatives within the cocoa value chain

Although the use of the cacao plant for family subsistence in Nicaragua goes back more than a thousand years, the production of quality cocoa for export as part of a value chain is an innovation for the farmers. Because they lacked expertise in cocoa production, processing and marketing, in the past most of them only produced small quantities of low-quality cocoa which achieved correspondingly low prices on the market. Nicaraguan cocoa has extremely good quality potential, however, thanks to its high proportion of Criollo genes. The opportunity to export it at decent prices was created by the involvement of the German chocolate manufacturer in the framework of a public-private partnership (PPP). At the moment, cocoa production is in the hands of around 6,500 family farms, many of which are affected by poverty. The majority of cocoa farmers have organised themselves in around thirty self-help organisations.

Success in promoting the members of small-farmer cooperatives as stakeholders in cocoa production is constrained by obstacles in various areas. These include:

Skill-level of members to run cooperatives and develop organisational structures: High rates of illiteracy among cooperative members mean that most are excluded from actively helping to run their SHO. As a result, it can be difficult to fill key governance roles, on the supervisory board for instance. Many cooperatives suffer from management that is less than efficient and transparent, and this in turn prevents members from exercising adequate control. Furthermore, the inexperience of cooperative members often militates against attempts to operate an owner-run SHO as a businesslike enterprise. It also creates the conditions for corruption within the enterprise.

Venture capital accumulation and access to borrowed capital. The overwhelming majority of cooperative companies have an inadequate capital base. In part, this happens because members have not, or not fully, paid up their shares in the company, and the board fails to call in the outstanding share capital out of misguided sympathy. Capital is thus largely acquired via donations and subsidies from international Cooperation and civil society, which contradicts the cooperative principle of autonomy.

Another possibility for capital accumulation would be the redistribution of profits to members. However, this possibility is ruled out by the minimal profits of many cooperatives. Moreover, in past instances, profits have been spent or diverted by functionaries under the guise of intransparent business policies. Cooperative enterprises without adequate capital are forced into heavy borrowing, which cannot usually be serviced by the private banking sector due to a lack of collateral. As a consequence, cooperatives have to seek finance in the informal sector, which is only possible at high rates of interest. The other real option for external financing consists of supplier and buyer loans provided by business partners within the value chain.

Access to markets for different cocoa-quality segments. The cooperatively-organised cocoa farmers have very little experience of collective marketing or any comparable entrepreneurial processes. This hinders the development of the necessary quality consciousness among producers and the establishment of long-term business links between cooperatives and market partners.

These problems raise costs or eat into the revenues of cocoa producers and lead to instabilities in their cooperatives. A further problem of many cooperatives in the cocoa sector is that their establishment goes back to an externally directed process, which has a negative impact on the members’ sense of “ownership”. In the long term this inhibits the members’ identification with their company, which in turn is detrimental to participation. Added to this are economic conflicts of interest between members and employees of the cooperative.

... and responses
In order to build competence in the cocoa sector, Deutsche Gesellschaft für Internationale Zusammenarbeit (GIZ), the Deutscher Genossenschafts- und Raiffeisenverband (DGRV, the German Cooperative and Raiffeisen Confederation) and other training and upgrading institutions are supporting the cooperatively-organised farmers. However, these programmes are constrained by the lack or ineffectiveness of state institutions, the members’ inadequate basic training and their sometimes limited motivation.

Market access for high-quality cocoa from Nicaragua is now possible through the partnership with the German chocolate manufacturer – with the support of international Cooperation. The buyer pays a price for the (organically produced) cocoa that is about 15 percent higher than the international going rate. The real advantage for the farmers is the sale of the cocoa via the value chain: as a high-quality niche product, the cocoa is mixed with conventional cocoa varieties that sell for much lower prices, creating a win-win situation for the organised cocoa producers and the chocolate manufacturer.

Is all the effort worthwhile?

In view of the numerous problems, it is justifiable to question how worthwhile it is to promote cooperatives in the value chain. On that point, it must be noted that the production of high-grade cocoa by non-organised farmers is more or less unfeasible. Quality cocoa requires a technically flawless fermentation procedure, something that is impossible on the individual farms. In Nicaragua there are no private service providers who can take charge of this aspect. Nor are there enough private entrepreneurs who will constantly buy up the raw product. International cocoa buyers require trading structures organised on a long-term basis, which cooperatives can offer, whereas non-organised farmers cannot. All this gives cooperatives a quasi-monopolistic justification of their existence to support the introduction of the cocoa value chain. However, their existence is precarious due to the duality of their enterprise, the lack of any culture of cooperatives in the country, and the extreme educational disparities of their members; and all the more so when the time comes for GIZ to withdraw as the supporting structure. Having been created to solve an immediate problem, cooperatives in Nicaragua must now demonstrate to members, employees and trade partners within the value chain that they can also be efficient, and hence indispensable, in the long term.