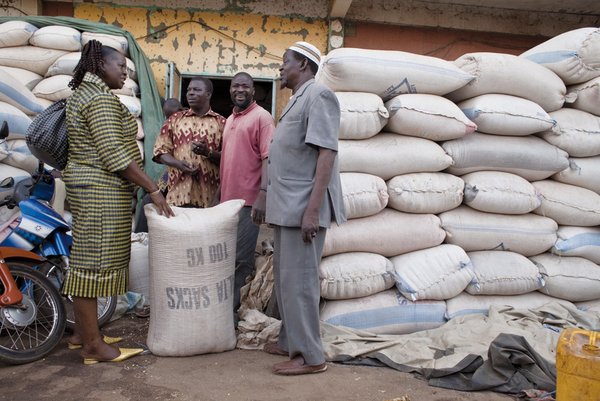 Market liberalisation in the 1980/90s brought about fundamental changes to marketing structures in Africa, creating new opportunities but also, often, making it more difficult for smallholders to access markets.

Prior to the late 1970s to early 1980s, the state dominated agricultural marketing systems in most African countries. State-owned grain marketing companies were the main channels through which grains were marketed. Co-operatives were promoted as intermediaries in the marketing chain, distributing inputs, bulking produce and marketing to the parastatal marketing boards. The state owned storage infrastructure and facilities for assembling produce in very remote locations. Pan-territorial and pan-seasonal pricing policies were adopted, often with little or no regard for significant differences in the cost of assembling produce from different regions. Formal grades and standards were enforced at farmgate (by the co-operatives) and other levels in the state-controlled marketing system, in most cases with state-owned milling companies dominating the formal end-user segment of the chain.

The state-controlled marketing systems offered some level of certainty with regard to output marketing channels, producer prices (often announced prior to the harvest), and grain quality. However, by the beginning of the 1980s, it had become apparent in most countries that the fiscal burden of maintaining this marketing model could not be sustained. Furthermore, producer prices tended to decline in real terms as governments were often reluctant to adjust prices, especially when it meant requiring the more vocal urban consumers to pay more. Consequently, many African and other developing countries carried out major reforms in grain output markets. Marketing boards were either abolished or their role was scaled back substantially. In many cases, this process also involved the abolition of grading standards as informal, private traders emerged as dominant players in the grain trade. State involvement in setting grain prices was largely abandoned, and public financing of grain trading was substantially scaled back.

More than two decades after these reforms, the overall outcome remains rather mixed. Scaling back the role of the state in grain marketing lowered the fiscal burden. Huge losses incurred by the parastatal marketing boards as well as their considerable financing requirements for grain procurement was reduced. In addition, pressure to subsidise grain prices was eased. The increased space for private sector involvement in grain trading opened up livelihood opportunities for micro and small-scale traders – with pro-poor benefits, especially in countries such as Ghana where women play a preeminent role in assembling produce at the farmgate. The emergence of a more competitive marketing system also led to lower marketing margins, often benefitting urban consumers.

Despite these gains, inefficiencies in the grain output marketing systems persisted or were even accentuated. For instance, the involvement of large numbers of micro and small-scale traders as assemblers and retailers has made supply chains longer, squeezing producer margins. Farmers’ organisations such as co-operatives have been marginalised in their role as assemblers. Furthermore, poor rural road infrastructure contributes to the high cost of assembling grain in the surplus-producing communities – the parastatal marketing boards used to absorb these costs and sometimes invested in rural roads and appropriate transport facilities. Access to markets became more uncertain for many smallholder farmers after liberalisation. This is partly because most of the assemblers are severely under-capitalised and unable to absorb large volumes of surplus at the peak of the harvest. Furthermore, limited access to finance for consumption smoothing often compels farm households to sell the bulk of their grain during the harvest season. Consequently, farmgate prices for grains tend to be depressed during the harvest and often pick up a couple of months later.

The abolition of state-guaranteed pan-territorial/pan-seasonal pricing exposed smallholder farmers to high price risks with little or no mitigation mechanisms. Their bargaining position tends to be weakened by a lack of market information and also by their limited ability to meet household consumption needs without selling their produce – even if prices are extremely low. Already facing the challenge of yield uncertainty given Africa’s predominantly rainfed agriculture, their increased vulnerability to price risk has only made them even less attractive to formal lenders as borrowers. This does not, however, have to remain gloomy. The new challenges which have stymied the emergence of efficient and rewarding grain marketing systems in Africa can be overcome if innovative market-supporting institutions such as warehouse receipt systems are developed.