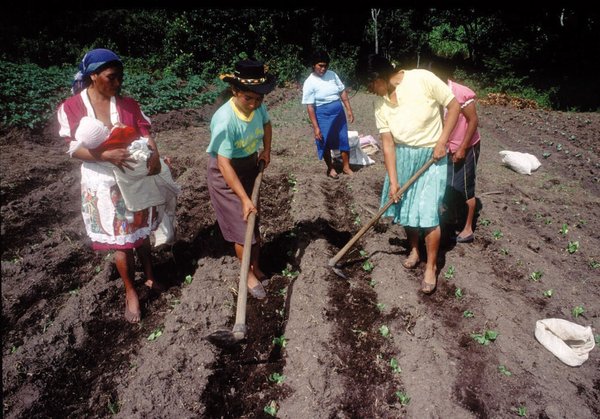 The livelihoods of many rural dwellers are dependent on having secure and equitable access to land. Tenure security is also a prerequisite for sustainable land management. The massive interest of commercial investors has increased the pressure on land globally. This article describes the international community’s efforts to improve the responsible governance and management of land.

Following the global food crisis of 2008, land is firmly back on the international political agenda. It is a key issue in the debates on food security, agriculture and rural development. What is more, it is also a hot topic among investors who regard farmland as an important new source of revenue.

Demand for arable land is increasing

According to the latest figures on the dynamics of the land rush published by the Land Matrix (www.landmatrix.org) in 2013, more than 775 investment deals have been concluded since the year 2000, covering 32.6 million hectares in low and middle income countries. Another 10.8 million hectares are currently under negotiation.

At the same time, 75 per cent of the world’s malnourished population live as subsistence farmers, pastoralists or landless agricultural workers in rural areas – often with limited or no access to land, or with their land rights threatened by evictions, expropriations or sales and leases of the land to investors. For these people, secure and equitable access to land is a key to the realisation of their right to food and other human rights.

Other farmers – often including smallholders – would like to expand their activities and invest in their own farms. A study commissioned by the UN Committee on World Food Security has recently revealed that limited access to land and other natural resources is one of the three most binding constraints on smallholder farming investment, especially for women. Highly skewed distribution of access to land and water critically hinders the productive potential of smallholder farmers.

How people and communities gain access to land is defined and regulated by societies through systems of tenure. The tenure systems determine who can use which resources, for how long, and under what conditions. The systems may be based on written policies and laws or on unwritten customs and practices. There are numerous countries with plural land rights systems, where customary and/or communal forms of land tenure coexist with formal legal systems.

The opportunity to acquire and use tenure rights depends not only on the tenure system itself but also on how the system is governed. The governance of tenure is a crucial element in determining if and how people, communities and others are able to acquire the rights (and associated duties) to use and control the land. Many tenure problems arise because of weak governance characterised by corruption or the discrimination of certain marginalised groups, or simply by the insufficient technical and human resources of the land administration authorities.

In light of the increasing acquisitions of arable land for large-scale agricultural investments, one particularly burning aspect of tenure governance is the recognition and protection of existing legitimate tenure rights, as well as participatory land use planning. Tenure systems and their governance are highly political issues because they are linked to the power relations within societies.

The Voluntary Guidelines on Responsible Governance of Tenure of Land, Fisheries and Forests

With the growing international attention on land issues, an interest has emerged for international guidance on how the tenure of land should be governed responsibly.
In 2009, the UN Food and Agriculture Organization (FAO) started a participatory and inclusive process which led to the endorsement of the Voluntary Guidelines on Responsible Governance of Tenure of Land, Fisheries and Forests in the Context of National Food Security (VGGT) in Rome, Italy, in May 2012 by the member states of the Committee on World Food Security of the United Nations (CFS). The VGGT are the first globally endorsed instrument of soft law that deals with the politically sensitive issue of access to land and other natural resources with strong reference to the state’s obligations under international law, especially international human rights instruments.

The VGGT promote secure tenure rights and equitable access to land, fisheries and forests as a means of eradicating hunger and poverty, supporting sustainable development and enhancing the environment, with a special emphasis on marginalised and vulnerable groups. They are intended to provide states with guiding standards and principles for shaping their strategies, policies, legislation and administration in terms of the tenure of land, fisheries and forests. But they also address other actors such as the private sector and civil society by laying down guidelines on issues such as the conducting of investments or the controlling of government actions. The VGGT include

In addition, the VGGT formulate minimum standards for investments which require transactions in tenure rights. Key elements include the conduct of prior impact assessments on tenure rights and the right to food of the population concerned, transparency, appropriate consultations and – in the case of indigenous communities – the obtaining of their free, prior and informed consent.

References to sustainable land use and protection of the environment. While the VGGT primarily focus on secure land rights in the context of food security, they also talk about the sustainable use of land and environmental protection, since these issues are intertwined and dependent on each other. In the chapter on investments, the environment is explicitly mentioned among the values which need to be protected against the potential risks arising from large-scale investments. Furthermore, impact assessments prior to investment projects and redistributive reforms should also cover the possible negative environmental impacts of the investments or reforms. Other references to environmental safeguards on the prevention of land degradation are contained in the chapter on consolidation and readjustment approaches as well as in the chapter on spatial planning. In the latter, it is explicitly pointed out that spatial planning should take duly into account the need to promote diversified sustainable management of land, fisheries and forests, including agro-ecological approaches and sustainable intensification, and to meet the challenges of climate change and food security (guideline 20.5).

The VGGT are not legally binding, and their implementation is entirely voluntary. Nevertheless, the guidelines possess a high degree of legitimacy due to the fact that the text was actively negotiated point by point over a period of several weeks by almost 100 countries, more than 25 civil society organisations, the private sector and various international organisations, before finally being unanimously adopted by the CFS.

The German Federal Government considers the adoption of the VGGT to be a milestone towards good governance in the land sector. Having championed the drafting of the guidelines, the Federal Government is now actively involved in their implementation in different ways. One example of its commitment is the organisation of the international conference “Policies against hunger: Land ahead!”, which was hosted by the Federal Ministry of Food, Agriculture and Consumer Protection in June 2013. At the conference, policymakers shared experiences with representatives of farmers’ associations, the private sector, civil society and international organisations, exchanging ideas for the improved governance of land in the spirit of the VGGT. One of the key conclusions of the participants was the call for inclusive, participatory, multi-stakeholder dialogues at country level because the implementation of the VGGT is not a purely technical process – it is, in essence, a social and political question (see also www.rural21.com ➤ News).

The success story of Rome greatly contributed to the fact that land was put on this year’s G8 agenda. In their Lough Erne 2013 Communiqué, the G8 pledged to support greater transparency in land transactions and to increase capacity for building good land governance systems in developing countries. To support the implementation of the VGGT and regional processes such as the African Union’s Land Policy Initiative, the G8 countries established partnerships with a number of developing countries and relevant international organisations in order to accelerate and target the support of existing national land governance programmes in conjunction with farmers, the business sector and civil society. Initial partnerships have been launched with Burkina Faso (US), South Sudan (EU), Namibia (Germany), Nigeria (UK), Niger (EU), Senegal (France) and Tanzania (UK).

FAO’s activities for VGGT implementation. The G8 also acknowledged the role of the FAO in providing global policy guidance for good land governance and transparency. Building on the adoption of the VGGT, the FAO has set up a support programme which contains the following elements: awareness raising, tools for capacity development, support to countries, strengthening of partnerships (e.g. with the World Bank, IFAD and the African Land Policy Initiative), as well as monitoring and evaluation.

In response to the major increase of world-wide agricultural investment activities and the associated opportunities and risks, the CFS decided in 2012 to develop a set of voluntary principles designed to guide responsible investments in agriculture. Such investments are essential for enhancing food security and nutrition, reducing poverty and promoting agricultural development. The principles are intended to clearly spell out the obligations and responsibilities of states and the private sector with regard to the human rights of local populations and the sustainable use of natural resources.

The new CFS process takes into account the Principles for Responsible Agricultural Investments that Respect Rights, Livelihoods and Resources, presented by the World Bank, the FAO, the International Fund for Agricultural Development (IFAD) and the United Nations Conference on Trade and Development (UNCTAD) in 2010. Since these principles were highly contested by several governments and civil society due to a perceived lack of inclusiveness in the drafting process as well as lack of references to human rights, the decision was taken to draw up a new catalogue.

The zero draft of the principles is expected to be presented in summer 2013. It will serve as the basis for the subsequent consultation process with all the affected stakeholders. The text of the principles is set to be negotiated in spring 2014. Endorsement by the CFS is scheduled for October 2014.

The recent momentum in the development of international soft law instruments on land issues can be seen as a success. Whether or not these guidelines and principles are brought to life on the ground depends on the political will of governments and the ability of civil society to hold governments accountable and to demand the protection of their human and tenure rights.

Elisa Manukjan headed the German delegation at the negotiations of the VGGT in Rome. The article expresses her personal views and does not represent the official position of the German Federal Ministry of Food, Agriculture and Consumer Protection.