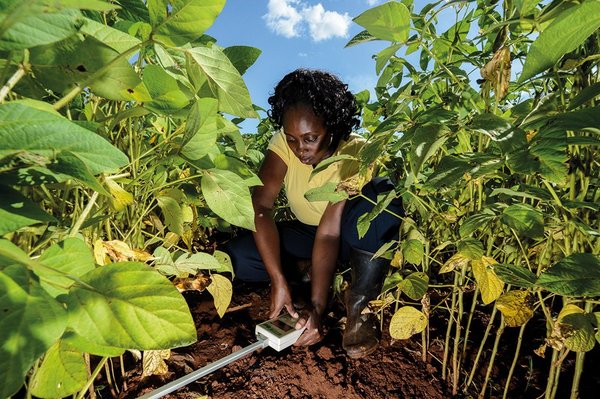 Today, finding climate-smart solutions for agriculture is right at the top of the CGIAR research agenda.
Photo: Georgina Smith/ CIAT

Moving towards “One CGIAR”

When the Consultative Group on International Agricultural Research was founded in 1971, its most urgent task was to raise agricultural production to feed the world’s rapidly growing population. While this task has not lost its urgency since then, global challenges today are significantly more complex. This has also had an impact on the organisational structure and the research agenda of the Group. Here, our author gives an account of how CGIAR developed and the process of reform which it has been undergoing since the beginning of the millennium.

CGIAR, the largest international agricultural research network, was once seen as the heart of the global food system. It still remains important particularly for the poorest people in the world, although its relative significance has declined. Other research systems have grown, and support for the CGIAR has stagnated, while the challenges it is expected to address of environmentally sustainable, healthy food systems have multiplied and become more complex.

Originally, the Consultative Group on International Agricultural Research, now simply known as CGIAR, was established in 1971, around the time of the first world food crisis. It was based on the work of two iconic international centres, the International Rice Research Institute (IRRI) and the International Maize and Wheat Improvement Center (CIMMYT), established respectively in 1960 and 1963 to develop high-yielding, disease-resistant varieties, and both supported by the Rockefeller and Ford Foundations. Their work dramatically increased production of staple cereals, and turned countries like India, perpetually facing food shortage in the 1960s, into a net exporter of cereals by the late 1970s. But these investments were not enough to feed the world's rapidly growing population.

So, in 1970, the Rockefeller Foundation proposed a worldwide network of agricultural research centres under a permanent secretariat. Supported and developed by the World Bank, the UN Food and Agriculture Organization (FAO) and the United Nations Development Programme (UNDP), CGIAR was established to coordinate international agricultural research efforts aimed at reducing poverty and achieving food security in developing countries. Implicit in the CGIAR model, rarely well-articulated but practised with conviction in Asia by the likes of Norman Borlaug and Sir John Crawford, was that CGIAR would produce international and regional public goods, with large spill-overs and calling for considerable state-of-the-art scientific expertise and resources, whereas developing countries would invest to strengthen their own research systems to “borrow” new knowledge from CGIAR. As shown below, regrettably, that model has been practised by only a few developing countries.

The System grew from the original four centres, besides CIMMYT and IRRI the International Center for Tropical Agriculture (CIAT) and the International Institute of Tropical Agriculture (IITA), to include many other centres. The research scope also expanded – from rice, wheat and maize to cover cassava, chickpea, sorghum, potato, millet and other food crops, and encompassed livestock, farming systems, the conservation of genetic resources, plant nutrition, water management, policy research, and services to national agricultural research centres in developing countries. By 1983, 13 research centres were operating under its umbrella around the world, and by the 1990s, the number of CGIAR centres had grown to 18. Mergers between the two livestock centres (the International Laboratory for Research on Animal Diseases (ILRAD) and the International Livestock Centre for Africa (ILCA)) and the absorption of work on bananas and plantains into the programme of the International Plant Genetic Resources Institute (IPGRI; later called Bioversity International) reduced the number of centres to 16. Later, another centre, the International Service for National Agricultural Research (ISNAR), was absorbed into the policy research, reducing the total number of supported centres to 15.

This consolidation was not enough to address system-level problems, which consisted of a large number of centres, the increasingly complex research agenda, often short-term funding to carry out long-term research, funding tied to numerous small individual research projects, and the growing demand from donors to “show impacts on the ground”, despite little or slow growth in funding. At the same time, in large emerging countries like China, India, and Brazil, major research systems had evolved with formidable cadres of agricultural scientists, while small, low-income countries faced weak national systems with diseconomies of scale.

In response to the changes in the external environment, CGIAR has been in an almost perpetual state of reforms from the start of the new millennium. From 2001 to 2007, it took initial steps to formalise governance and management, adopting a movement towards a centralised model as well as large system-wide challenge programmes.

From 2008 to June 2015, it adopted transformational changes in governance and management. The CGIAR Consortium of International Agricultural Research Centers was established in April 2010 to coordinate and support the work of the 15 international agricultural research centres. The CGIAR Strategy and Results Framework (SRF) was established to guide the work of CGIAR-supported centres. The work of the CGIAR Consortium was governed by the Consortium Board, a ten-member panel that has fiduciary responsibility for CGIAR Research Programs, including monitoring and evaluation and reporting progress to donors. CGIAR Research Programs are approved and funded by the CGIAR Fund on a contractual basis through performance agreements.

Avoiding fragmentation and duplication of effort

In 2008, CGIAR embarked on a change process to improve engagement between all stakeholders in international agricultural research for development – donors, researchers and beneficiaries – and to refocus the efforts of the centres on major global development challenges. A key objective was to integrate the work of the centres and their partners, avoiding fragmentation and duplication of effort.

Thus the CGIAR components included the CGIAR Consortium of International Agricultural Research Centers, the CGIAR Fund, the CGIAR Independent Science and Partnership Council (ISPC) and partners. Research is guided by the CGIAR Strategy and Results Framework. The CGIAR Consortium unites the centres supported by CGIAR; it coordinates limited research activities of about 15 research projects among the centres and provides donors with a single contact point to them. The CGIAR Fund aims to harmonise the efforts of donors to contribute to agricultural research for development, increase available funding and promote financial stability. The CGIAR ISPC, appointed by the CGIAR Fund Council, provides expert advice to the funders of CGIAR, particularly in ensuring that CGIAR's research programs are aligned with the Strategy and Results Framework. It provides a bridge between the funders and the CGIAR Consortium. The hope was that the Strategy and Results Framework would give the strategic direction for the centres and CGIAR Research Programs, ensuring that they focus on delivering measurable results which contribute to achieving CGIAR objectives. However, the research programmes were designed prior to the Framework being ready, so now some retrofitting had to take place to get the programmes in line with it. A biennial Global Conference on Agricultural Research for Development (GCARD) provides a forum for closer engagement of developing countries and partners in developing and guiding the research and development agenda of the CGIAR Consortium and the CGIAR Fund. The first GCARD was held in Montpellier, France, in March 2010.

From June 2015 to July 2016, and from then on to the present, further changes to governance and management have been in progress, including the 2019 (November-December) One CGIAR concept – a unified governance and management approach incorporating a reconstituted System Management Board and a new Executive Management Team. These various organisational changes have been intended to develop an integrated System-level research programme across the System’s 15 independent research centres, challenged by centre autonomy and donor sovereignty, with different research mandates, and accountable to its 15 independents boards with multiple, fragmented sources of funding for research programmes. At the time of writing this paper three of the 15 centres were in two minds about whether to join the reformed One CGIAR. Second, CGIAR has sought to promote research innovations that transform food, land, and water systems, in the context of climate change, to ensure a scientifically sound programme under circumstances in which the role of an independent scientific advisor has inadvertently become secondary to donors’ desire for choice of projects which would promise short-term impacts.

Third, by linking research to the realisation of SDG 2 (zero hunger), CGIAR has been working to reduce hunger and foster diet diversification by addressing issues of micronutrient deficiencies. The increasingly complex research agenda has had to be undertaken under conditions of uncertain financial resources tied to numerous small projects. Finally, CGIAR has faced the challenge of reducing the consumers’ growing reliance on basic staple crops and livestock (wheat, rice, maize, beans and root crops) for food security, since, historically, CGIAR’s main research thrust has been that of meeting the calorie gap. This has implied incorporating biodiversity into the farming systems to increase resilience to climate change and resource pressures and promote dietary diversity, as opposed to the previous practice of monocropping of high yielding varieties.

Responding to funding and management challenges

The 2018 CGIAR Annual Performance Report noted that 105 policies, legal instruments and investments were modified in their design or implementation, informed by CGIAR research which involved 1,003 partnerships (CGIAR 2018b, 10).

The 9th Systems Council (November 2019) approved yet another institutional innovation of a unified and integrated “One CGIAR”, to adapt to the rapidly changing global conditions, while also making the CGIAR system more relevant and effective. The fragmented nature of CGIAR’s governance and institutions had limited the System’s ability to both respond to increasingly interconnected challenges and to consistently deliver best practice and effectively scaled, research solutions needed to maximise impact. The expectation is that by integrating and improving, CGIAR can further leverage its role as the leading research and technology partner in agricultural research for development. The process of moving to “One CGIAR” was agreed to at the Extraordinary General Assembly of the Centers (Rome, December 2019). It includes a unified governance and management through a reconstituted System Management Board and a new Executive Management Team. An established unifying mission of “Ending hunger by 2030 – through science to transform food, land, and water systems in a climate crisis,” is focused on five impact areas: nutrition, poverty, gender, climate, and environment in support of the SDGs (CGIAR 2019e, 2020).

The new management structure of the “One CGIAR” is now in place, with three qualified managing directors. Additionally, the new structure is formed of three divisions, sub-divided into ten global groups and six Regional Groups, with the Global and Regional Directors reporting directly to the One CGIAR Executive Management Team, who in turn are accountable for institutional performance to the System Board.

The results of this latest ambitious restructuring will take time to materialise. Meanwhile, CGIAR rests on its laurels of well-demonstrated widespread impacts of its past research, mostly in the areas of germplasm improvement, and some policy research.

Uma Lele is a Visiting Scholar at the Institute of Economic Growth, Delhi, India, and President Elect of the International Association of Agricultural Economics. This article draws on the research conducted for the book "Food for All, International Organizations and the Transformation of Agriculture", written by Uma Lele, Manmohan Agarwal, Brian Baldwin and Sambuddha Goswami (Oxford University Press, 2021).
Contact: umalele1@gmail.com