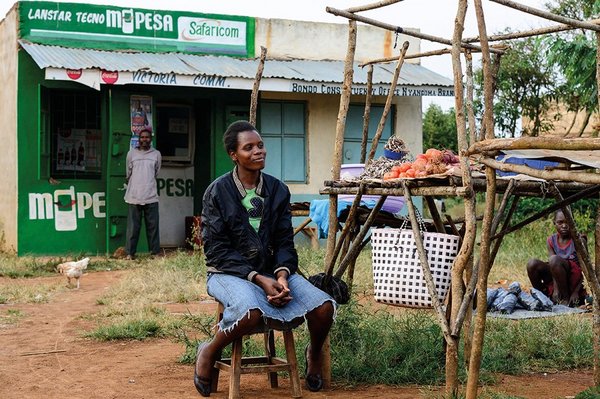 Mobile money is widely disseminated among farmers in Kenya, with M-Pesa being the most used service. Usually, however, agricultural activities continue to be handled with cash.
Photo: Jörg Böthling

Mobile-based solutions lagging behind their possibilities

Financial services that can be accessed and managed through a mobile phone hold promise for expanding financial inclusion among smallholder farmers. Recent research from Kenya shows that the overall uptake of services such as mobile money and mobile banking by farmers is considerable. However, most farmers are not yet integrating these services into their agricultural activities. In the following article, our author explains what this could be due to.

Resilient and efficient agricultural production requires access to decent financial services. Especially for smallholder farmers in developing countries, however, the choice of affordable, trustworthy, and accessible financial services has been fairly limited in the past. Rapid advances in the technology and telecommunications sector over the last two decades have now produced several innovative digital financial products that could help bridge this gap. In particular, digital financial instruments that are primarily accessible via mobile phones, so-called mobile financial services (MFS), are potential game changers for agricultural finance. Providers can design MFS so that even people with little integration into the formal financial sector and in areas with weak infrastructure can use such services. Operation and handling of MFS can be made relatively simple so that MFS do not require much training or prior knowledge of financial instruments. Therefore, especially in rural regions where infrastructure and education levels are comparatively low, MFS should be more suitable to the needs and resources of smallholder farmers than financial services from other providers such as formal banks. In an ongoing study, I analysed if and how farmers generally use different MFS and whether they use MFS within their agricultural operations. The study represents joint work with two colleagues from the University of Göttingen, in Germany, and uses a nationally representative survey of Kenyan farmers from 2018. The MFS that we consider in our study – which contains data from 3,041 interviewees – include mobile money and mobile banking. We assess if farmers use these services for payments, savings and credit. Kenya is a world leader in digital innovations around financial services. Yet, we are confident that the results are also of interest for the development prospects of MFS in many other developing countries where similar services are available as well.

We found that mobile money is widely disseminated among farmers in Kenya with more than 75 per cent of the respondents having used it within the time span of one year. Even farmers who work in traditional supply chains – i.e. farmers who mainly sell their produce on the nearest market or to neighbours/friends/family members – and mainly grow food crops have considerable rates of use. While there is still room for progress and not all farmers use mobile money (yet), the service appears to be quite inclusive and in line with the needs and resources of most farmers.

However, the general use of mobile money often does not translate into the integration of the technology as a means of payment for agricultural activities. Instead, cash is still by far the most common means of payment; only for less than two per cent of the farmers does mobile money represent the most important channel in this regard. Over the course of a year, 15 per cent of farmers made or received an agricultural payment via mobile money; among farmers who work in modern supply chains, i.e. those who directly sell to companies, manufacturers, factories, or exporters, this share was at 25 per cent, while among farmers in traditional supply chains, it was only eight per cent. There is still a substantial discrepancy between general use of mobile money and use of mobile money for agricultural payments. In our opinion, the reason for this is the business situation in which farmers typically interact with sellers and buyers. When inputs and outputs are bought and sold in comparably small quantities, buyer and seller often meet in person. This is typically the case for smallholder farmers offering their products on local markets or selling them to friends and neighbours. The incentives to use mobile money over cash are low in these circumstances, especially since every transaction above 0.75 euros entails a transaction fee.

When inputs and outputs are bought and sold in bulk quantities, as would often be the case for farmers who sell cash crops to cooperatives, exporters, companies, or factories, two other factors limit the usefulness of mobile money payments: first, mobile money services have single and daily transaction limits. With Kenya’s most popular mobile money service, M-Pesa (see Box), these limits doubled in March 2020 and now stay at approximately 1,150 euros for a single transaction and 2,300 euros for all transactions over one day. Second, mobile money transaction may be susceptible to fraud. For example, a buyer of farm produce may reverse a genuine transaction shortly after having received the produce. While only few farmers in our study who use mobile money to make agricultural payments mention fraud as an issue, we do find that bank transfers, which are less prone to fraud and do not have transaction limits, are used by nearly half of all farmers who sell to companies, exporters, cooperatives or factories. For these farmers, bank transfers even seem to be replacing cash as a primary means of payment.

MOBILE FINANCIAL SERVICES IN KENYA
The mobile money service M-Pesa of Kenya’s mobile telephone company Safaricom is the best known and by far most used mobile money service in Kenya. The two market dominating mobile banking services M-Shwari and KCB M-Pesa are collaborations between Safaricom and the Commercial Bank of Africa and Safaricom and KCB Bank Kenya respectively. M-Pesa is therefore closely connected to both mobile banking services. After six months of subscription, an M-Pesa user is automatically eligible to open an M-Shwari and KCB M-Pesa account. Transfers from a user’s M-Pesa account to his or her mobile banking accounts and vice versa are free of charge. Opposed to M-Pesa, mobile banking accounts offer savings accounts with interest, lock savings accounts, as well as small loans. Credit scores and loan eligibility are determined through a set of mobile phone and mobile money usage indicators.

We argue that mobile money can be useful for medium size payments when business partners are located in different places or are very mobile. Overall, however, mobile money is currently more of a niche tool for agricultural payments. As with the integration of farmers into modern value chains, they seem more likely to shift from cash to bank transfers rather than from cash to mobile money, we do not expect mobile money to see much use outside this niche in the near future.

Digital savings are a viable option for agri-finance

While mobile money transfers are an important function of mobile money services, we find that the ability to hold and save money in one's mobile bank account is arguably more important for farming activities. More than 44 per cent of Kenyan farmers generally use mobile money as a tool for saving and about nine per cent of farmers reported that mobile money savings were their main source of financing farming activities. Saving money on a mobile money account usually neither requires a minimum balance nor does it entail any maintenance fees. However, mobile money savings do not yield any interest, and M-Pesa, for example, has a maximum account balance of 2,300 euros . Although most farmers still use other main sources of finance for their agricultural activities, such as family gifts, sale of livestock or income from salaries, the accessibility and low costs of saving in a mobile money account seem to make it a viable option for agri-finance for some farmers. Nevertheless, when farmers have access to a bank account, mobile money savings lose some of their relevance. As a result, we observe higher rates of mobile money use for savings among farmers in traditional supply chains, as these are more likely not to have access to other formal savings than farmers in modern supply chains. Interestingly, only one per cent of Kenya’s farmers use savings through mobile banking as a main tool to finance farming. Farmers are therefore much more likely to use mobile money savings for farming than mobile banking savings. This is surprising as saving through a mobile banking account has several advantages over saving through the mobile money provider, most notably even higher interest rates than those offered by most formal banks and no maximum account balances.

We find that farmers have significantly more trust in mobile money providers than in mobile banking providers. However, for most farmers, the provider of both services is the same company (see Box). We therefore suspect that the difference in trust most likely results from farmers' longer experience with mobile money, which was introduced in 2007, compared to mobile banking, which was introduced in 2012. As experience with mobile banking and its services will increase over time, we expect this difference in trust to diminish. Mobile banking savings should then become increasingly relevant for agri-finance.

Unlike mobile money services, customers of mobile banking services can apply for credit. Credit approval is determined by algorithms relying on various indicators of mobile phone and money usage and does not require collateral. Digital credit could therefore be particularly valuable for farmers living in rural areas where banks are far away, farmers who may not be able to obtain credit from banks due to a lack of credit history, or farmers who are reluctant to put up any collateral.

We find that approximately eight per cent of all farmers in Kenya have indeed taken at least one digital loan over one year. Yet a minimal proportion of less than one per cent of all farmers has taken out a digital loan to finance an agricultural activity. Farmers’ general reluctance to use credit for agri-finance in sub-Saharan Africa is well-known, yet this negligible rate of digital credit use is surprising. It seems that the current form of mobile loans is either not expedient for farmers, or that the usefulness of mobile loans has not yet translated into actual adoption by farmers. We assume it is a combination of both. Arguably the biggest drawback of mobile loans that were available during the time period of the survey were the high interest rates of 7.5 per cent per month, as well as the short repayment period of one month. A key purpose of agricultural credit is to bridge the time between investment and cash inflow. In most crop production systems, the timespan between planting and harvest is much longer than one month, which makes credits with short repayment periods unattractive for such purposes.

Whether farmers start using digital credit on a larger scale will depend mainly on the ability and efforts of MFS providers to tailor digital credit products to agricultural investments. Recently, new credit schemes with repayment periods of 30 to 90 days have been developed by Safaricom in Kenya, which were supposed to fit better to the needs of farmers. Yet the merit of such credit schemes remains questionable. The digital credit market in Kenya is generally characterised by high default rates, and it remains to be seen whether and how farmers can benefit from mobile credit. It is important to emphasise that consumer protection must not be sacrificed to prevent farmers from over-borrowing and blacklisting. Otherwise, digital credit could be a barrier to financial inclusion for farmers, which is exactly the opposite of the original hope placed in MFS.

Martin C. Parlasca is an agricultural economist. He holds a PhD in economics from the University of Göttingen, Germany and currently works there as a postdoctoral researcher at the chair of International Food Economics and Rural Development.
Contact: martin.parlasca@uni-goettingen.de