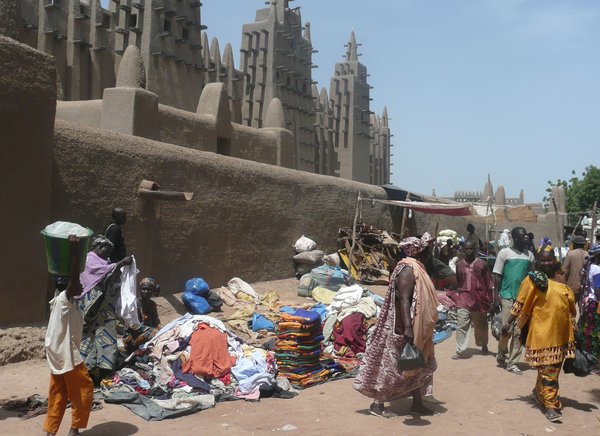 A visit to the West African Sahel country of Mali is like a journey into the past. Today, the clay architecture and cultures in Djenne, Mopti and Timbuktu still reflect most impressive artisanship as well as the prosperity of past kingdoms. In order to also benefit tourism with these treasures, Mali has invested heavily in the tourist sector. But owing to travel warnings issued by European countries and renewed attacks by Al Qaida au Maghreb, tourist numbers are in steady decline, especially in the North. The attacks launched by the Tuareg in January 2012 are putting a further severe strain on the tourism sector in the North of Mali.

From the 15th to the 17th century, the ancient Kingdom of Mali was regarded as “El Dorado”, the country of gold, by the Europeans and Arabs. In legendary Timbuktu, on the edge of the Sahara, the roads are said to have been paved with gold. Only little has remained of this splendour. Today, Mali is among the poorest countries in the world. In the United Nations Human Development Index 2010, Mali was 160th out of 169 countries But a journey there, to the ancient royal cities of Timbuktu, Segou, Djenne and Mopti, offers an encounter with unique clay architecture and the traditions of the country’s numerous tribes, who have been living together peacefully since the country’s independence 50 years ago.

Gold continues to be an important source of income for Mali, which is Africa’s third largest gold producer. However, the most important economic sector is agriculture, providing around 80 percent of the Gross Domestic Product. The most important export product from agriculture is cotton, which is grown in the country’s fertile Southeast, on the border with Burkina Faso. The third most important economic branch is tourism, into which the country has invested around 630 billion franc cfa (1000 Franc Cfca = 1,50 euro) over the last few years. This includes developing the hotel and catering trade, also in rural regions, and improving infrastructure, such as roads and public transport throughout the country. The plans of the Mali government and the neighbouring countries of Mauretania, Burkina Faso and Niger to offer common visas are a further step towards expanding tourism.

Ségou – the capital of the Bambarra Kingdom in the 16th–18th century
Not far off from the capital of Bamako, there is Ségou. At first glance, this ancient royal and colonial garrison city on the banks of the sluggish Niger seems to have only little to offer. But spending a little time there is worthwhile. The Bambarra Kingdom of Ségou reached its zenith under Mansa (King) Monzon at the end of the 18th century. The royal palace in close-by Sékoro has been restored with international support and bears testimony to the power that this Bambarra Kingdom wielded. It was only defeated by Moslem El-Hadj Omar Saidu in the second half of the nineteenth century. In order to get to the Palace of Ségou, the King’s subjects had to pass through seven guarded halls that can once again be admired today. The administrative buildings and the villas of the French colonial masters certainly deserve a visit, too.

The Dogon Country - opportunities and risks through tourism
In the Dogon Country, 500 kilometres northeast of the capital of Bamako, one of Africa’s most important cultures can be found. It developed from the fourteenth century on. Accessing the Dogon Country is still difficult. The villages built into the cliffs of the Falaise de Bandiagara, an eighty-kilometre-long escarpment, can only be reached on foot, and the only way to traverse the area is along sandy tracks in a cross-country vehicle. Nevertheless, with its unique blend of nature and culture, the Dogon Country has developed into Mali’s most important tourist attraction.

Alongside agriculture, tourism represents an important source of income for the inhabitants of the Dogon Country. Experienced local guides are required who bring the travellers to the villages. Small inns are being created, as well as museums in the larger places. The mask dances will also be performed for tourists if they are booked in advance. Initial steps have been taken regarding ecotourism. In the capital of the Dogon Country, in Bandiagara, two new hotels have been established that also meet higher standards. Camps with catering for backpack tourists can be found nearly everywhere.

The Al Qaida au Maghreb Islamique groups, which are also thought to be operating in the North of Mali, represent a threat because of which numerous western countries, above all France, have declared the Dogon Country a red alert zone with the result that tourist numbers have strongly declined.

A threat to tourism – the Al-Qaida au Maghreb Islamique attacks
Since 2008, the terrorist group Al Qaida au Maghreb Islamique, has contributed to a considerable destabilisation of the Sahel countries Mali, Mauretania and Niger by committing numerous assassinations in the regions, the conflicts with the Touareg having just been settled. Mali’s northern provinces, and in particular the formerly so important Timbuktu, which can still boast so many legends, has been declared a red alert zone by European countries such as France, the United Kingdom and Germany. This dealt a severe blow to tourism. After an almost one-year break, AQGMI once again launched an attack in Timbuktu towards the end of November 2011, killing a German tourist and kidnapping three further tourists. After this assault, tourists are probably going to stay well clear of the region, and the newly opened hotels and restaurants, which have also been created with government support over the last ten years, will be waiting for guests in vain. It remains to be seen whether it will still be possible to hold the “Féstival du Désert” in 2012. For years, this unique annual festival has attracted visitors from all over the world who had the opportunity to listen to famous Mali music group under a desert sky for two days and two nights. According to statistics, more than 45,000 guests came to Timbuktu in 2006; in 2009, there were only 4,000, and in the first six months of 2011, a mere 429 guests came.

AQMI is thought to have around 200 members. Although their numbers have been heavily decimated by Algerian and Mali military attacks, they continue to maintain their retreats in the desert areas, also in the North of Mali. Studies by the Friedrich Ebert Foundation suggest that AQMI can draw on around 100 million US dollars, acquired by taking hostages but also with drug and arms smuggling, which is on the increase in the Sahara, a region that can hardly be put under surveillance (Annette Lohmann: Who Owns the Sahara?, Friedrich-Ebert-Stiftung, 2011).

A new threat through Tuareg revolts in northern Mali
The revolts of the Tuareg represent a new serious threat, above all to the North of Mali. As the Society for Threatened Peoples (STP) reported early in February 2012, the tourism sector in Timbuktu has been especially hard hit and is facing a final collapse. The Society for Threatened Peoples maintains that the Tuareg are pursuing two goals: to drive Al Qaida out of the region with their revolt, and to once again underline their right to self-determination vis-à-vis the Mali government.
As the STP also reports, the rebels are accusing the Government of Mali of not comprehensively implementing the Algiers Peace Treaty of 2009 and doing too little for the country’s North, which has been neglected for a long time. In addition, there appears to be a massive influx of mainly young Tuareg from Libya. Following the collapse of the Gaddafi regime, large numbers of Tuareg had to leave Libya. “These young Tuareg have no prospects and are returning to a region in which radical Islamists of AQMI (Al Qaida au Maghreb Islamique) are in charge,” the STP fears.

Consequences for the population
Mali placed great hopes in the tourism sector, since it had been reckoning with the creation of a large number of jobs in the tourism trade thanks to the country’s most important tourist sites, including not only Timbuktu, but also Djenne and the Dogon Country. These locations have been declared World Heritage Sites by UNESCO. But the hotels and restaurants are only poorly frequented, and the numerous tour operators and guides wait in vain for guests. Thus it has to be feared that investing in tourism, an important element of Mali’s policy to alleviate poverty, will come to nothing.

Just like everywhere else in the world, young people are especially hard-hit. Many of them have been trained as official tour guides or opened up small travel agencies. If they lose their jobs, a lot of them will probably head for the capital of Bamako, where they can add to the army of job-seekers. Or they may well fall prey to drugs and arms dealers from the Ivory Coast and other neighbouring countries, who are increasingly smuggling their goods through the country. The Friedrich Ebert Foundations regards growing organised crime through arms and drug dealing as a threat to the country’s stability. The Al-Qaida attacks appear to be pursuing the same goals, too.

Conclusions
For most of the developing countries, tourism has become an important business branch that the local rural population can benefit from in particular. For whether in Africa, Asia or Latin America, many of these countries have great natural and cultural assets that attract veritable droves of tourists from Europe or North America.

While Mali has no palm beaches by the sea, it can boast what are probably the most beautiful cultural monuments as well as the most unique clay architecture in West Africa. Over the past ten years, the country has been investing heavily in developing the tourism sector, together with numerous private enterprises that have established small tourism businesses throughout the country and opened hotels in the most attractive spots, such as Timbuktu, Mopti, Djenne and Biandiagara, some of which are very comfortable. Owing to Al Qaida au Maghreb islamique attacking tourists in Timbuktu towards the end of November 2011 and travel warnings for the entire North of Mali (which also includes the Dogon Country), these investments appear to have been futile.
Of course it is not only the tourism sector that has been hit by the AQMI activities but the stability of the entire region. Determined steps have to be taken to prevent any further destabilisation, e.g. via political and economic support for development in the northern provinces that are affected. Jobs have to be created that can, for instance, also replace the jobs lost in the tourism sector. Developing agriculture along the River Niger, as planned by the Mali government, would be an alternative. Mali’s European partners, France, Germany and the United Kingdom, ought to contribute to this, for Mali will not be in a position to master this challenge on its own. Military action against terrorist organisations or organised drugs and arms smuggling will not be enough.