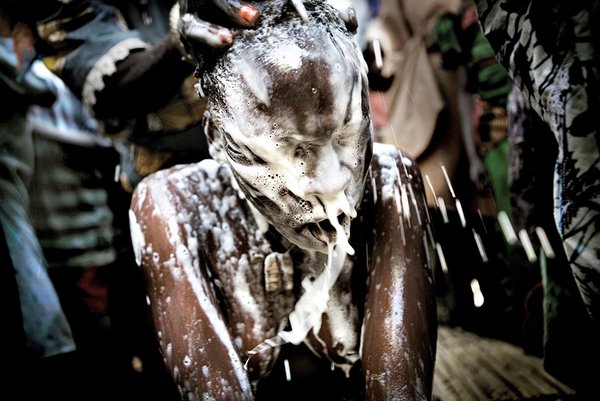 Ritual washing of a 14-year-old girl before she is handed over to her husband.
Photo: Mads Nissen/Laif

During the last few years, child marriage has mostly been handled as a human rights and social issue in the international debate. While this is no doubt justified, a strong economic case also exists for speeding up the efforts and enhancing resource allocations to end child marriage and promote gender equality. Our authors shed a light on the costs of early marriage for Africa’s development and present the encouraging example of Zambia.

Each year, twelve million girls marry before the age of 18 – almost one every two seconds. The highest incidence rates are in sub-Saharan Africa, where 38 per cent of girls get married before they are 18 years of age.

Much speaks in favour of ending child marriage. Not only is it a violation of human rights and a major impediment to gender equality; for the girls affected, child marriage means an overall lack of freedom and choices, it hampers sustainable growth, and moreover, it is costly. While some governments have addressed this issue legally and revisions to the legislative framework are also being undertaken, the efforts to tackle the root causes have been slow.

Unpacking child marriage leads us to three topics which are equally its cause and effect and must be addressed if we are to put an end to this practice:

i) Access to sexual and reproductive health and early and unwanted pregnancies. Girls married at an early age are hit by high mortality rates. Their children also tend to run the risk of dying at an early age, as high infant mortality among young mothers shows.

ii) Traditional norms and practices. Child marriage is driven by traditional practices and beliefs and the low social status assigned to women and girls. There are also inconsistencies with what is provided for under statutory law and customary law regarding child protection, with the customary legal system allowing girls to be married as soon as they have reached puberty. Available evidence indicates that for each year a girl is married before adulthood, her literacy reduces by 5.6 per cent. This low level of literacy will affect hygiene and health at household level and the future education of children growing up in such a home. Moreover, child brides face a higher risk of gender based violence than women in general.

iii) Low levels of education. The United Nations Educational, Scientific and Cultural Organization (Unesco) estimates that at least half of the youth in sub-Saharan Africa do not go to school. This leads to an enormous number of young people not being able to live up to their full potential and consequently not contributing to national economic growth. Child marriage takes girls out of school and is likely to produce a cycle of reducing education prospects for the next generation. As a result, in many cases, the child brides as well as their offspring remain in a vicious cycle of poverty and their potential contribution to national development is not utilised. That is why, when tackling the problem of child marriage, we should not only be talking to ministers of gender and family affairs as well as social welfare but should also include ministries of finance, education and planning in our discussions.

The demographic dividend and Africa’S efforts

As briefly described above, the problem is particularly prevalent in Africa, especially in rural areas. Fifteen out of 20 countries with the highest rates of child marriage are in sub-Saharan Africa. Therefore, in June 2014, in partnership with the United Nations Children’s Fund (UNICEF) and the United Nations Population Fund (UNFPA), the African Union (AU) launched the Campaign to End Child Marriage – in order to enhance continental awareness of the harmful impact of child marriage and by taking appropriate legal, social and economic measures. In June 2015, the AU formally adopted a common position on ending child marriage in Africa. Since then, the Member States of the African Union held the first Africa Girls’ Summit on Ending Child Marriage in Africa in Zambia in November 2015, and they are currently planning a Second Africa Girls’ Summit.

In the next 35 years, 1.8 billion babies will be born in Africa; the continent’s population will double in size; and its under-18 population will increase by two thirds to reach almost one billion.
UNICEF: “Generation 2030. Africa: Child demographics in Africa”

While we can witness political will and a huge momentum, progress is slow, and even though the number of girls being married is decreasing, the decline is not fast enough to match population growth on the continent. Furthermore, the median age of marriage has not changed significantly. In fact, in some countries, such as Burkina Faso and Niger, the actual number of girls being married is set to increase, as a 2017 UNICEF report shows. One of the main reasons for this is the rising number of people below the age of 18, especially in sub-Saharan Africa. For example, as of midyear 2016, Zambia had a population of 16.6 million, with an annual population growth rate of 3.0 per cent; 45.4 per cent of Zambia’s population were under age 15. Between 1990 and 2015, there was only a slow decline in the total fertility rate, and the average number of children per woman over the course of her lifetime declined from 6.5 children to 5.5 children. In order for Zambia to realise a demographic dividend, fertility must decline significantly. Combined with the right investments in health, including sexual and reproductive health services, education, and job creation, such a decline could open a window of opportunity for economic growth.

Child marriage and the SDGs Given its overall impact on economic development, eliminating child marriage and harmful traditional practices is also addressed in the Sustainable Development Goals, more specifically in target 5.3 to “eliminate all harmful practices, such as child, early and forced marriage and female genital mutilations” by 2030.

Owing to its direct link to fertility rates and thus population growth, child marriage is a key component to be addressed in the coming years and to harvest the fruits of a demographic dividend. The World Bank states that “the welfare benefits from lower population growth when ending child marriage are estimated globally (for 106 countries) at USD 22 billion in 2015 and USD 566 billion in 2030”.

One of the few countries that have developed strategies to end child marriage is Zambia. In addition to the legal and policy framework, the Zambian government has formed a consortium of line ministries working with civil society organisations (CSOs) network and co-operating partners. The work is guided by the National Strategy on Ending Child Marriage 2016–2021 and is to be performed via an Action Plan supported by a special budget. Measures include a survey on the Boys to Men project and boys and men’s role in ending child marriage as well as in mitigating the high prevalence of gender-based violence in Zambia.

Government in co-operation with partners, media, faith-based groups and traditional leaders is providing evidence of what works in communities. It is above all the involvement of traditional leaders that is bearing great impact. For example, in 2017, Chief Chamuka, together with a Task Force, developed, enacted and launched by-laws on ending child defilement, teenage pregnancies, child marriage and child labour in his chiefdom in Central Province. The Task Force was constituted in 2015, within his chiefdom. Parents with the intention of marrying off their daughters are requested to produce a birth certificate to the headman to ascertain whether the girl has reached a rightful age to get married.

Child marriage is associated with high levels of poverty, which continues to be a rural problem. Poverty leads many parents in sub-Saharan Africa to withdraw their daughters from school and offer them for marriage to older men (in most cases) in exchange for payment of 'lobola' (a dowry for the bride). This is a form of economic empowerment for rural communities. In contexts where bride wealth or bride price is practised (i.e. a groom or groom's family provides assets to the bride's family in exchange for marriage), families may reap immediate economic benefits from marrying their daughters. The younger the bride is, the greater the benefits may be.

To strengthen the fight, village headmen have the power to approve marriages on condition that all requirements are met. A family found forcing their daughter into marriage are fined 10,000 Kwachas (around 1,000 US dollars), and all revenues obtained through the marriage are forfeited to the chiefdom Child Protection Bank Account. The Chiefdom has a Child Protection Unit which is in charge of overseeing the funds. These funds are used to support vulnerable children with school fees and other school requirements.

Put money on the table!

For communication and resource mobilisation purposes, the international community likes to develop one-size-fits-all solutions. Nevertheless, it cannot be that easy, and to really understand and tackle underlying traditional and cultural practices, joint efforts should support community-born and youth-driven solutions that address the root causes of it. Furthermore, we need to focus our discussions on tools and instruments to monitor the implementation of the legal framework and budget in place to end child marriage, comprehensive sexuality education for in and out of school, and family planning.

Ending child marriage will not be an easy thing to do as it is a multi-facetted and complex issue which has to include a discourse about sexual reproductive health and rights, changes in mind-sets as well as behaviours and education and hence what the country is prepared to invest in those issues. It is not enough to leave the matter in the discussions of the women’s movement and machinery where in general, resources are very limited and ministries under budgeted for.

It is important to look not only at the words spoken but also at the budget lines allocated and tracked towards gender equality. Yes, political will is key – however, it will not be enough.

Dr Auxilia Ponga is Permanent Secretary at the Ministry of Gender and Development of the Republic of Zambia.
Monika Bihlmaier is Team Leader for East and Southern Africa at Plan International Germany.
Contact: Monika.Bihlmaier@plan.de