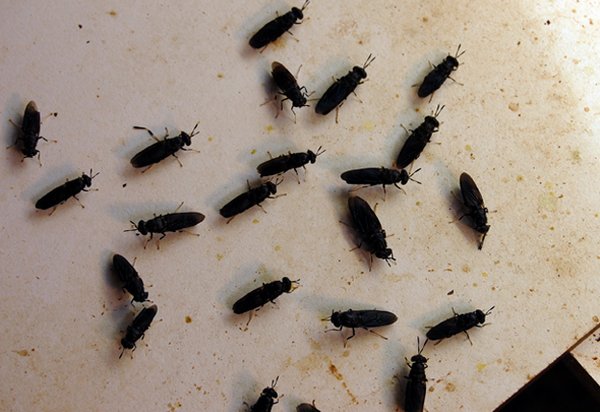 Insects – a protein source with a recycling potential

Like in other areas of livestock keeping, the growing demand for fish raises the question of how the feeding of animals can be maintained without competing with the provision of food for humans. The use of insect proteins could help save natural resources while simultaneously making use of organic waste.

Feeding livestock in farming results in an enormous world-wide demand for animal feed, which nowadays substantially exceeds a billion tons a year (Alltech, Global Feed Survey Results, 2014). The chief components are grain, soy, fishmeal and oilseeds, and all of them are either directly or indirectly in competition with human nutrition. At the same time, approx. 1.3 billion tons of food is wasted each year through harvest and processing losses, damage during transportation and simply being thrown away (FAO, 2011). The UN Food and Agriculture Organization (FAO) is reckoning with the world population growing to around nine billion people by 2050 and, as a result, an increase in food demand of 70 to 100 per cent compared to 2011. Given rising losses of tillable cropland, this food will have to be grown on the basis of the areas available today, if not on even less land. This will only be possible through a sustainable intensification of the use of natural resources, for example through a maximum recycling of existing organic resources.

This notion of recycling is now being taken up by an increasing number of scientists as well as the animal feed industry, who are developing research and development concepts for food waste recycling with the aid of insects and their larval stages. Research and industry are focusing in particular on five species and genera: the housefly (Musca domestica), the black soldier fly (Hermetia illucens), the mealworm (Tenebrio molitor), grasshoppers (Locusta migratoria, Schistocerca gregaria, Oxya spec., etc.) and the silkworm (Bombyx mori, etc.). The black soldier fly (BSF) is particularly interesting because it has some crucial advantages in comparison to other species, such as a short generation time and robustness towards diseases. Furthermore, the protein pattern of the larvae is very similar to that of fishmeal. The fly does not transmit any diseases, neither is it referred to as a “pest”. The larvae will eat virtually any type of organic substrate and are ideally suitable for the recycling of food waste. Drying, defatting and grinding of the larvae yields raw material for feed with a protein content of approx. 60 per cent and a raw fat content of 11 per cent (Maurer et al., 2015; Buser, 2014).

Research: from a holistic approach ...

Especially in tropical and subtropical areas, the development of insect proteins on the basis of organic residues (market and household waste, by-products of food processing, etc.) is meeting with increasing interest since it also provides cheap access to animal feed for smallholders and subsistence peasants. In December 2013, Switzerland’s Research Institute of Organic Agriculture (FiBL), in close collaboration with the University of Ghana, the Biotechnology and Nuclear Agriculture Research Institute (BNARI) and other Ghanaian partners, launched a research and development project combining waste management, compost research, animal feed development and aquaculture. In addition to the supply of animal feed, the IBFFP (Insect-based Feed and Fertilizer Production via waste transformation for smallholders in Ghana) project aims to provide solutions for the areas of settlement waste, community hygiene and improvements in soil fertility. A stable breeding colony has since been established, and there are initial insights into how the composting processes can be designed with the aid of the insect larvae. Concrete results regarding composting time, maturing of compost and the formulation and performance of the fish feed from the larvae are reckoned with in the course of the year. Supporting socio-economic surveys are to establish what acceptance among the population is like and how effective these strategies are regarding improvements in income and poverty reduction.

... to a practical feeding test. The suitability of insect flours in poultry and fish feeding was recently tested at the FiBL in various studies focusing on the example of hermetia flour (Maurer et al., 2015; Stamer et al., 2014; Buser, 2014). During a three-week trial feeding of laying hens, the soy component of the feed was replaced 50 to 100 per cent by Hermetia flour. In comparison to the control feed, no significant differences in feed intake and laying performance of the animals were recorded. In all groups, the animals’ health and plumage remained stable during the trial period and did not differ from one another. Also, in repeated studies of trout, it was demonstrated that fishmeal can be replaced approx. 50 per cent by Hermetia flour, without any significant drop in performance regarding growth over an up to seven-week trial period. In this context, an interesting insight was gained regarding the quality of insect flour. Mechanical partial defatting of the insect protein can result in better processing in the manufacture of concentrated feed and to a better digestibility in the fish. When the fish were later on tasted by an untrained test panel, no significant differences in quality (texture, taste, etc.) were ultimately noticed in the fish fillets between the Hermetia-fed animals and the control group fish.

Throughout the world, a number of firms are already stepping up the production of insect proteins on an industrial scale; the most important ones are AgriProtein from South Africa and Enterra from Canada. They produce larvae and their derived products of the species Hermetia, Musca and Calliphora on the basis of organic waste products. The goal of the companies is to achieve a respective annual production of several thousand tons of insect flour per site. Also, both companies sell the residues of insect composting as fertiliser or soil conditioner and the extracted fat as “MagOil”. Several small firms in Europe distribute insect flours and larvae for the pet food market.

... but many open questions remain. The University of Wageningen in The Netherlands ought to be mentioned as one of the most important and premier research centres in the field of entomophagy – the eating of insects – and the use of insects as animal feed and food. In May 2014, more than 600 scientists and industrial representatives gathered at the “Insects to feed the world” conference to discuss the entire range of topics and problems in the branch. But although there is enough enthusiasm at workshops and congresses, some problems still remain unsolved. In this context, legislation in Europe is of particular importance since it does not allow insect flours to be fed to livestock animals, including fishes. Neither do regulations for the feed basis for the feeding of the insect larvae exist that are satisfactory for this young branch of industry. Food waste graded as potentially risky (so-called K3 material, which is of animal origin) may not be used as livestock feed in the European Union (EU). This applies to insects as well, for they too are regarded as livestock. Neither may animals that have been fed with insect flour be imported. These restrictions are not in force on the Asian, South American and African markets nor in Europe outside the EU (e.g. in Turkey). Swiss authorities are currently assessing the authorisation of Hermetia flour as a fish feed additive.
Furthermore, a number of technical problems still have to be tackled. As yet, there is no proof of the efficiency levels in the production and processing of insects and insect flours yielding a return of invest within a minimum of time. There are still considerable economic risks. It can only be hoped that both at European level and world-wide, political decisions will be taken as soon as possible facilitating a further development of the branch.

Research at EU level
In addition to production technologies for the breeding of Musca domestica and H. illucens, an EU research project called “PROteINSECT” focuses its activities on the safety and quality of products and on environmental aspects. A further European venture has been initiated in France by research and industrial partners. The project, named “DESIRABLE”, deals with the development of production methods for various insect species in the context of a so-called bio-refinery. Different products (proteins, fats, functional biomolecules, chitin/chitosan) are to be produced on an industrial scale. The project also concentrates on the development of insect-based feed for fish and poultry.

Referenes and sources for further reading:

Buser, A., 2014: Analyses of partial substitution of fishmeal in the diet of rainbow trout (Oncorhynchus mykiss). Master thesis in agronomical sciences majoring in animal science.