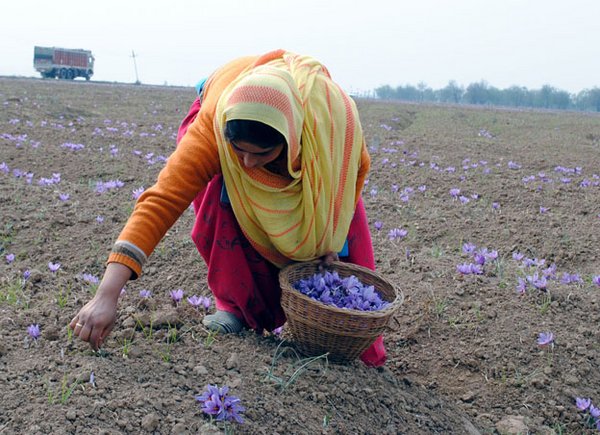 Kashmiri saffron, famous for its uniqueness in the world, is facing multiple challenges. The government is supporting the farmers with a range of measures. It recently launched a weather-based crop insurance scheme, which the farmers had long been calling for. However, it is unable to do anything about the deterioration in prices brought about by fake products.

The production of saffron (Crocus sativus) plays a significant role in the economy of the Himalayan state of Jammu & Kashmir in northern India. Saffron is the second largest industry in this Himalayan region next to horticulture industry, providing livelihood support to more than 20,000 families. Cultivation of this lucrative crop in Jammu & Kashmir dates back to 500 AD. The mountainous state has a monopoly in saffron production in India, although the country still needs to import as Jammu & Kashmir produces between 10 and 15 metric tons against its total demand of around 40 metric tons.

Often termed as the king of spices, besides Iran and Spain, saffron is only grown in Kashmir. The crop grows once a year. During saffron collection, strenuous efforts are needed to separate the stigmas – the ultimate product – from the saffron flower. Production in the Kashmir region reached its peak in the 1990s with an annual average of around 15.5 metric tons over 5,700 hectares, but both acreage and yields have declined since then, with per hectare production at less than 2 kilograms compared to around 6 kg in other parts of the world.

In recent times, many drawbacks have arrested the growth of this industry in Kashmir. Apart from extreme weather events like droughts or excessive rains, which often result in crop failures or less yields, lack of high yielding cultivars, low crop productivity and production of fake saffron have remained the challenges for Kashmir’s saffron industry. According to Professor Firdous Ahmad Nahvi, who has been working with saffron farmers in Kashmir for many years, the land under saffron cultivation had declined from over 5,000 hectares in 1996/97 to 2,880 hectares by 2006, but has again reached to 3,785 in present times thanks to the incentives given to farmers for the cultivation of saffron under the national saffron mission. Most of the saffron is cultivated by small and medium-sized farmers (with farm sizes of a maximum of 2.5 hectares).

Weather variables like temperature, rainfall and humidity play an important role during the growth of the saffron crop. Any deviation in these variables, agricultural scientists say, can result in complete or partial damage to the crop. “It (saffron) is a unique plant whose active period and effective growth occurs in fall and winter. Corm sprouting, flower initiation and time of flowering are the critical stages that are influenced by environmental fluctuations in terms of temperature and availability of water,” Firdous Nahvi, who has carried out extensive research on saffron, mentions in one of his studies. “Usually, the critical months of September and October are dry, and thus flowering is delayed due to delayed sprouting which does not correlate with critical limits of day and night temperature, thereby, effecting crop productivity.” Till 1999–2000, he writes, Kashmir was receiving well-distributed precipitation in terms of rain and snow to the extent of 1,000–1,200 mm which at present has decreased to 600–800 mm.

To cover the weather related risks of the farmers, the government of Jammu & Kashmir, following repeated requests from saffron growers, has implemented the “Weather Based Crop Insurance Scheme (WBCIS)” from the current year on. According to Muneer Ahmad Kumar, a technical officer in the agricultural department, WBCIS will protect the farmer against any crop loss as a result of adverse weather conditions.

Kashmir’s Joint Director Agriculture, Altaf Andrabi, says that weather factors have caused partial crop failures in recent years, thereby reducing income of farmers.
Crop insurance, he maintains, is one alternative to manage risk in yield loss by the farmers. According to Andrabi, the saffron crop will be covered for dry spells and insufficient or heavy rainfall, and the agriculture department will share 50 per cent of the premium which the farmers have to pay to the insurance companies.
As per the scheme, one hectare of saffron land will be insured against Indian Rupees (INR) 200,000 (USD 3,225), and the premium to be paid will be 12 per cent of the insured sum. For example, a farmer growing saffron over a hectare of land would have to pay INR 24,000 (USD 387). But since the government is sharing 50 per cent of this amount, he will have to pay only INR 12,000 (USD 193).

According to Kumar, experts have already given guidelines on weather variables to the department which are being shared with the farmers. “These guidelines or trigger events and the weather data from the Automatic Weather Stations (AWS) of the metrological department will independently verify adverse weather events,” he says. “So, the insured is not required to submit proof of loss; the weather data will automatically decide the compensation paving way for speedy settlement of claims.” The scheme was supposed to start from September 2014, but destructive floods stalled the process of its implementation. “Had it got implemented last year, we would have got compensated for 70 per cent crop-loss to excessive rains,” says Abdul Majeed, president of Saffron Growers Association. “We strongly regret this, although we are happy that our crop will be covered by insurance from this year. We are going to deposit the premium within a few days.”

Kashmir’s agriculture department, under the National Mission on Saffron, has been making efforts to create deep bore wells at the saffron karewas to ensure timely water supply to the saffron fields through pressurized sprinklers. One of these sprinkle irrigation system projects, which will provide drip irrigation facilities to 24 hectares of saffron land, was completed in December last year at a cost of seven million rupees (USD 112,903), while many others have already been completed for the use of farmers at a cost of more than 20 million rupees (USD 322,580).
On the other hand, the World Bank, with the support of the Indian Council of Agricultural Research, through its “Value Chain on Kashmir Saffron” project, is helping farmers to boost production and quality using scientifically correct techniques. Through this project, farmers are provided with improved planting material that has been treated with fungicides. Nutrient-management trials are also conducted to show them how to apply appropriate levels of fertiliser.

Experts say that there are many gaps in saffron farming that need to be plugged. “For instance, farmers do not observe grading of corms – small and large. So they have to be taught how to optimise the plant population, which is mandatory for a rich yield,” says Aijaz Ahmad, a researcher who has worked with saffron growers.
“But now, with the help for farmers under the saffron mission, farmers have started growing saffron with scientifically correct methods,” he maintains. According to Nahvi, farmers are given a subsidy of INR 264,000 (USD 4,258) per acre of saffron land for cultivating saffron in line with scientific technology and methods. “Through this scheme, 50 per cent of the saffron land has been brought under complete scientific cultivation of saffron,” Nahvi explains.

“The credibility of our saffron has suffered a huge dent because of the production of fake saffron, which is passed off as pure Kashmiri saffron in the markets and is sold at far lower prices,” says Ghulam Mohammad, a Saffron grower of Pampore, south Kashmir. “With the slump in prices, we aren’t getting buyers for our genuine product.”
Abdul Razaq, another saffron grower, views smuggling of saffron from Iran as a further major concern: “Saffron from Iran is smuggled to India and is then re-branded as Kashmiri saffron. This smuggled saffron is later sold as genuine Kashmiri saffron in Indian and international markets against low prices,” laments Razaq.
With reduced market credibility and lack of support from the government in stopping circulation of fake saffron in the market, some saffron growers have sold off their land. “Under the Saffron Act, there is a complete ban on converting saffron land into residential areas, but unfortunately, both buyers and sellers get away with it because of government apathy,” observe agricultural experts.