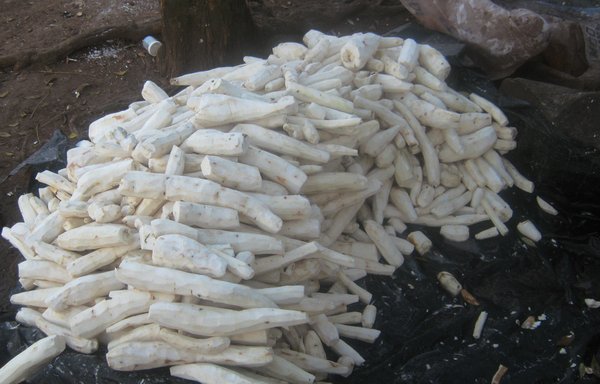 Up to 6.6 per cent of fresh cassava tubers (l.) are lost in harvesting and storage at the farm;
Photo: A. E. Oguntade

In order to evaluate losses in the value chains of maize and cassava, GIZ (Deutsche Gesellschaft für Internationale Zusammenarbeit) conducted two surveys in 2012/2013. They comprise (1) an estimate of losses in terms of volume and money and recommended countermeasures, and (2) a calculation of the ecological footprint resulting from these losses through the unnecessary use of soil and water, loss of biodiversity and emission of greenhouse gases.

Where are the biggest losses?

With its annual yield of around 40 million tons, Nigeria is the world’s largest producer of cassava. The lion’s share is grown by smallholders. The most important value-added chains are the production of Gari (fermented cassava) for local food supplies and the manufacture of industrial starch. Broken down in terms of the individual stages in the production processes, the losses are as follows:

Maize is usually grown side by side with other crops by smallholders in Nigeria. In 2005, overall production was at around 10 million tons. The main value-added chains are the production of animal feed, making maize flour for human consumption and, to a small extent, using green maize for direct human consumption. Losses during harvesting were estimated as 4 per cent of the total harvest, while shelling, storage of dry maize cob and dry maize grain and transport of fresh maize to the market caused losses between 1.5 per cent and 2.3 per cent. Altogether, the losses on the farm were around 13.7 per cent. All in all, marketing is the process stage with the highest losses, accounting for up to 26 per cent. Lower but nevertheless still considerable losses occur in animal feed production (around 12 %). In total, the losses can be extrapolated to around 2.2 million tons of dried maize grains across the whole country, corresponding to a per capita loss of 13.5 kilograms. Total losses (including losses in the maize value-added chain) amount to roughly 576 million euro.

What does this mean for the environment?

The environmental impacts of post-harvest losses were calculated using the life-cycle analyses of the production of both cultures. As can be expected, land use for production emits the largest amount of greenhouse gases (GHGs), whereas transportation and processing have a much less significant effect. In addition to GHG emissions, water consumption, soil use and the potential loss of biodiversity were assessed. The carbon footprint of cassava in Nigeria is relatively high (e.g. in comparison to Indonesia), which can be traced back to the low yields and hence to an ineffective use of natural resources such as soil and water. Since cassava and maize are grown in rainfed cultivation, water deprivation is relatively harmless, and at 18 cubic metres/ton, it is only conspicuously high in the processing of cassava starch. To illustrate the impacts involved, the water needlessly consumed owing to losses would be enough to cover the minimum water demand of 150,000 people, given that a person’s basic needs require 50 litres a day according to UNESCO.

Losses in the cassava and maize value chains contribute 2.3 million tons of CO2 equivalents to global climate change, which corresponds on average to the 4.5-fold per capita emission of a Nigerian or 3.3 per cent of total GHG emissions in Nigeria. Even if the data has to be interpreted with caution owing to a number of inconsistencies in the data base, this still indicates an enormous GHG potential of post-harvest losses. Moreover, the amount of maize and manioc losses corresponds to 21 per cent of the farmland that these crops are grown on.

The surveys clearly demonstrate that the environmental impacts of losses in the value-added chains are significant, also in relation to the natural resources of Nigeria as a whole. Thus, in addition to representing a positive contribution to world food supplies, a reduction of losses in the agricultural value chains could enhance Nigeria’s efforts to combat climate change.