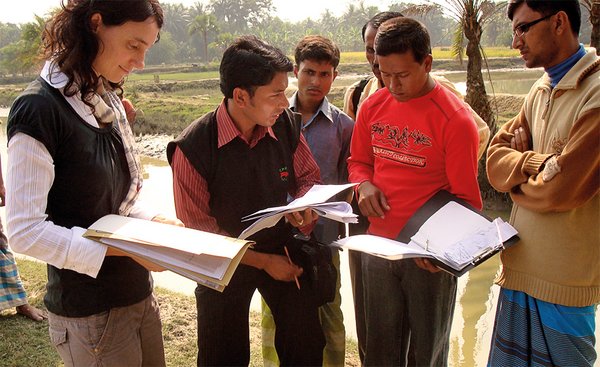 Often with just one or two ponds managed by a single person or family, smallholders make up an important share of the world’s seafood production. So why are by far the minority of certified aquaculture operations smallholders?

Developing countries account for the bulk of aquaculture production and smallholders dominate the rural landscape throughout the developing world (The WorldFish Center, 2011). Particularly in Asia there is a high concentration of smallholder fish farmers. Certification of seafood production in developing countries generally relates to export markets. A single smallholder does not have the harvest volumes to export alone. Rarely can a single smallholder handle the documentation requirements, administrative work and fees associated with certification. Amongst other reasons, this is why smallholders form groups for certification.

The pros and cons of group certification

When smallholders form cooperatives, associations or groups (the term typically used in certification language), small farms can gain access to finance, technology and export markets otherwise not feasible for a single smallholder. This is often achieved by being able to offer larger harvest volumes and having a supporting structure to handle marketing and trade issues. Within such groups, production is often improved thanks to knowledge transfer and resource sharing. In addition, costs for external services (e.g. certification) can be shared within the group.

One difficulty is “who” should organise and “how” to organise such groups. Typically in aquaculture, there are three different systems: a) farmers increasingly working together to support each other and be stronger as a group than as x individual farmers, b) a processor selects similar farms to source from and control using group systems, and c) a company/organisation contracts farms to produce on its behalf. While external support increases from a) to c), so does dependency. This is true for both sides. While farms can benefit from external support, reduced risk, more stable income and access to an export market, they may be bound to fixed sale prices or have to buy inputs from the group. The buying entity, for its part, can profit by sourcing from smallholders and selling to more consistent and premium export markets, but can also lose contracts with importers if smallholders sell elsewhere when prices on the local market rise temporarily. While a) has much less risk of dependency, these types of associations are not always strong enough to develop and maintain export markets. There is a fine line between support and dependency; it can be tricky to find a feasible long-term and fair balance between the two.

While sourcing from smallholders in an attempt to fight poverty and improve food security does fit the vision of some retailers, there is a general scepticism about traceability, and to a certain extent, about food safety and supply chains in general. If not very familiar with group systems, it is difficult to understand how an effective internal control system (ICS; see box) can work. There are also differing opinions and some confusion as to what level of traceability there should be in a group system. While a traceability system can be implemented to the lowest level, in this case a single smallholder (farm or hatchery), it is questionable whether product segregation efforts down to this level really make sense. If harvests of a couple of kilos cannot be pooled and must be transported, processed and stored separately, the system becomes inefficient and the group benefit is largely lost. It makes more sense to look at an ICS as a farm with many ponds. If there is reason to block products, an ICS can be suspended in the same way that a single large farm can be suspended.

Why are not more groups certified?

A further aspect which seems relevant is the recent tendency to go heavy on documentation and complexity of requirements. While previously a standard holding body was closer to the farm and a good management system was considered key, a more recent development is to assure independency and distance from the farm, and to rely on the recording of parameters. This makes it easier to evaluate and provide evidence (to stakeholders), which is probably the reason for this development. For smallholders, however, this is a tendency that strangles them. The majority of smallholders do not and cannot work with complex recording requirements. And the arguably more valuable aspect of an association such as social mechanisms (structure, support and control) instead of recording are currently not part of group certification requirements. A shift from these administrative and documentation requirements to using other mechanisms as evidence for a well-functioning association would have to be addressed in group certification requirements if smallholders are to make up a larger share of certified farms. The complexity of setting up such group systems correctly is often underestimated. This is one of the reasons why such systems have sometimes failed in the past. In spite of this, there are a number of well performing groups which show that this concept, given an appropriate set-up, certainly has a future.

There is also some debate and controversy over the question whether smallholders should benefit from simpler requirements to allow their participation in the certified market. Conversely, it is difficult to communicate to consumers why a labelled product may have been produced according to two different sets of requirements.

Seafood standards – a complex system
In aquaculture, certification usually relates to a set of standards as to how an aquaculture operation should be managed and fish should be farmed (e.g. feed ingredients, effluent thresholds, input restrictions). A farm is audited against this set of standards. If production is adequately compliant, the farm is certified as being in conformity with these standards. Standards thus often only address the production system. A standard can then be applied, depending on the scope, to different farm structures, most typically a single farm. This is where things become complicated. A group of smallholder farms, compliant with production system requirements, may not be certifiable if the standard does not allow for group systems, or does not have group certification requirements.

What is required to certify a group?
Besides the production system, group structure requirements are needed in order for a group to be certified. The way this typically works is that the group implements an internal control system (ICS), mirroring the tasks of a certification body. When the actual external certification body comes on site, it mainly audits the systems and functioning of the ICS, combined with on-site spot checks of group members’ farms and their documentation. The size of certified groups can vary – most have something in the order of 30 up to several hundred group members.