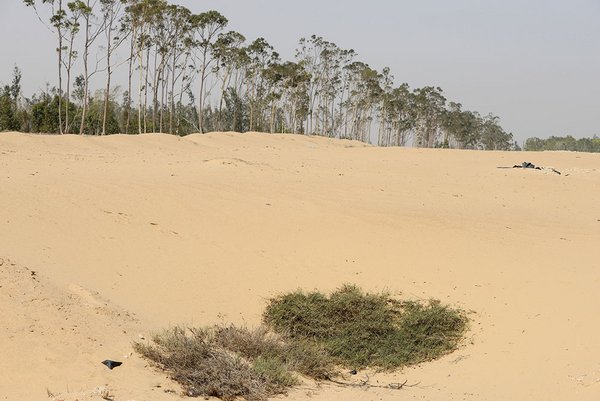 Forestry in the desert – not an impossible venture, as the Serapium Forest Project demonstrates.
Photos: Jörg Böthling

Action on climate change and dryland conservation, wastewater recovery and sustainable forestry, income generation and job creation. A joint research project by the universities of Cairo and Munich shows how multiple issues can be addressed simultaneously – if policy-makers focus on long-term benefits rather than quick profits.

Trees are a rarity in Egypt. Ninety-six per cent of the country is desert; most of the remainder is intensively farmed or built-up alluvial land on the banks of the Nile. So it is surprising to spot a row of trees on the horizon, their darkness contrasting with the vast, glaring expanse of yellow sand. A mirage? Far from it. A narrow road, bordered by eucalyptus trees up to 15 metres tall, brings the car to the entrance to the Serapium Forest. On this 200-hectare site on the west bank of the Suez Canal, timber is growing in the scorching heat of the desert. And not just growing, but growing fast. “Look at how tall that tree has become in just 20 years,” says Hossam Hammad, tapping on the bark of a eucalyptus that has cracked from heat and drought. “One metre in circumference – elsewhere it would have taken 100 years to do that,” continues Professor Hammad, who teaches in the Faculty of Agriculture at Ain Shams University in Cairo.

Sewage recognised as an important resource

The Serapium Forest is part of a project launched by the Egyptian government more than 25 years ago. Timber has been planted at 36 different desert sites that between them cover 4,000 square kilometres. Most of the trees are fast-growing construction-timber species such as eucalyptus, acacia, casuarina and cypress. These state forests in the desert are irrigated using pre-treated sewage effluent. This is available in abundance in the country on the Nile. Egypt’s 97 million inhabitants produce seven billion cubic metres of sewage per year. As a result of the human body waste, the sewage contains valuable fertiliser.

The Serapium Forest’s water reservoir provides the next surprise. It doesn’t smell. The giant pool of water glistens invitingly in the harsh sun. The desert wind creates waves on the silvery surface. The mixed sewage comes from the nearby city of Ismalia. Solid matter has been removed using a sand filter. In this pool, oxygen and microorganisms are added to the water. They decompose organic compounds, thus removing any smell. Every day, this process produces 2,000 cubic metres of water that is rich in phosphates and nitrogen compounds – a perfect fertiliser that normally sells for a high price. “It is largely because of these constituents that the trees grow so fast,” explains Hossam Hammad. The sun does its bit too, beating down with a force of around 2,200 kilowatt-hours per square metre per year.

A perfect example of the combination of conservation and use

Each year, the world’s deserts are expanding by up to 70,000 square kilometres – an area the size of Ireland. Forests are the most effective form of protection against desertification. Use of the vast quantities of sewage that otherwise pollute Egypt’s soils and its life-giving river, the Nile, could promote the greening of 650,000 hectares of desert. But that’s not all. There is a big market for timber in Egypt and neighbouring countries. Experts put its value in Egypt alone at 1.5 billion US dollars per year. Hitherto, Egypt has had to import almost all the timber it needs. The fast-growing trees are ready to harvest in just 11 to 15 years, and they yield an average of 350 cubic metres of timber per hectare. They provide work, too. The Serapium Forest employs just 20 people, who see to irrigation, tree care, reforestation and the cultivation of seedlings. But many more jobs could be created if large-scale timber production were to provide the basis for a processing industry that could manufacture products such as furniture and medium-density fibreboard.

“There could be all sorts of benefits from this idea,” says Hany El Kateb, an Egyptian-born researcher who is a forestry scientist at the Technical University of Munich in Germany. He has provided scientific advice to the afforestation project in the Egyptian desert since its inception. His latest research project, which involves collaboration with the German Academic Exchange Service and Ain Shams University, aims to advance key aspects of forest management in the desert. “We are exploring which tree species work best with which methods and how they can be marketed.” This is why, for more than five years, almost 30 different types of trees have been growing on a ten-hectare site in the Serapium Forest. In addition to the drought-resistant, fast-growing construction timber there is neem, tamarisk, the energy plant jatropha and expensive woods such as teak, mahogany and Indian palisander. The dense and varied growth in this part of the forest is surprising. Hossam Hammad points to a very straight and tall specimen of the mahogany Khaya senegalensis, a hardwood that is particularly suitable for furniture. “Thirty-five centimetres in circumference and ten metres tall – in just five years!”

Searching for the best type of tree

While a eucalyptus forms biomass twice as quickly as a hardwood, the hardwood fetches a price ten times higher. It doesn’t need much more water, but it cannot withstand drought. Moreover, the seedlings of teak and mahogany are very delicate. The hardwoods also need more attention: in particular, they must be pruned. Pines, by contrast, grow straight and tall by themselves. “Above all we want to find out what sort of irrigation each species needs to grow best.” Each tree species has a different function in the forest. For example, the casuarina binds valuable nitrogen in the soil and its rolled-up leaves, which look like pine needles, form a thick layer on the ground that retains moisture. Both properties benefit the other trees in the plantation. This means that the research on these ten hectares could help to improve both the profitability of commercial forests and their biodiversity.

“We see the use of sewage effluent and drylands as an opportunity to develop a viable model for sustainable forestry in arid regions,” says Dirk Walterspacher of Forest Finance. The company, based in Bonn, Germany, has already established semi-natural working forests in Panama and Vietnam. “This is where action on climate change, wastewater recycling and sustainable forest management come together,” Walterspacher continues. The Serapium Forest research project has been funded mainly by Forest Finance, which has drawn on its own capital and German government funds. But it has not yet been possible to create an investment product. Too many problems stand in the way, because forestry is uncharted territory in Egypt, an almost treeless country. There are no experts and no service providers. Since the revolution of 2011, the political situation has been unstable. Postholders changed frequently, knowledge was lost, agreements were not adhered to. There was and is corruption, and damaging decisions have been taken. As a result, for example, a disease damaged the trees in one part of Serapium due to careless maintenance. The workers had to cut down all the trees at once instead of harvesting little by little. Hossam Hammad points towards the clear-cut area where workers are struggling to plant new seedlings in the scorching sun without wind protection and shade. Shaking his head, the professor explains that this will only result in a loss of fertile soil and harms the micro-climate.

Ethiopia’s new dam project on the upper reaches of the Nile is creating major uncertainty. It is leading to water scarcity in Egypt and hence to greater demand for wastewater. At present, use of wastewater to grow food is not permitted, but this may change. Providing the population with affordable food is a priority for Egypt’s military government. High bread prices were after all one of the triggers of the 2011 revolution.

Despite all these problems, Hossam Hammad and his partner Hany El Kateb are convinced that forestry in the desert has a great future. The results achieved on the ten-hectare research site have proved this. Dirk Walterspacher of Forest Finance is also continuing to follow the project. So the time may soon come when the sight of rows of trees on the horizon in the Egyptian desert is no longer surprising.

Klaus Sieg writes about agriculture and food, the environment, energy, the economy and social issues. He is based in Hamburg, Germany.
Contact: klaus@siegtext.de