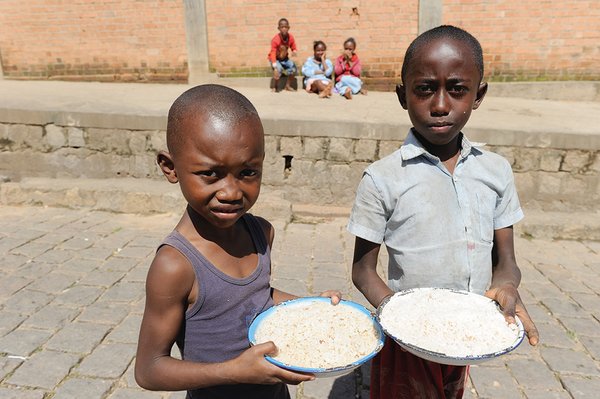 Representatives of civil society organisations criticise that the right to food is not mentioned in any target of the SGDs; they demand more recognition of rightsbased approaches.
Photo: J. Boethling

Food and nutrition security in the SDGs – where are we heading?

The demand to eradicate extreme poverty and hunger has been the centrepiece of the Millennium Development Goals; the first MDG stands for the inextricable link between poverty and people’s ability to access safe, nutritious and sufficient food. How will the objective of achieving global food and nutrition security be embedded in the SDGs? Will the SDGs be a further step towards this target?

Since the Millennium Development Goals were developed in the aftermath of the UN Summit in 2000, the perceived relevance of global food security has rather increased: the food price crisis 2008/09 brought more attention to the global dynamics around food security, such as changing demographics and consumption patterns, effects of climate change, or international trade and price trends. It was also a stark reminder of food security’s importance for political stability when several countries experienced civil protest during the height of the food price crisis.

How food and nutrition security (FNS) and agriculture will feature in the new post-2015 development agenda is now crucial. The agenda is meant to reflect all these new dynamics in a more comprehensive, universal, sustainable and integrated set of goals.

Where we currently stand

The United Nations Rio+20 conference resolved the development of a global set of goals and targets that would be universally applicable to all nations. The new set of goals was to combine development and sustainability aspects. The proposal by the intergovernmental Open Working Group (OWG) for such a set of  Sustainable Development Goals (SDGs) was acknowledged by the United Nations General Assembly (UN GA) in September 2014, when it also decided that the proposal shall be the basis for integrating SDGs into the post-2015 development agenda (Resolution A/68/L.61).

Among the proposed 17 goals and 169 targets, Goal 2 and its five targets are most prominent in terms of food and nutrition security. Goal 2 focuses exclusively on “end(ing) hunger, achiev(ing) food security and improved nutrition, and promot(ing) sustainable agriculture”. Rather than combining poverty and hunger in the same goal, as in MDG 1, the proposal contains a stand-alone goal dedicated to food security.

One key aspect is the eradication of hunger and achievement of food and nutrition security, similar to MDG 1c. However, while MDG 1c only considered caloric intake, the newly proposed goal specifically refers to ending “all forms of malnutrition”, including undernutrition, “hidden hunger” (lack of essential nutrients) as well as forms of overnutrition, such as obesity.

What is also new compared to the MDGs is a target on doubling agricultural productivity and the incomes of small-scale food producers that stipulates several conditions, such as access to productive resources and opportunities for non-farm employment. While these first three targets focus more on the social and economic dimensions, the remaining two mainly cover the environmental dimension. Target 4 asks to “ensure sustainable food production systems”, highlighting the need to maintain ecosystems and to improve land and soil quality, among other things. The last of the five targets specifically addresses the aim to maintain “the genetic diversity of seeds, cultivated plants, farmed and domestic animals and their related wild species”.

Three “means of implementation” (MoI), which have been included for each goal to highlight the requirements for the realisation of the targets, list important measures, including (2.a) increasing investment in rural infrastructure, agricultural research and extension services, etc., (2.b) the prevention of trade restrictions and distortions and (2.c) the proper functioning of markets.

Besides being addressed in Goal 2, food and agricultural aspects are also integrated throughout the proposal, beginning with paragraph 2 of the Preamble referring to the commitment reiterated at the Rio+20 conference to “freeing humanity from poverty and hunger as a matter of urgency”.

The way the agenda reflects food and nutrition security (FNS) and agriculture is quite comprehensive and clearly goes beyond the MDGs. Goal 2’s heading “end hunger, …” leaves no doubt that the level of ambition is higher than in the MDGs. Rather than defining time-bound incremental steps, the proposal aims at the final goal of eradicating hunger within a generation.

The international community’s intention to have universal goals – that present a challenge not just for low-income countries but also for middle- and high-income countries – is reflected in various ways, among others:

Another requirement for the goals was agreed in the Rio+20 outcome document, paragraph 247: They should be “action-oriented, concise and easy to communicate, limited in number”, or what is often referred to as SMART (specific, measurable, attainable, realistic, time-bound). In the proposal, including Goal 2, most of the target phrases do not yet fulfill these criteria and would benefit from sharpened wording.

With the current content of the goals, the proposal broadly reflects the global policy consensus on FNS that has evolved over the past years through international dialogue in fora such as the Committee on World Food Security (CFS), the G7 or G20, or within the UN agencies.
However, international and German civil society organisations in the field of FNS have criticised some aspects. They deplore, for example, that the right to food is not mentioned in any target and demand more recognition of rights-based approaches. Neither is the environmental dimension integrated sufficiently into the targets in their view. Another concern is that the private sector should be assigned more responsibility for sustainable development and be held accountable.

In the intergovernmental process of the Open Working Group, there was reportedly not much controversial debate on the targets surrounding FNS and agriculture, except for agricultural biodiversity and trade. Most other discussions touched on details in wording.

While the phrasing of the goals and targets is of course significant, there is actually a lot more to the agenda. Whether the SDGs will really trigger action and make a difference in food and nutrition security and agriculture depends on several other determinants of the future agenda that are still being developed and debated:

1. Indicators: The targets will be concretised and be made measurable through indicators. As yet, not even the process for developing the indicators has been decided. Agreeing on the indicators will then be another challenging task. While in some cases, it is more a question of which and how many of the potentially suitable indicators to use (for example for food security), in others, it is still a question of how to measure the targets at all. Which indicators can be used to measure sustainable agriculture? Or the level of food and post-harvest losses? (See also "Monitoring progress on agriculture and rural development")

2. Monitoring: Another important question is what kind of monitoring and review system will be established to track progress with the indicators and with achieving the SDGs – the OWG proposal speaks of an effective and robust mechanism. An international accountability system needs to be agreed and national capacities be built for it. Data availability andquality will be a challenge for many of the food-related targets.

3. Financing sustainable development: Also, the parallel process of Financing for Sustainable Development, leading up to the International Conference on Financing for Development in Addis Ababa in July 2015 and constituting an important contribution to the post-2015 development agenda, is expected to influence the implementation of the agenda through available and promoted means of financing. How much will the implementation of the agenda cost, and how will the costs be covered?

4. Other goals in the agenda: Whether or not there will be advances with ending hunger and malnutrition will depend not only on the specific wording in Goal 2, but also, of course, hugely on progress in other targets. For example, improving food and nutrition security in fragile states and complex emergencies is a major challenge which requires a multi-sectoral policy approach and advances with Goal 16 on promoting peaceful and inclusive societies. Another challenge will be the ongoing structural transition in rural areas, where urbanisation, migration, changing demographics, and climate change are having a huge impact on income and employment opportunities in farming. Policy answers to facilitate a ‘gentle’ transition will need to include a range of different approaches from large-scale employment creation in rural areas, to infrastructure investment and social security policies.

5. National targets: It is envisaged that all governments will set their own national target levels – “guided by the global level of ambition but taking into account national circumstances” (paragraph 18, OWG proposal). This will of course depend on each country’s development status and available capacities and resources. However, all countries have a certain scope or “room for manoeuvre” to determine their level of ambition. It is extremely important, if not decisive, that the government has a strong political will to take the agenda seriously and that its citizens demand adequate action.

6. Global partnership: The determination of the international community as a whole, where the level of national ambition and global ambition mutually reinforce each other, will be equally important for the realisation of the agenda. The OWG proposal thus makes clear that the goals’ implementation will depend on “a global partnership for sustainable development with the active engagement of governments, as well as civil society, the private sector, and the UN system”. FNS and the promotion of sustainable agriculture have to be a key concern of this global partnership: Relevant actors need to push for an ambitious agenda setting and for mobilising coherent action of all actors.

Over the past years, various governments have made commitments to tackle food and nutrition insecurity as a priority issue, e.g. with low-income country governments developing national strategies and becoming part of the SUN (Scaling-Up Nutrition) movement, or African governments following the CAADP (Comprehensive Africa Agriculture Development Programme) process. Many high-income countries also made policy as well as financial commitments, most famously at the G8 L’Aquila Summit pledges in 2009. Several efforts for increased global policy coherence and coordination were made, in fora like the UN, the G7 and G20, or the CFS. The reform of the Committee on World Food Security (CFS) in 2009 was one example of shaping global governance and opening up the space to other stakeholders, especially civil society organisations and private sector representatives.